Warm-hearted gesture or an over-familiar faux pas with the new King? Liz Truss sparks debate after firmly grasping Charles’s arm in their first ever meeting following the Queen’s death

It was doubtless intended as a touching gesture to ease the new King’s grief. But it has sparked a debate on whether the Prime Minister had inadvertently breached Royal protocol.

On Friday, in her first audience with King Charles, Liz Truss was seen to hold the Monarch’s left arm tightly as they spoke.

The close encounter at Buckingham Palace appeared to come as Ms Truss expressed her ‘very, very sincere condolences’ and the King confided that his mother’s death had been ‘the moment I’ve been dreading’. 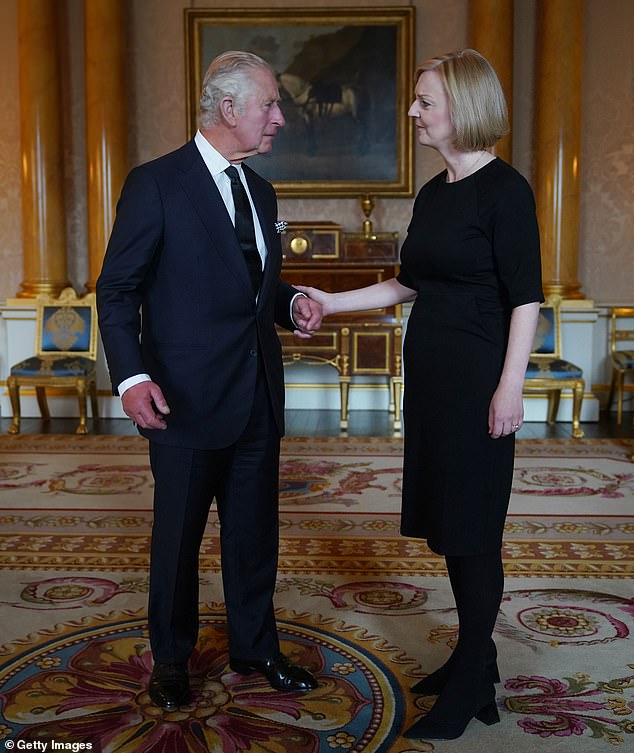 On Friday, in her first audience with King Charles, Liz Truss was seen to hold the Monarch’s arm and shake his hand

It also came after a prolonged handshake between the King and the PM, who had curtsied to the new Sovereign as she was formally announced.

But whatever her good intentions in holding the King’s arm, Royal biographer and historian Hugo Vickers said last night that, strictly speaking, the new PM had indeed overstepped the mark.

However, Mr Vickers said he was sure that King Charles ‘wouldn’t have minded in the least’.

He told the Mail on Sunday: ‘On a very strict interpretation of Royal protocol rules, the PM should not have held the King’s arm in this way.

‘The rules are that you leave it to the King to do the arm touching.

‘The Royal Family is supposed to initiate the contact. You don’t do anything – you keep yourself to yourself.’

However, Mr Vickers – whose books include Elizabeth, The Queen Mother and We Want The Queen, about the 1977 Silver Jubilee – said he was certain the PM’s tight hold would not have disturbed King Charles. He said: ‘On this occasion, I would give her [Ms Truss] the benefit of the doubt and being sympathetic to the King at this very emotional moment. 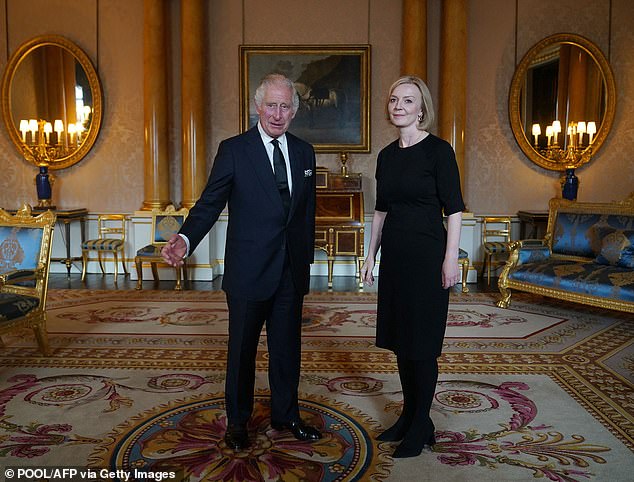 The close encounter at Buckingham Palace appeared to come as Ms Truss expressed her ‘very, very sincere condolences’ and the King confided that his mother’s death had been ‘the moment I’ve been dreading’

‘It was probably the point where King Charles said that he had been dreading this moment.

‘He certainly wouldn’t have minded in the least and that’s what it comes down to.’

The apparent protocol breach will appear minor compared to the furore that occurred in Australia in 1992 – when the then Australian prime minister Paul Keating was dubbed the ‘Lizard of Oz’.

He had put his arm round Queen Elizabeth during a Royal visit Down Under.

In 2009, Michelle Obama – wife of then US President Barack Obama – raised eyebrows on a State Visit by reaching in for a hug with Her Majesty while at Buckingham Palace.

The former First Lady reflected on the moment in her 2018 memoirs, writing: ‘If I hadn’t done the proper thing at Buckingham Palace, I had at least done the human thing.’

She also revealed how, in 2016, the Queen herself called the protocol rules ‘rubbish’ after asking the First Lady to defy convention and sit next to her in the car.

Last night, a Number 10 source explained the PM’s gesture, saying: ‘It was a very human moment – Liz wanted to express her deepest condolences to a son who had lost his mother.’