Pearl Harbour: In his first major speech as US Defence chief, Lloyd Austin has called for developing a “new vision” for American defence in the face of emerging cyber and space threats and the prospect of fighting bigger wars.

Reflecting President Joe Biden’s promise to put diplomacy first in dealing with foreign policy problems, the former general said the military should provide leverage that diplomats can use to prevent conflict. His comments suggested a contrast with what critics call the militarisation of UU foreign policy in recent decades.

“US military isn’t meant to stand apart, but to buttress US diplomacy and advance a foreign policy that employs all of our instruments of national power,” Austin said. 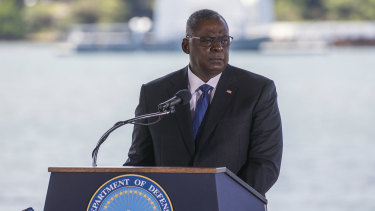 US Secretary of Defence Lloyd Austin, speaks at a change of command ceremony for the US Indo-Pacific Command in Hawaii on Friday.Credit:Honolulu Star-Advertiser/AP

He chose to spell out his ideas at Pearl Harbour, Hawaii, at the centre of US military power in the Indo-Pacific region, reflecting US concerns that China’s rapid modernisation and growing assertiveness make it a powerful adversary. Notably, Austin in his speech did not explicitly mention China or North Korea.

In his first four-plus months as defence secretary, Austin has focused less on big policy pronouncements and more on immediate issues like the US withdrawal from Afghanistan and internal issues like extremism in the military, as well as launching broad reviews of defence strategy.

Speaking with the USS Arizona Memorial and the Battleship Missouri Memorial in the background, Austin cautioned that the military could not be satisfied with believing it was the strongest and most capability military in the world today — “not at a time when our potential adversaries are very deliberately working to blunt our edge”.

He appeared to be referring to China, which other officials say has accelerated its military modernisation and sped up its construction of a wide range of sophisticated weaponry while the US was focused for two decades on combatting extremist groups like al-Qaeda in Afghanistan and, more recently, the Islamic State in Iraq and Syria. 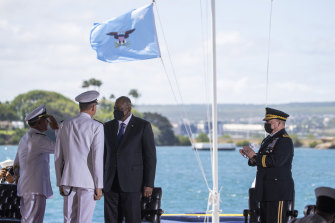 In his first major speech, Lloyd Austin on Friday called for developing a “new vision” for American defence in the face of emerging cyber and space threats and the prospect of fighting bigger wars.Credit:Honolulu Star-Advertiser/AP

Austin, who spent more than 40 years in the Army, including as the top American commander in Iraq during the last years of combat there, noted that he had spent most of the past two decades in “the last of the old wars.”

“The way that we fight the next major war is going to look very different from the way that we fought the last ones,” he said. “We all need to drive toward a new vision of what it means to defend our nation.”

He spoke at a ceremony marking the arrival of Admiral John Aquilino as the new commander of US Indo-Pacific Command, succeeding Admiral Philip Davidson, who has been outspoken in his concerns that China is proceeding with urgency to be in position to potentially take Taiwan by force within several years.

In his departing remarks at the ceremony on Friday (Saturday AEST), Davidson repeated his assertion that China was using “pernicious” behaviour to challenge US dominance in the region and to remake the international order in its image.

Austin mentioned no specific potential flashpoints for conflict in the Indo-Pacific region but said the US must develop a new vision of defence that takes greater advantage of new technologies, including quantum computing, artificial intelligence, and edge computing, which he described as a framework that allows data to be processed while it’s being collected, and to absorb and share it instantaneously.

Austin said US defence would continue to rest on maintaining deterrence, which he described as “fixing a basic truth within the minds of our potential foes: the costs and risks of aggression are out of line with any conceivable benefit”.

To keep that deterrent effect, the US military must use existing capabilities, develop new ones, and use all of them in new and networked ways — “hand in hand with our allies and partners”. This should be accomplished in alignment with US diplomatic goals and efforts, he added, in order to prevent conflict from breaking out in the first place.

“It’s always easier to stamp out a small ember than to put out a raging fire,” he said.

Can you see the snow leopard prowling over this ice-covered mountainside? – The Sun