Cryptic new clues in the Lord Lucan mystery can be unveiled by the Mail today in the form of Cluedo cards found by detectives at the time: Colonel Mustard, the lead pipe and the hall.

Almost 50 years after his family’s nanny was found bludgeoned to death by a lead pipe, it can be revealed that these three cards from the aristocrat’s board game were discovered in his abandoned car.

The tantalising development has never been made public before.

The trio of Cluedo cards appears to chillingly represent the grisly killing of Sandra Rivett – prompting the question of whether her death was planned. 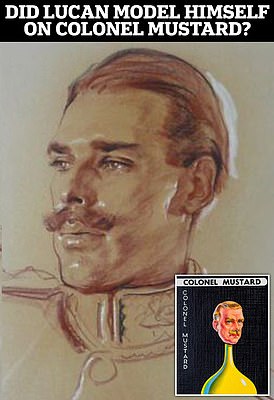 Lord Lucan went on the run after the Miss Rivett, 29, was murdered with a lead pipe in his Belgravia house. His wife Veronica survived a similarly brutal attack by the killer, whom she named as her Eton-educated husband.

While Miss Rivett’s body was found in the basement kitchen, forensic tests found blood at the top of the staircase in the hall.

Police probing the infamous 1974 murder found three cards were missing from the former Coldstream Guards member’s set of the game. They were located in the fugitive earl’s Ford Corsair car when it was found dumped in Newhaven, East Sussex, after he fled.

The bizarre twist has been unearthed nearly 20 years after Scotland Yard conducted a cold case review into the murder which still captivates the world.

The Mail has also uncovered a never seen before 1953 portrait of Lucan in his Army uniform, in which the then 19-year-old bears a striking physical resemblance to Colonel Mustard – raising the possibility that the killer modelled himself on the Cluedo character.

Of the six playing pieces, Colonel Mustard, who was originally called Colonel Yellow, is portrayed as a white colonialist and big game hunter. Like Lord Lucan, he is depicted as a dignified, dapper but slightly dangerous ex-military man.

Following a major Mail investigation, details of the Cluedo connection have been revealed by sources with knowledge of the Met’s 2004 review.

One former investigator said: ‘If Lucan did leave the Cluedo cards, it makes me think the whole thing (the murder) was pre-planned.’

He added: ‘It is interesting. It is strange. The more you think about it, the more it has got implications.’

The Mail has also learned that during the 2004 review, detectives became aware of another alleged sighting of Lord Lucan – which has not previously been reported.

Police tracked down and interviewed a woman who claimed that she met Lord Lucan at a party in Portugal after the murder. 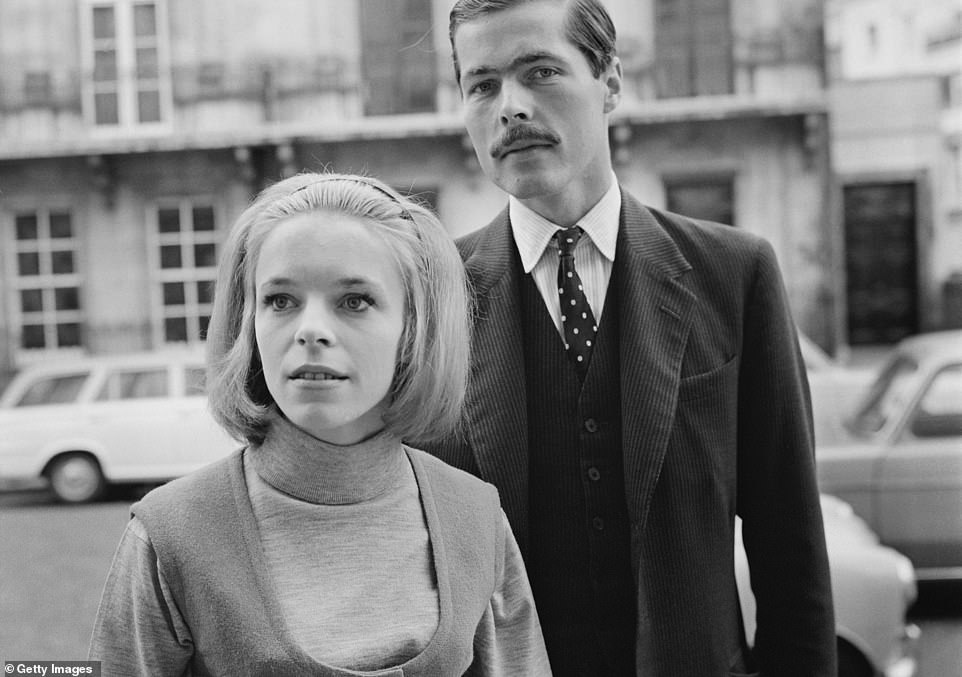 Lord Lucan with his future wife Veronica. He went on the run in 1974  after his family’s nanny was found dead in his home 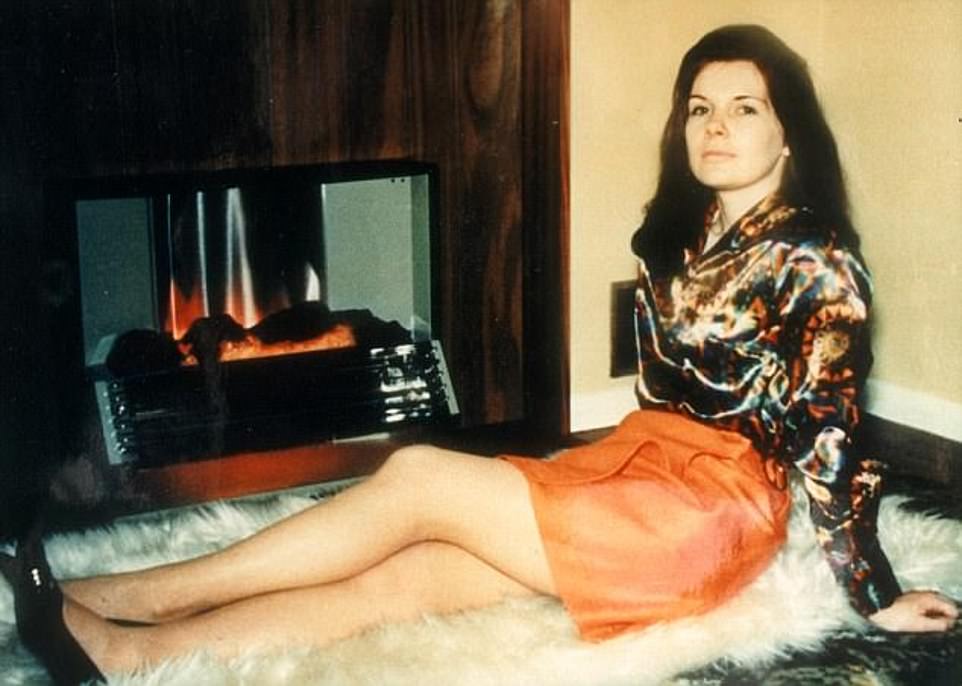 Sandra Rivett was beaten to death with a lead pipe. Her body was found in the basement kitchen of Lucan’s Belgravia house

She said she was introduced to the fugitive by one of his inner circle at a villa on the Algarve – but senior Yard commanders blocked launching a new inquiry into the case on cost and proportionality grounds.

A source said: ‘She was adamant she was introduced to him in the weeks or months following the murder. Was she genuine, was she credible – it was certainly a potentially significant lead which needed more work done on it.

‘Who invited her to the party? Who else was there? Who could corroborate what she was alleging?’

Over the years there have been hotly contested claims that the so-called ‘Clermont Set’ of rich gambling friends of the playboy father-of-three – including zoo owner John ‘Aspers’ Aspinall and tycoon James ‘Jimmy’ Goldsmith – helped the fugitive escape the UK for a new life abroad, possibly in southern Africa.

A number of ex-Lucan detectives are convinced that he did not jump to his death in the sea, as many have speculated.

In other revelations today, it has emerged that 20 years ago police considered using covert techniques to obtain the Lucan family’s DNA, to compare to the earl should he turn up alive. The idea was never pursued after Yard chiefs feared a backlash.

According to a confidential Met report obtained by Sandra Rivett’s son Neil Berriman, and now published on his website, Scotland Yard do not have a confirmed set of Lord Lucan’s fingerprints.

There has been no confirmed sighting of Lucan since a few hours after the Rivett murder on November 7, 1974.

Monday marks the 48th anniversary of the killing, with more books and TV documentaries expected to mark the half century anniversary of one of the world’s greatest crime mysteries in two years’ time.

Lucan was declared legally dead in 1999. In 2016, a death certificate was issued allowing his titles to be inherited by his son George. If still alive, Lord Lucan would be 87.

When the Met launched the review of the Lucan case in 2004, they used a computer to create an image of how he might look then.

Scotland Yard’s new inquiry – codenamed Operation Abberton – was part of a ‘cold case review’ of the killing which was expected to throw up significant new lines of inquiry.

Hundreds of pieces of evidence were removed from crates and reassessed by detectives and forensic experts.

Speaking in 2004, retired Detective Superintendent Alec Edwards, who was in charge of the Lucan files between 1990 and 1995, welcomed the reopening of the inquiry. 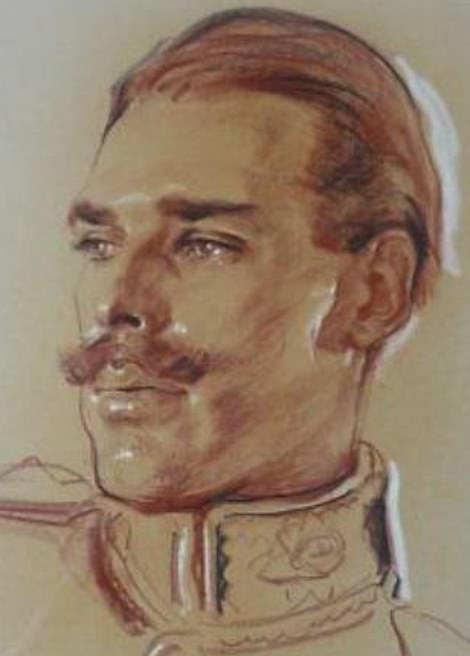 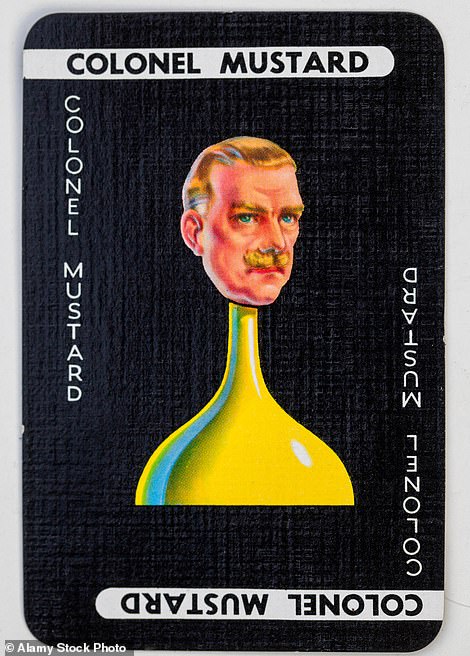 The Mail has also uncovered this never seen before 1953 portrait of Lucan in his Army uniform, left, in which the then 19-year-old bears a striking physical resemblance to Colonel Mustard, right 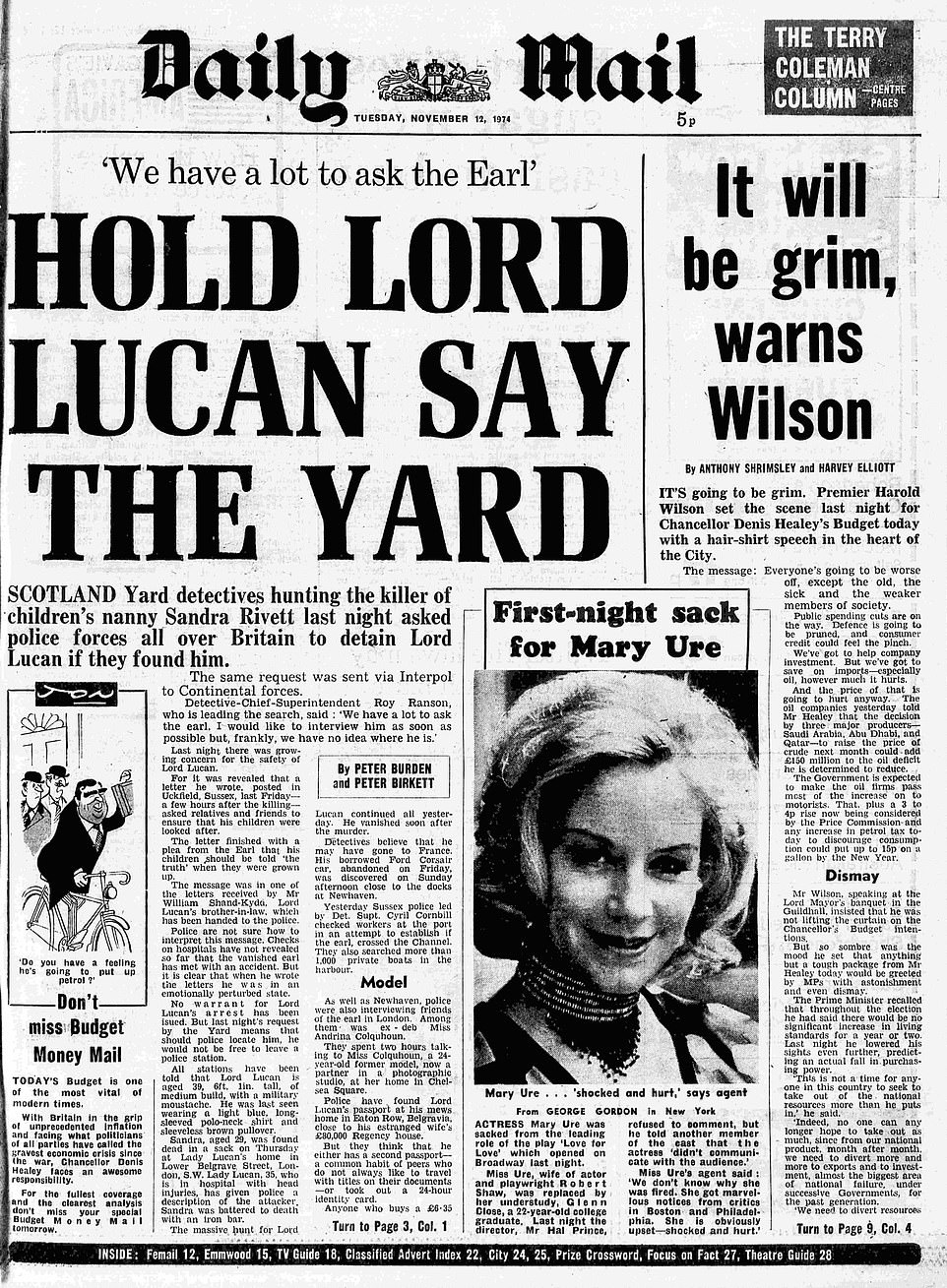 ‘I very much believe that Lucan is still alive,’ he said then. ‘I believe he was not the sort of man to take his own life. His actions after the incident were not consistent with someone planning to kill himself.’

Mr Edwards told the Mail at the time it was likely he had fled to Africa, where he had many contacts.

In 2003 the mystery of Lord Lucan took a twist with fanciful claims that he spent his last years as a hippy in India.

A former Yard detective said the peer sought refuge in Goa, where he was known as Jungly Barry until his death in 1996.

The idea was destroyed when the Mail revealed that Jungly Barry was in fact a former teacher from St Helens in Merseyside,, called Barry Halpin.

At the time, Lady Lucan – who died in 2017 – said it was unlikely her husband’s fate would ever be known.

Paracetamol 'alters your perception of risk and puts you in danger'