Callum Carlyle, 25, (pictured outside Edinburgh Sheriff Court today), has escaped being put on the Sex Offenders Register after exposing himself at a tourist attraction

A man who ‘accidentally’ exposed himself to a group of 15-year-old girls when he used optical illusion mirrors to make his penis look bigger has escaped being put on the sex offenders register.

Callum Carlyle, 25, was alone with his girlfriend in a room at the Camera Obscura and World of Illusions tourist attraction in Edinburgh and thought no one could see when he whipped out his penis.

The prankster, from Dumfries and Galloway in Scotland, was joking around with an optical illusion device which made objects look larger.

But he didn’t realise that images from the room were being beamed on to a screen in a nearby area where members of the public – including 15-year-old schoolgirls – were watching.

The indecent joke was then reported to police and landed the ’embarrassed’ mechanic in the dock at Edinburgh Sheriff Court today where he pleaded guilty to an amended charge of breach of the peace.

Fiscal depute Ross Carver told the court: ‘The accused was alone within the room when he unbuckled his belt, unzipped his trousers and removed his flaccid penis.

‘He then held his penis in his hand and walked to the other side of the room and he appeared to grow in size.

‘He then put his penis back inside his trousers.

‘His partner walked out of the room and witnesses heard her saying “I can’t take you anywhere”.’

‘He followed her out of the room. Unfortunately that illusion is projected on to a screen in an adjacent room where members of the public saw what the accused had been doing, including girls aged 15.

‘This matter was accordingly reported to the police.’ The Crown accepted there was ‘no significant sexual aspect’ to the conduct which took place on August 1 2020, the court heard. 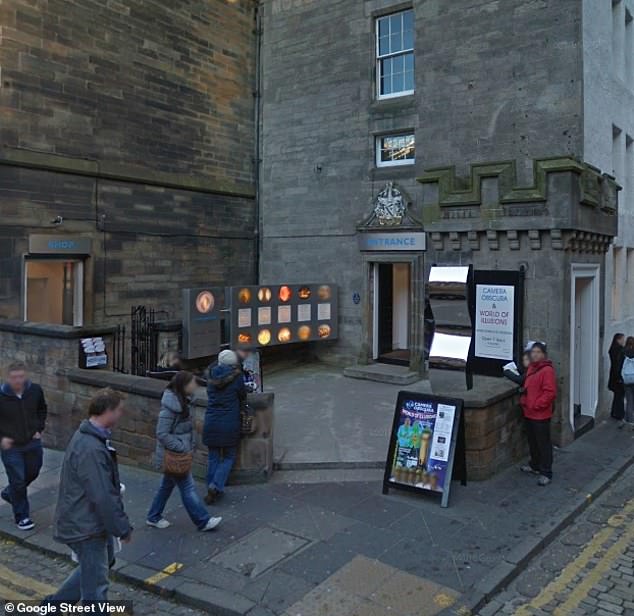 Solicitor Nigel Bruce, defending, said his client had believed the prank to be ‘a great laugh’ between him and his partner and was unaware others could view him at the time.

Mr Bruce said Mr Carlyle was ‘greatly embarrassed’ by his court appearance and that he ‘deeply regrets’ the incident which he described as ‘stupid horseplay’.

He said his client had spent two years worrying about the possibility of being added to the sex offenders register.

Sheriff Fiona Reith admonished the tradesman, adding: ‘This is an extremely unfortunate situation. It has caused great embarrassment to you.

‘You were not aware the camera relayed to another room.’