NHS chiefs and other health leaders today praised the Queen for her ‘unwavering support’ during her remarkable 70-year reign.

Amanda Pritchard, chief executive of the health service in England, led tributes to the monarch, saying the entire health service was ‘incredibly saddened’ by the 96-year-old’s death last night.

Queen Elizabeth II, who ascended the throne four years after the NHS was created, was hailed for ‘tirelessly’ championing the system, particularly through the Covid pandemic.

Her Majesty awarded NHS staff the George Cross at a ceremony in Windsor Castle in July this year, for their service over 74 years.

The health service was formed in 1949, just four years before the start of her reign, and she said staff had served the UK ‘courage, compassion and dedication’.

Doctors and nurses across Britain also paid tribute to her ‘long connection’ to Britain’s health community.

She was patron of the Royal College of Nursing, as well as charities including Cancer Research UK and the British Red Cross. 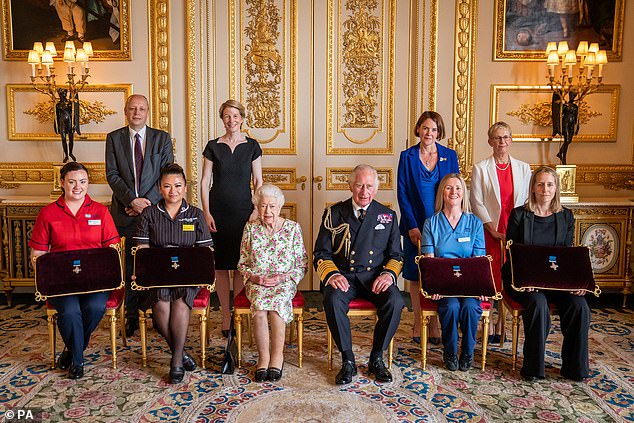 Amanda Pritchard, chief executive of the health service in England (pictured second from left, top row, after the NHS was the George Cross at a ceremony in Windsor Castle in July this year), said the entire health service was ‘incredibly saddened’ as she led tributes to the monarch 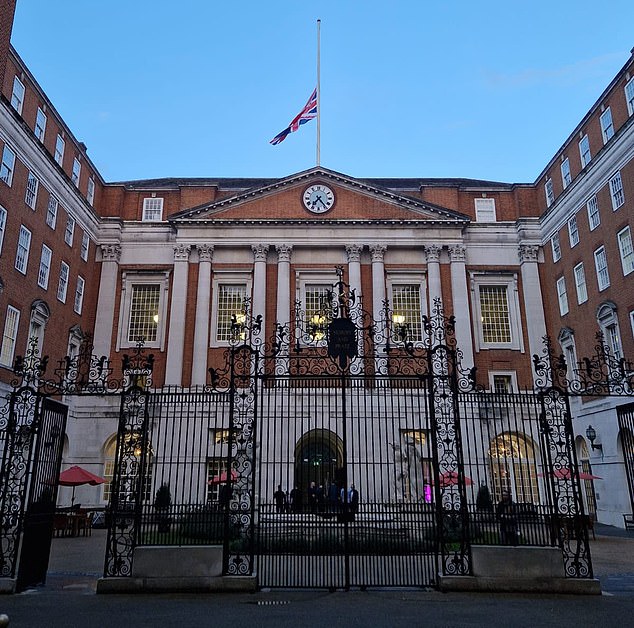 Medical unions also paid tribute to the Queen, with the British Medical Association commending her ‘stewardship of her nation’. Pictured: The BMA building’s flag at half mast

Buckingham Palace today announced a period of royal mourning will be observed from now until seven days after the Queen’s funeral as the slowing of everyday life in Britain begins to mark the extraordinary reign of Elizabeth II.

The new King confirmed his wish to hold an extended period of royal mourning, lasting a week until after his mother’s funeral, the full details of which have yet to be announced.

Black cloth or crepe bands will be worn on the left arms of all members, while civilian dress is expected to be dark with black ties for men and black dress for women. Black-edged notepaper will also be used in all Royal Households during this period

Meanwhile, flags at all royal residences will remain at half-mast until 8am on the morning after the period of royal mourning officially ends.

The period will be observed by all members of the royal family, household staff and representatives of the royal household on official duties. Troops committed to ceremonial duties are also expected to observe.

Charles and his wife remained at Balmoral overnight after racing up to Scotland to be at the bedside of the Queen, whose death was announced to the nation yesterday evening.

Amid the grief and confusion he will return to the capital today, before meeting Prime Minister Liz Truss and making a televised statement to the nation as monarch at 6pm.

Ms Pritchard said: ‘I know I speak on behalf of the whole NHS when I say how incredibly saddened we are by the news Her Majesty The Queen has passed away.

‘The Queen dedicated her life to public service and it was our proudest moment when she awarded NHS staff the George Cross earlier this year, for their compassion and courage over the last 74 years but particularly during the pandemic.’

Ms Pritchard added on Twitter: ‘We remember her decades of dedication and service, and unwavering support of the NHS.

‘On behalf of colleagues across the NHS, I send my heartfelt condolences to the royal family.’

She said: ‘I am joined by the whole of NHS Scotland in being incredibly sad to hear to hear the news of the death of Her Majesty The Queen.

‘A woman who tirelessly championed for our NHS.

‘To meet her only a matter of weeks ago will always be such an honour, I will hold dear to my heart.’

Matthew Taylor, chief executive of NHS Confederation, said: ‘Our deepest condolences go out to the Royal Family and to the nation following the passing of Her Majesty The Queen.

‘As our longest reigning monarch, The Queen has been a constant presence and source of stability for much of the population, including supporting the NHS for the majority of its 74 years.

‘As she did in life, The Queen’s death will leave a lasting impression on the country.’

Interim chief executive of NHS Providers, Saffron Cordery, added: ‘Trust leaders will be deeply saddened to hear the news that Her Majesty The Queen has passed away.’

The Queen was patron of University College Hospital, which she opened in October 2005, and the Royal London Hospital for Integrated Medicine.

One of her last public engagements before the pandemic was to open the Royal National ENT and Eastman Dental Hospitals in February 2020.

University College London Hospitals NHS Foundation Trust chief executive said: ‘I am deeply saddened to learn of the death of Her Majesty The Queen.

‘I know colleagues across UCLH will join me in offering our condolences to the Royal Family during this time of immense grief.

‘At UCLH, we were honoured to have welcomed The Queen to our Trust when she opened two of our hospitals – these were joyful occasions which will remain in the memories of our patients and staff who were present.

‘We were also privileged to have Her Majesty as patron of two of our hospitals.

‘The Queen, like so many people in the NHS, dedicated her life to service and I know staff across our hospitals will want to join me in paying their respects, as the nation enters a period of mourning.’ 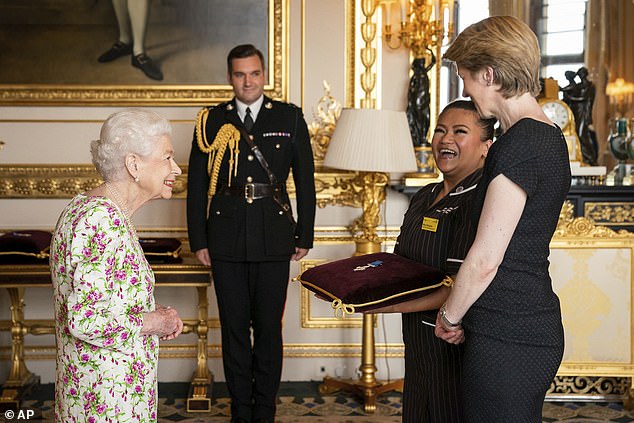 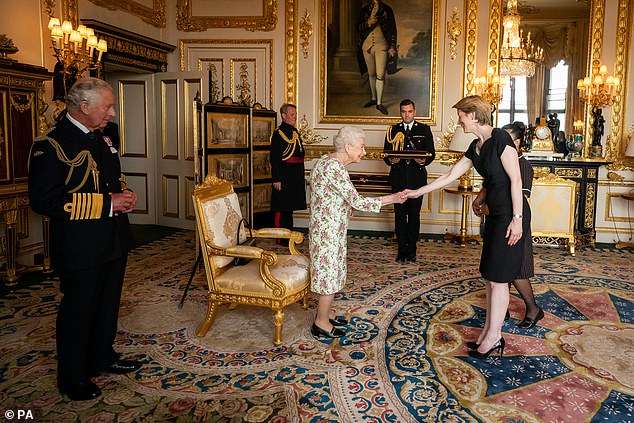 Ms Pritchard says: ‘I know I speak on behalf of the whole NHS when I say how incredibly saddened we are by the news Her Majesty The Queen has passed away’

She said: ‘Today, I mourn the death of Queen Elizabeth II RIP. Earlier this year the nation celebrated her Platinum Jubilee with much love and joy, recognising her decades of service.

‘My thoughts and prayers are with His Majesty King Charles III and all the Royal Family.’

Her predecessor in the Department of Health and Social Care Steve Barclay said: A life of the most remarkable service and duty.

A clergyman who spent last weekend with the Queen said Her Majesty was ‘full of fun’ and the ‘life and soul of things’.

The Rt Rev Dr Iain Greenshields, 68, Moderator of the General Assembly of the Church of Scotland, stayed with the Queen at Balmoral after performing a sermon at Braemar and Crathie Parish Church.

Greenshields had dinner on Saturday and lunch on Sunday with the 96-year-old, the Prince of Wales and the Princess Royal.

‘It was a fantastic visit. Her memory was absolutely amazing and she was really full of fun,’ he told The Times.

‘It came as a great shock to me when I heard she was gravely ill because she was in amazingly good form over the weekend.

‘She was the life and soul of things. She was speaking very personally to me about her time there way back when she was a child, she was talking about her horses from the past, naming them from 40 years ago, people’s names and places. She was quite remarkable.’

Greenshields yesterday paid tribute to the ‘faith, service and dedication of Her Majesty the Queen’, saying this had been ‘the hallmark of her long reign’.

‘On behalf of constituents across North East Cambridgeshire I know there will be the most profound sadness and sense of loss as we mourn an extraordinary monarch and send our deepest condolences to the Royal Family.’

Sajid Javid said: ‘After a lifetime of service, Her Majesty Queen Elizabeth II now rests. A lifetime of devotion and extraordinary service which will forever be remembered. May she rest in peace.’

Jeremy Hunt Tweeted: ‘In an age when [people] constantly question their well-being, the Queen stood for something different.

‘Not self-absorption but service to others. Knowing the path to happiness is through the happiness of others.

‘The best of our history and inspiration for our future. RIP Your Majesty.’

Medical unions also paid tribute to the Queen, with the British Medical Association commending her ‘stewardship of her nation’.

Professor Philip Banfield, BMA council chair said: ‘The BMA offers its deepest and most sincere condolences to the Royal Family on the death of Her Majesty the Queen.

‘Many will not have known life without Her Majesty as our Head of State and during her 70-year reign she was a dedicated public servant and much respected figure.

‘During her stewardship of her nation there has been substantial social and political change around the world. Her role in this will never be forgotten.’

Pat Cullen, chief executive and general secretary of the college, said: ‘We are deeply saddened by the death of Queen Elizabeth II.

‘She was a dedicated patron of the Royal College of Nursing with a long connection to the nursing community.

‘The Queen visited many nursing staff during her reign and will be fondly remembered by those who had the chance to meet and share their experiences with her.

‘Our thoughts are with Her Majesty’s family during this difficult time. She will be missed by nursing staff across the UK.’

The Royal College of Physicians (RCP) said the Queen had brought ‘joy’ to NHS staff fortunate enough to meet her.

College president, Sir Andrew Goddard, said: ‘This is a time of great sadness for the RCP and our members all over the world.

‘We have been honoured to have Her Majesty The Queen as our visitor for more than 70 years.

‘Many of our members’ work in hospitals the Queen visited during her long reign, some of which bear her name, and they will no doubt reflect on the interest she showed in their work, the support she gave to our NHS and the joy she brought to those colleagues and patients fortunate enough to meet her. 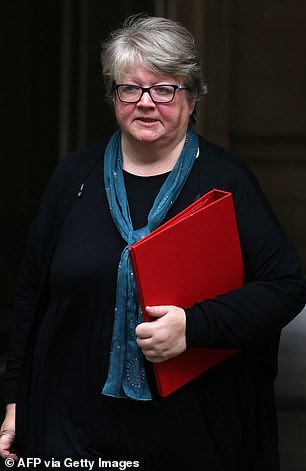 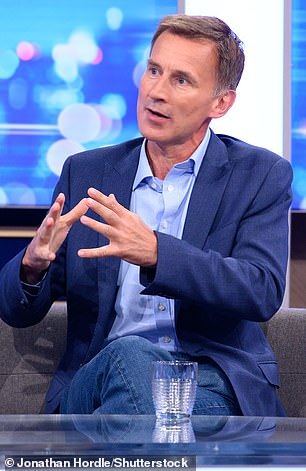 ‘She was much loved by many in the RCP and will be greatly missed.’

‘A number of colleagues at EMAS have had the privilege to meet Her Majesty for the exemplary work and commitment they have shown to the ambulance service, through being recognised on the New Year’s Honours List, specifically being awarded the Queen’s Ambulance Service Medal.

‘Colleagues and volunteers wear the crown on their uniform with pride, and we will stand together in sadness and remembrance for you, our Queen.’

‘For our staff, this is indeed a sad day and one that will make us all reflect on the extraordinary life that she has led.’

And health charities the Queen was patron of also paid tribute.

The British Red Cross said: ‘We are deeply saddened by the news that Her Majesty The Queen has died.

‘As our Patron for seventy years, Her Majesty showed enduring support for the work of the Red Cross here in the UK and around the world. Our deepest sympathies are with the Royal Family.’

Cancer Research UK said: ‘We’re saddened to hear about the death of Her Majesty the Queen.

‘As our Patron, she kindly supported us over the years, opening our laboratories and institutes which are an integral part of the charity’s pioneering work into the prevention, diagnosis and treatment of cancer.’

Boosie Badazz Laughs Off Death Threats From LGBTQ+ Community, Details How They Want to Kill Him