Edinburgh: Unprecedented numbers of mourners are expected to pay their respects to the late Queen Elizabeth as British authorities forecast queues could extend for up to eight kilometres in central London.

More than three quarters of a million people will try to visit Westminster for the lying-in-state from Wednesday evening, with those attending waiting more than 12 hours and potentially up to a day.

Authorities believe the event will dwarf the 320,000 people who passed by Winston Churchill’s coffin over the course of his lying-in-state in 1965 and the 200,000 who saw the Queen Mother in 2002.

The number of people on the streets for the funeral is also expected to rival the estimated 1 million who came out for the funeral of Diana, Princess of Wales. The British government said it was preparing for the “very real possibility” that London will become “full” for the first time, with contingency plans in place for public transport operators not to attempt to travel to the capital.

In a bid to accommodate Britons and thousands of tourists who have flown to London, the public will be able to file past the coffin in Westminster Hall 24 hours a day until the morning of the funeral next Monday.

Queen Elizabeth II’s closed coffin will rest on a raised platform, called a catafalque, and will be draped in the Royal Standard with the Orb and Sceptre placed on top. Each corner of the platform will be guarded around the clock by a vigil of units from the Sovereign’s Bodyguard, the Household Division, or Yeoman Warders of the Tower of London.

Edward VII set the modern tradition when he lay in state in Westminster Hall in 1910, as did King George V in 1936 and King George VI – the Queen’s father and the last sovereign to die – in 1952.

The first person arrived to queue at midday on Monday – more than 48 hours before the line opens – with barriers being set up and security staff preparing for at least 750,000 people to wait to pay their respects to the late monarch. Officials, however, have acknowledged that it could be significantly more.

In guidance issued on Monday evening for those planning to go to parliament: “You will need to stand for many hours, possibly overnight… as the queue will keep moving.” People should bring their own food and drink as there will be only “limited refreshments”.

The advice adds that people should “respect the dignity of the event and behave appropriately”, remaining silent once inside parliament. People must “dress appropriately” and must not wear clothes with offensive or political slogans. Banned items include “placards, flags and advertising or marketing messages”.

Authorities have told potential mourners who arrive at parliament, that they will go through airport-style security. Flowers cannot be taken into the Palace of Westminster and cameras and mobile telephones cannot be used inside. Only small bags will be allowed and no food or liquid “of any kind”. 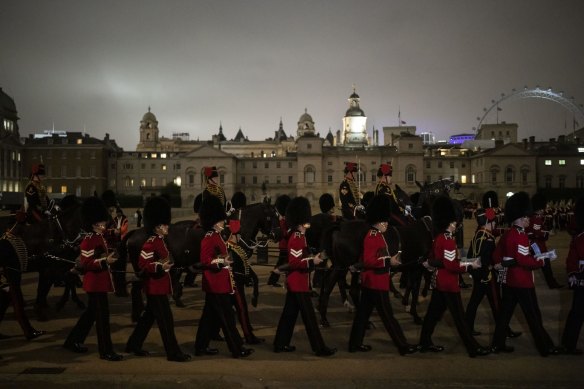 Vanessa Nathakumaran, 56, from Harrow appeared south of Lambeth Bridge on Monday where the entrance to the queue is expected to be established. Nathakumaran, who grew up in Sri Lanka before moving to the UK to study in the 1980s, said she had admired the royal family since she was 10. Her daughters will bring her food while she is in line.

“I’m not actually thinking about the waiting time, but my main aim is to pay respect and I want to be part of it,” she told ITV News.

“She did a good service to Britain and the Commonwealth … and it is our duty to say thank you for her service.”

There are estimates that 10,000 police officers could be on duty every day in London each day leading up to the Queen’s funeral as part of the biggest security operation the country has ever seen.
Up to 1500 armed service personnel will be available to control the crowds, with personnel from all three services. They will assist thousands of stewards who will line the route. The queue will be closed if there are too many people.

Tens of thousands of mourners in Edinburgh were expected to view the Queen’s casket at St Giles’s Cathedral, which began on Monday afternoon local time and will continue through the night until 3pm on Tuesday before her body is flown to London.

Tributes to ‘dancing angel’, 12, after body of schoolgirl pulled from river – The Sun

Food hall out, heritage in: David Jones’ grand plan to lure shoppers back to city

The tragic death of Dog the Bounty Hunter’s daughter