MPs today hit out at the Church of England for not allowing same-sex couples to marry in its churches.

The Church was accused of ‘cruelty’, ‘hypocrisy’, ‘discrimination’ and of treating gay people as ‘second-class citizens’ during exchanges in the House of Commons.

It was also questioned how ‘meaningful’ a recent apology by the Church to LGBTQI+ people would be, if it maintained its stance on same-sex marriage.

The issue was raised in an urgent question in the Commons this afternoon after the Church last week said it would bless same-sex civil marriages for the first time.

The Bishops of the Church of England have also written an letter formally apologising for the ‘shameful’ times LGBTQI+ people have been ‘rejected or excluded’.

But there has been anger at the Church’s refusal to change its position on gay marriage, with same-sex couples still unable to marry in its churches.

Justin Welby, the Archbishop of Canterbury, tonight defended the Church’s decision to allow the blessing of same-sex partnerships as a ‘huge step’.

He admitted the Church was ‘deeply divided’ on the issue and revealed he had received ‘flak’ from opponents of the ‘controversial’ decision to allow blessings. 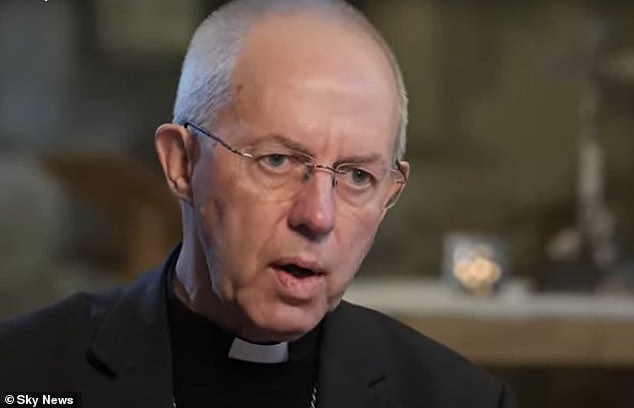 Justin Welby, the Archbishop of Canterbury, defended the Church’s decision to allow the blessing of same-sex partnerships as a ‘huge step’ 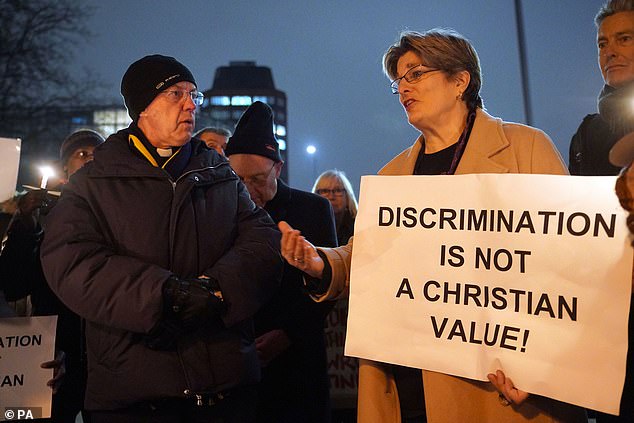 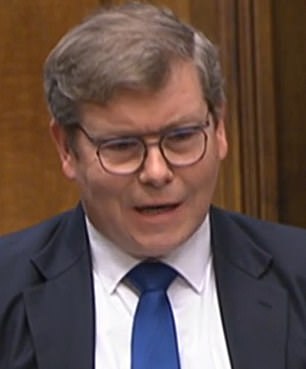 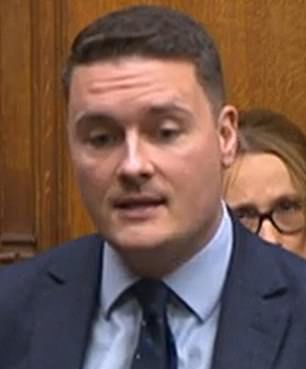 Tory MP Peter Gibson hit out at a ‘two-tier system which labels gay people as second-class citizens’, while Labour’s Wes Streeting said it was a ‘tragedy’ that many gay Anglicans choose not to go to church

In the Commons this afternoon, Labour former minister Ben Bradshaw asked how ‘sustainable’ it would be when ‘gay Anglicans in Scotland, and soon in Wales, may marry in church but our constituents in England may not?’.

Fellow Labour backbencher Sir Chris Bryant, a former Anglican priest who has previously spoken of leaving the Church over its stance on homosexuality, told MPs: ‘I think there’s still a cruelty in what the bishops have brought forward.

‘There’s a sort of hypocrisy. I know they’re trying to square everything off. But in the end there’s a hypocrisy that will bless the individuals and not the relationship.’

Wes Streeting, Labour’s shadow health secretary but who spoke from the Commons backbenches today, said: ‘I made the choice that I think many young gay Anglicans did of choosing to be myself and choosing not to go to church. And that is such a tragedy for so many.’

Tory MP Peter Gibson welcomed the ‘movement towards blessings’ but added: ‘Is it not time that the Church of England celebrated every relationship and ended this two-tier system which labels gay people as second-class citizens?’

‘But all the more welcome for that, because there are other fish that have to be fried,’ he added.

DUP MP Jim Shannon said the Church’s approach to marriage was ‘entirely for them and not for the legislators in this place’.

Andrew Selous, who represents the Church in the Commons as the Second Church Estates Commissioner, suggested the Church had ‘almost managed to upset absolutely everyone’.

‘These proposals clearly do not go far enough for some,’ he said. ‘And actually I would just ask the House to understand there are some who are deeply grieving and troubled because they believe they’ve gone too far.’

In an interview with Sky News tonight, the Archbishop of Canterbury said the decision to allow the blessing of same-sex partnerships had been ‘controversial’.

He also confirmed he will not personally carry blessings out due to his ‘pastoral responsibility for the whole communion’.

‘First, we have made a huge step, which is to say that if someone is married in a civil marriage, equal marriage, someone of their own gender, same sex marriage, that they can come to church and have that marriage recognised and thanked for and dedicate themselves to God and seek God’s blessing in their lives,’ he said.

‘And that’s something that we’ve never done before and it’s controversial. I’m getting equal amount of flak from the other side about having compromised traditional Christian standards.’

The Archbishop last night spoke to protesters who had gathered outside his official London residence of Lambeth Palace asking for same-sex couples to be allowed to marry in church.

What time is the EuroMillions draw tonight, August 26, 2022 and how much is the jackpot? – The Sun | The Sun