Each week during the 2022-23 NBA season, we will take a deeper dive into some of the league’s biggest storylines in an attempt to determine whether the trends are based more in fact or fiction moving forward.

The MVP case for two-time winner Nikola Jokic on the sixth-seeded Denver Nuggets last season centered around the unassailable advanced statistics that made his raw numbers even more impressive and carried his team to 48 victories in the Western Conference, despite the injury absences of his two best teammates.

This was enough for Jokic to overcome incredible seasons from Philadelphia 76ers center Joel Embiid and Milwaukee Bucks forward Giannis Antetokounmpo for a second straight year. It also led voters to concede that it would take an even more undeniable campaign for Jokic to join Larry Bird, Wilt Chamberlain and Bill Russell as a three-peat MVP, and a more crowded field of of worthy candidates early this season will make it even easier for the media panel to excuse the Nuggets star's case purely out of want for something new.

Nobody can agree on a single definition of an MVP, but we do know it shouldn't work like that. Jokic should be in the MVP conversation again, so long as all 100 voters consistently apply their criteria across seasons.

The Nuggets are 17-10, one loss out of first place in the West and on a 52-win pace — better than they finished last season. Jamal Murray and Michael Porter Jr. have returned to the starting lineup, and the on/off efficiency differential used to support Jokic's case last season is even more supportive of his value.

The Nuggets perform like a middling defense when Jokic is on the floor and a bottom-three defense when he's not. Denver is 28.1 points better per 100 meaningful possessions with Jokic in the game, which would mark the highest figure recorded by any regular since Cleaning the Glass began tracking the data in 2003-04 (and nearly 10 points per 100 possessions better than Jokic's NBA-best on/off differential last season).

This is enough to negate any debate over the value of other MVP candidates to their teams, as it was last year, and a greater differential despite superior teammates to carry the load when he rests is an even more convincing argument in favor of Jokic. He makes everyone better, and when he sits, the bottom falls out. 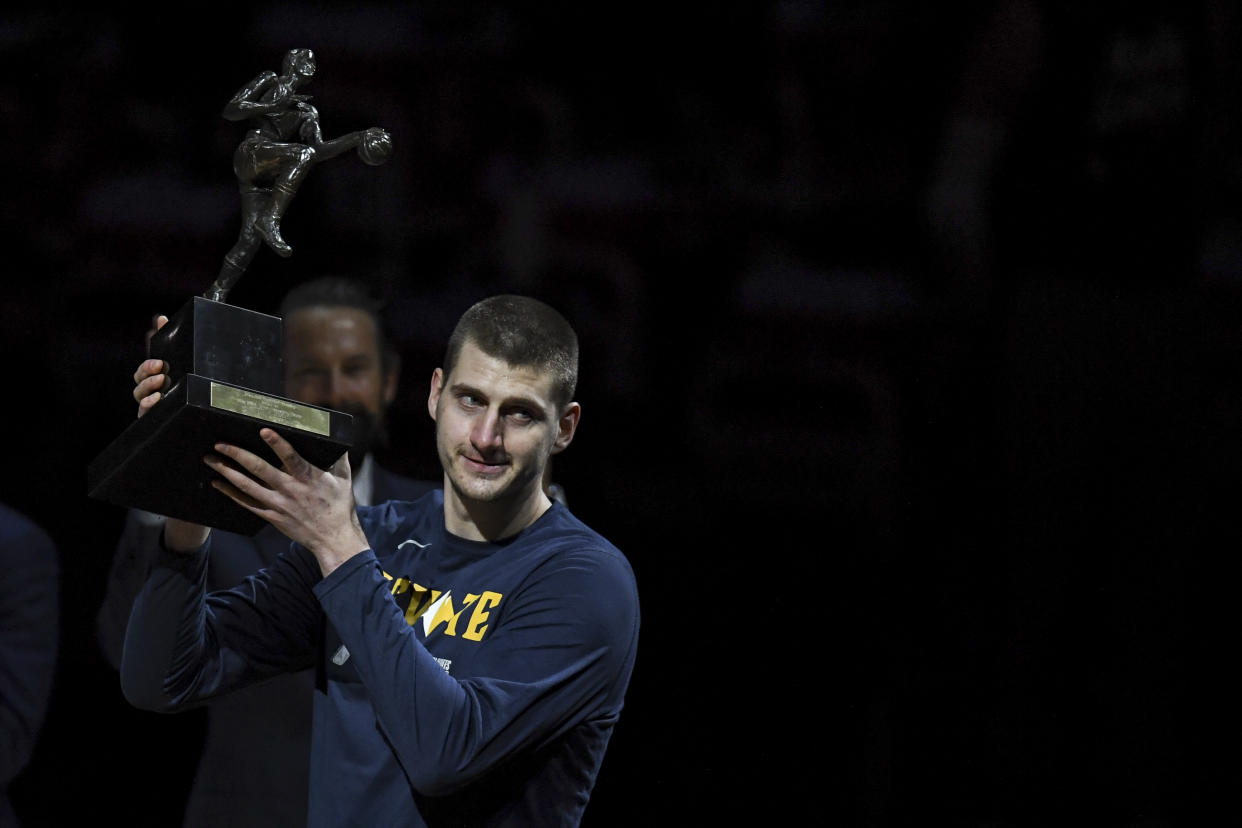 We shouldn't make an MVP argument based solely on how well or poorly a player's team performs with or without him. Tatum's case shouldn't suffer simply because his teammates are capable without him. They might be more capable because of him, but there is no metric for how players respond to his leadership.

Voting for the best player on the best team (Tatum) feels like a relic of past arguments, before we had so much statistical input, and the same goes for defaulting to the accepted best player alive (Antetokounmpo).

So, what does all that fancy statistical input say?

Let's run through 10 all-encompassing advanced statistics and where our leaders rank league-wide:

Their average finish in those categories:

Throw out every player's outlying finish in those categories, and the ranks are even more stark:

There isn't much argument against the advanced statistical case for Jokic this season, just as there wasn't last season, and nobody has a more drastic impact on his team. We're getting closer to describing an MVP.

Even a traditional statistical argument against Jokic doesn't hold water. His 2.5 fewer points per game correspond to a steeper decline in shot attempts and a rise in assists, which makes sense, since Denver returned 28.2 shots a night from Murray and Porter. In theory, Jokic's scoring should have fallen further. In practice, he is still getting his points by being historically efficient. His true-shooting percentage of 70.1% is second only to Boston Celtics forward Grant Williams, who attempts nine fewer shots per game. Nobody has ever logged a true-shooting percentage above 70% on more than 10 field-goal attempts per game.

If panelists can't build a statistical case against Jokic, is the true test of an MVP a vibe check? It was harder for Jokic to be this great last season, so he deserved it more? Then, we're back to giving the award to the candidate with the least productive teammates, right? Hand Doncic the award right now, if that is the case.

Except, that seems like we're drifting further from a proper rationale for MVP.

Jokic's greatness is built on lifting the collective around him, and he is doing that to a greater degree this season. With Jokic on the floor, Denver is outscoring opponents by 3.2 more points per 100 possessions than it did last season, and without him, the team is now losing by 5.3 more points per 100 possessions. He has better teammates, and he is making them better, only they are somehow even worse without him.

In other words, this season provides more proof that the panel was right to reward Jokic's value to a sixth-place team, and the supporting argument is no less applicable to his value to a third-place team. Shiny new candidates can serve as a distraction, but voters shouldn't adjust their criteria to fit a fresh narrative. If they are being honest with themselves, Jokic isn't just an MVP candidate again, he might be the favorite.

I cut my mum out of my life two years ago – I've blocked her number but am I depriving my daughter of a grandma?