Leading economists say the state and federal governments will continue to resist calls for cash assistance to businesses and workers hit by the Omicron crisis.

Evidence is mounting that the latest wave of the COVID-19 virus is slowing the nation’s economic recovery, with cities forced into “shadow lockdowns” as workers isolate and customers, fearing contracting the Omicron strain, stay away from businesses. 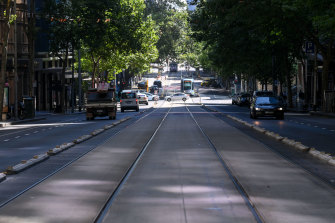 Melbourne’s CBD is almost deserted as shoppers and workers stay at home.Credit:Eddie Jim

But several economists told The Age on Monday that a fresh rescue package from either the state or federal governments was unlikely in the short term, with politicians hoping the worst of the crisis will pass within weeks.

There is also growing expectations that within weeks the Reserve Bank of Australia will end one of its major COVID responses – the quantitative easing program that saw the bank buy more than $270 billion in state and federal government debt, helping to finance the huge growth in spending throughout the crisis.

Victoria followed NSW at the weekend in extending its commercial tenancy protections for small businesses struggling through the pandemic while the federal government has retained its “cash back” provisions for smaller enterprises and its business loan scheme.

But Treasurer Josh Frydenberg confirmed on Monday that a return to the support settings seen at the height of last year’s lockdown in Sydney and Melbourne was off the table for now, while the Victorian government has given no indication that it is considering a return of cash payments to businesses.

Independent economist Saul Eslake told The Age on Monday that the state and Commonwealth government were probably making the right call, for now.

“If … the Omicron wave is close to peaking, then those calls [for more government intervention] will probably recede,” he said.

“But if they continue to run, and significant proportions of businesses are adversely affected, then I suspect they might have to [intervene].”

Mr Eslake said the federal government may feel political pressure to act if the Omicron wave continued to cause significant economic disruption as the federal election drew closer.

“I don’t think there’s any great appetite for them to do anything,” Mr Eslake said. “But there’s an election due before the end of May so if, if things were to take a serious nosedive, which is not my forecast, then this close to an election, I suspect the feds would open the purse strings if they thought that was necessary to shore up their vote.”

SGS Economics senior economist Marcia Keegan said that any further business assistance payments which have been largely the preserve of the states, would probably be narrowly targeted rather than broad-based.

“It … depends on how long the official restrictions last, particularly on things like nightclubs, in venues and dance venues.

“If you’re talking about a couple of weeks, it’s probably not worth going to all that effort. But as we come out of January if we’re not seeing the curve flattening off, and we’ve still got restrictions in place, and there’s no chance of them getting removed, then [government assistance] might be something that we should be looking at.”

ANZ bank’s head of Australian economics David Plank said he and his colleagues believed February would be the month when the Reserve Bank decides the economy has recovered enough to allow it to turn off the tap of money that had been flowing to Australian governments through the quantitative easing program.

“The economy’s in better shape than [the RBA] thought it would be, and that’s true even with Omicron,” Mr Plank said.

“We had more than 300,000 jobs created in November, unemployment is less than 3 per cent, and it’s almost certainly going to be the case that inflation is higher than the RBA thought it would be.

“Yes, Omicron is a risk, but the experience of the RBA is that the impact of these things fade pretty quickly.”

My tumour was in a really awkward place but they managed to save my bottom, says brave Adele Roberts amid cancer battle

Timothy West: I’m the grumpy one, not my wife who has Alzheimer’s