Village becomes the first in Britain to run DRY: Residents forced to rely on deliveries of bottled and tanker water as half the UK now faces hosepipe ban

Residents in an Oxfordshire village have been forced to rely on deliveries of bottled and tanker water – as half of the UK population could be facing a hosepipe ban within weeks.

Northend, on the Buckinghamshire border, usually gets its water from the now dried-up Stokenchurch Reservoir – which has been effected by the scorching heatwave temperatures – with little rain expected to help relieve the threat of drought, which has prompted water bans and fire warnings.

Thames Water had to send water tankers and bottles to its residents, struggling after high demand on the natural resource in recent hot weeks.

The company has also recently announced it will be issuing a hosepipe ban for 15million customers across London, Surrey and Gloucestershire in the coming weeks.

Last night Andrew Sells, head of Natural England between 2014 and 2019, accused water companies of selling off reservoirs which could have helped ease drought to housing developers.

‘Several of our water companies preferred to build houses on some of their reservoirs, and last week we learned that together they have built precisely zero new reservoirs in the past 30 years’, he wrote in the Daily Telegraph.

‘No doubt some reservoirs had reached the end of their working lives, but in abandoning this infrastructure, without any replacements, they have again put short-term profits ahead of long-term supply.’

The companies which have sold off decommissioned reservoirs in recent years include Thames Water, Severn Trent and Southern Water.

It comes as millions of Britons could be facing a hosepipe ban after a leaked document revealed three more water companies are planning restrictions. 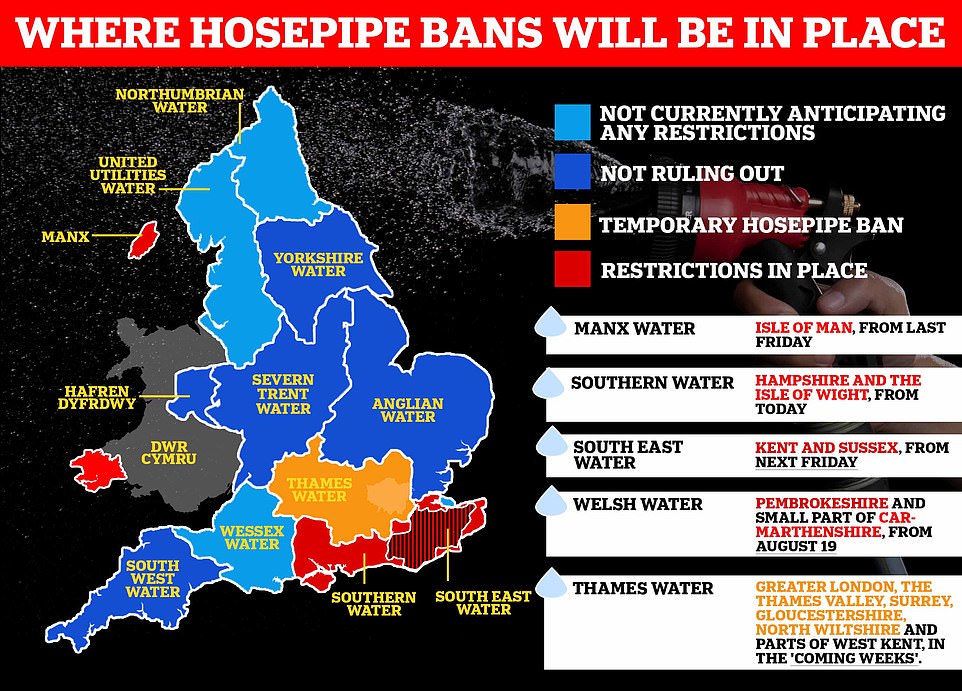 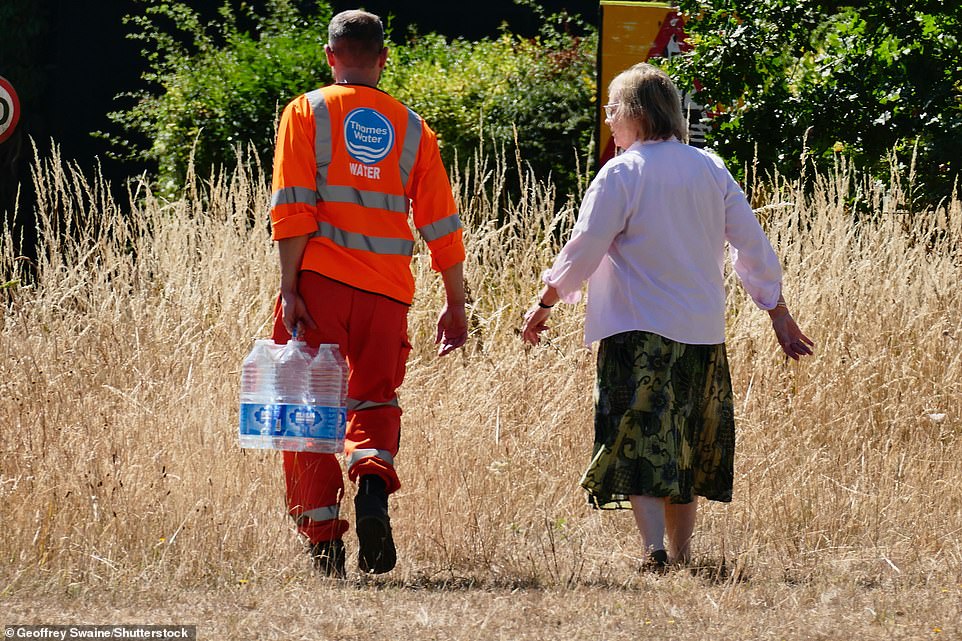 Pictured: Thames Water workers deliver bottled water the residents of the sleepy, picturesque village of Northend after it ran out of water on Tuesday 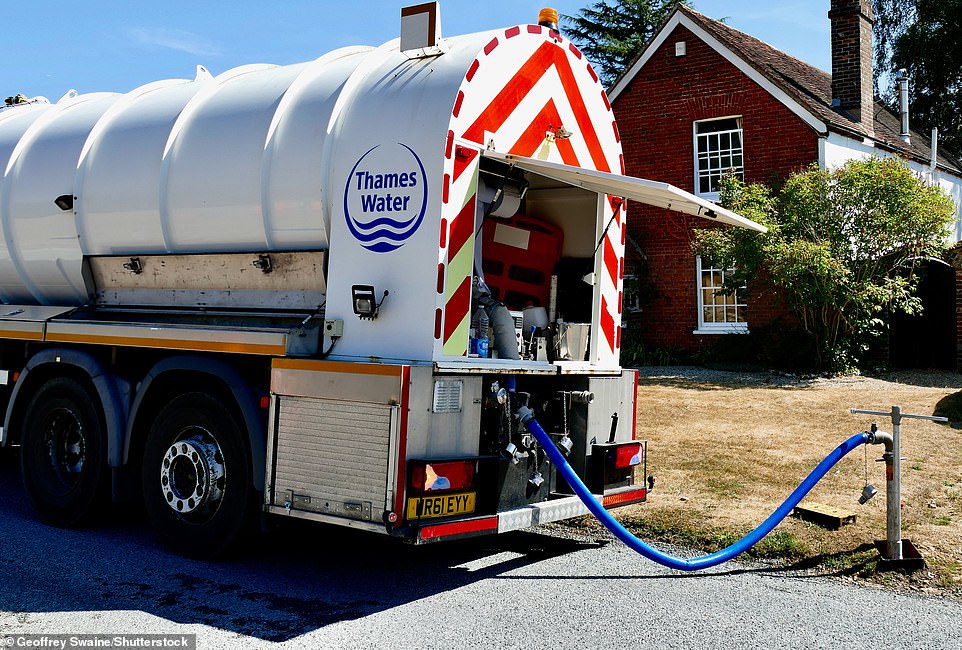 Pictured: A Thames Water tanker filled up the water supplies in the Oxfordshire village of Northend on Tuesday afternoon 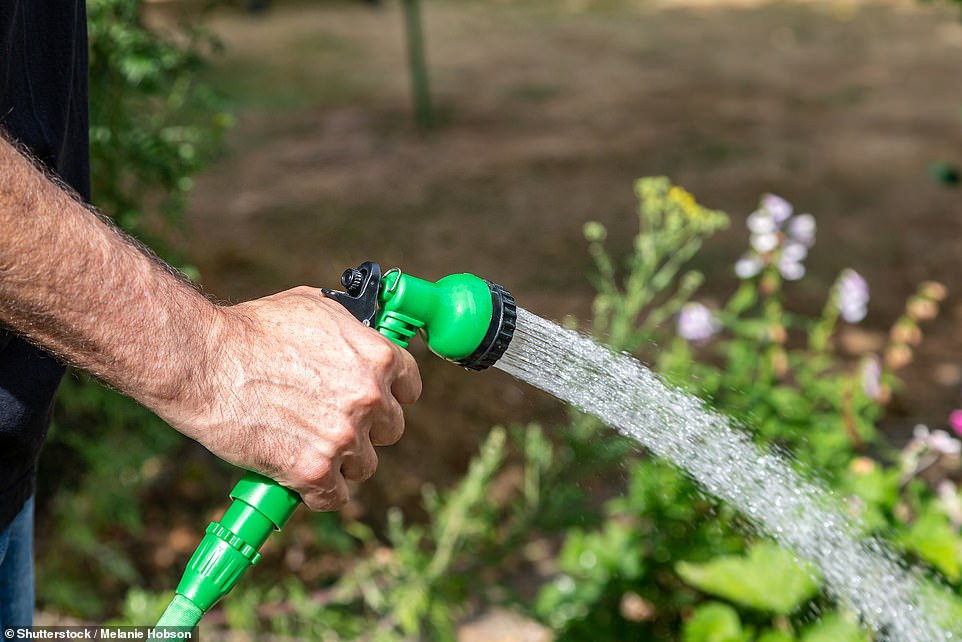 Where have hosepipe bans been introduced?

What are the rules?

Once the ban is in force you will not be allowed to use a hosepipe or sprinkler to water your garden, clean your car or boat, fill up a swimming or paddling pool or an ornamental pond. Pressure washing a patio is also banned. But the use of watering cans is allowed.

Those with disabilities – who have a blue badge – are exempt for watering their garden. So are those watering an area for a national or international sports event.

Commercial car washes and professional window cleaners are not affected by the ban.

What happens if I break the ban?

You could be prosecuted and subject to a fine of up to £1,000 in the courts if found guilty.

Yesterday Britain’s biggest water company, Thames Water, which supplies some 15million people, said it would announce a ban in the coming weeks.

And an internal Environment Agency document seen by the Daily Mail reveals that the water companies discussing whether to bring in a ban are Yorkshire, with five million customers, Severn Trent with eight million and South West with up to two million. If enacted, it would bring the number of people under a hosepipe ban to around 33million.

Meanwhile, Tory leadership frontrunner Liz Truss has weighed on hosepipe bans after two water companies announced others warned they may need to follow suit, following the driest eight months from November to June since 1976 as well as the driest July on record for parts of southern and eastern England.

Ms Truss said: ‘My view is that we should be tougher on the water companies and that there hasn’t been enough action to deal with these leaky pipes which have been there for years.

‘I have a lot of issues with my water company in Norfolk, which is a particularly dry area of the country, and those companies need to be held to account.’

She told the Daily Express hosepipe bans ‘should be a last resort’, adding: ‘What I’m worried about is it seems to be a first resort rather than the water companies dealing with the leaks.’

Scientists warn that the likelihood of droughts occurring is becoming higher due to climate change, driven by greenhouse gas emissions from burning fossil fuels and other human activities.

Climate change is also making heatwaves more intense, frequent and likely – with last month’s record temperatures made at least 10 times more likely because of global warming, and ‘virtually impossible’ without it, research shows.

Government minister Paul Scully said it is ‘always sensible’ for people to conserve water, when asked about the possibility of a hosepipe ban for London.

He added: ‘But we’ll look carefully because the whole point about London and the South East is that the more development you have and the less rainfall there is, then obviously there’s less to go around and we’ve got to be careful.’

It came as tinderbox Britain is facing ‘lethally hot’ temperatures today with the mercury set to reach 93F today in southern parts of England.

Families enjoying their summer holidays will enjoy tropical temperatures from today as London is expected to reach 86F (30C) ahead of the Met Office’s amber warning for parts of England and Wales, which comes into force from Thursday.

Britain has been told to brace for a sweltering heatwave this week as a Level 3 Heat Health Alert also came into effect yesterday and has been extended until 11pm on Sunday – with little rain expected to help relieve the threat of drought which has prompted hosepipe bans and fire warnings.

The UK Health Security Agency have advised people to look out for those who are older or with existing health conditions, as well as young children.

The Met Office said temperatures are likely to rise into the low to mid-30s in central and southern parts of the UK later by Thursday – but will not be as extreme as the record-breaking heat in July when the thermometer climbed above 40C.

Meanwhile, there have been dire warnings that drought conditions could last three months. The UK Centre for Ecology and Hydrology predicts ‘exceptionally low’ flow levels in rivers until October. 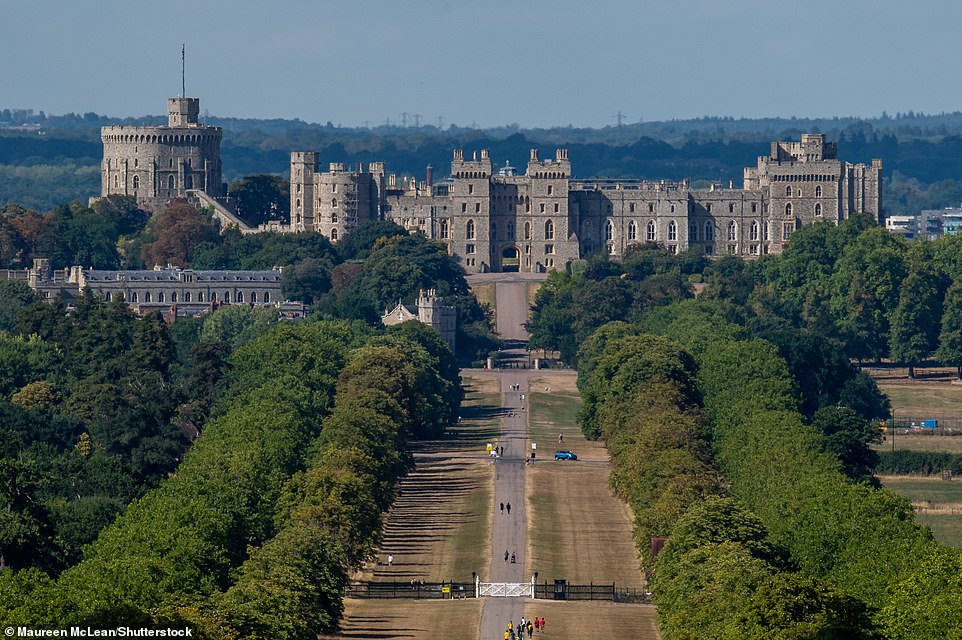 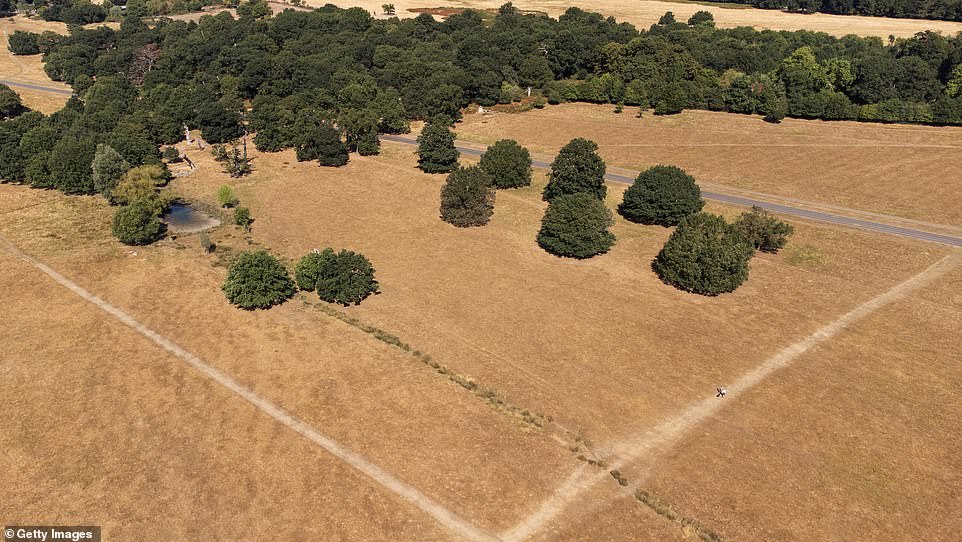 In this aerial photograph, a man walks along a sun-bleached pathway in Richmond Park on August 09 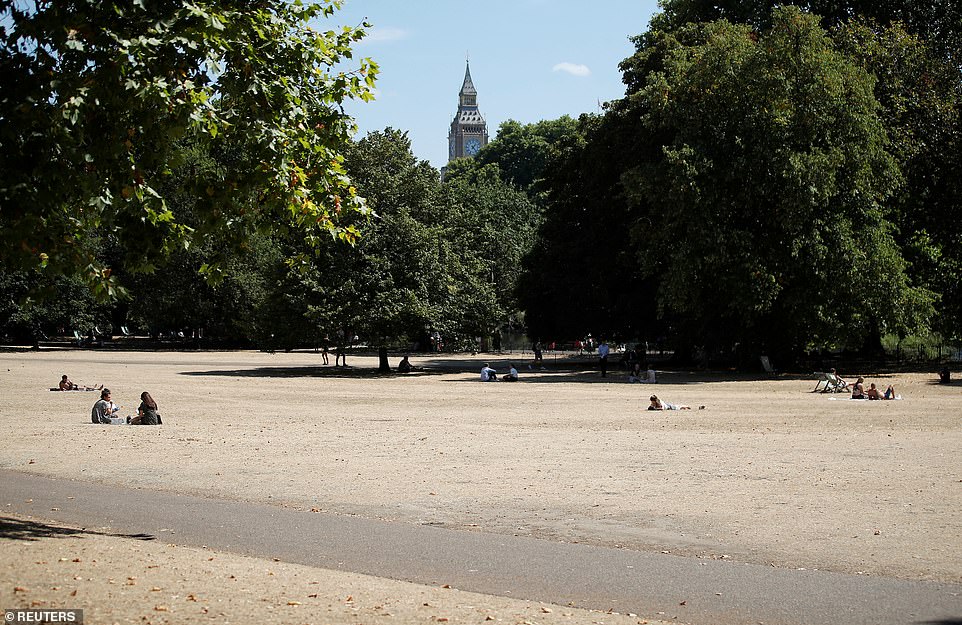 People sit in the sun, surrounded by parched grass during a period of hot and dry weather, in London, on August 9 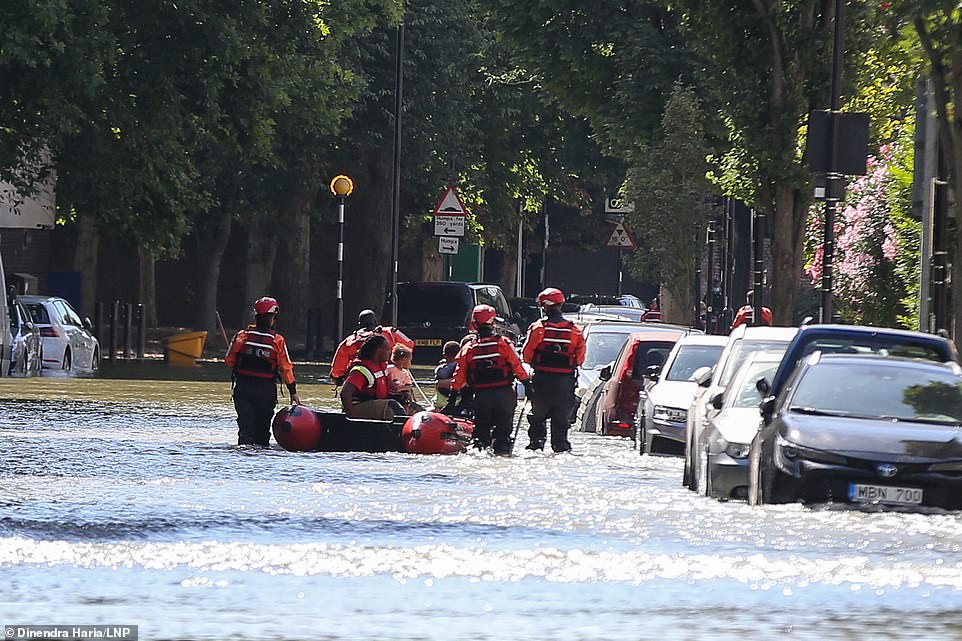 The scene at Hornsey Road in Islington, north London where firefighters were dealing with a burst water main that caused flooding of about 4 feet as Thames Water urged customers to save water 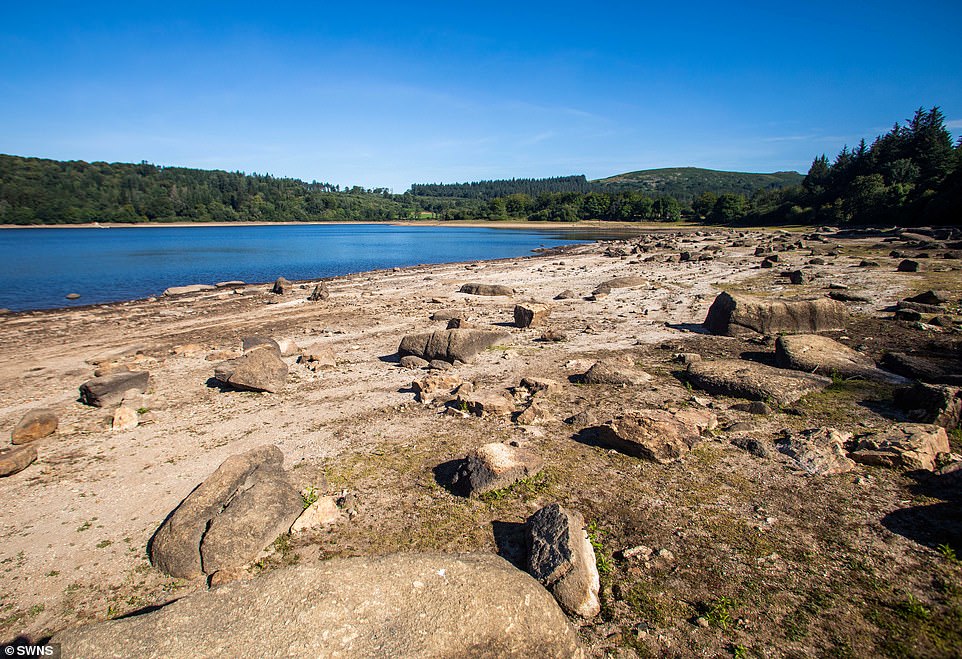 The Burrator Reservoir in Devon, which as of August 6 (pictured) was 44 per cent full. It comes amid fears of a drought in England 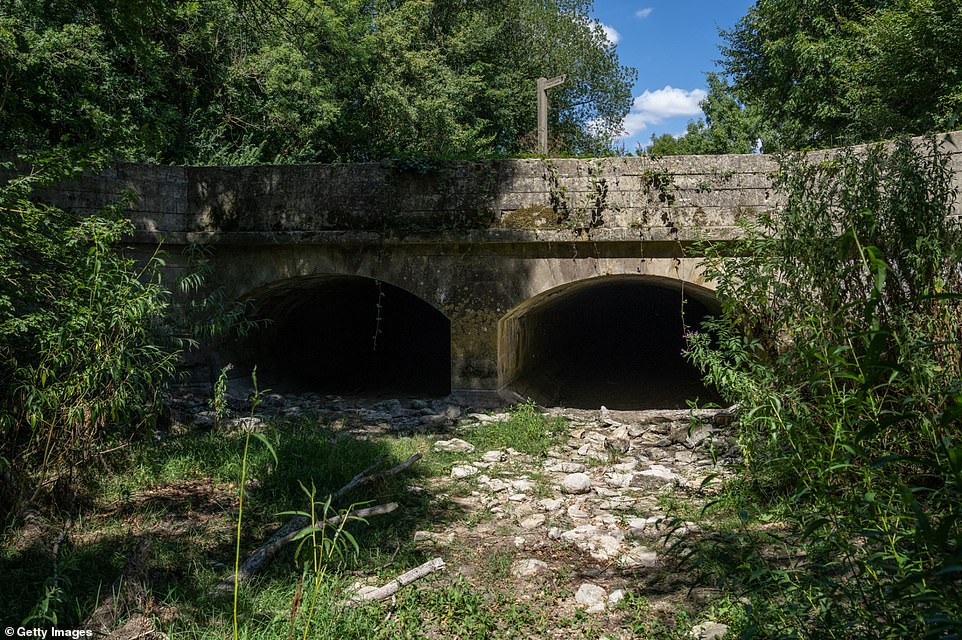 A bridge crosses the dried bed of the River Thames near the river’s source at Thames Head, a group of springs that arise from the limestone aquifers of the Cotswolds, on August 8

Thames Water covers parts of London, Surrey, Berkshire, Oxfordshire, Wiltshire and Kent. Its hosepipe ban comes despite the fact it lets 635million litres of water a day leak from its pipes.

Further pressure for water companies to act could come this week when the Environment Agency is expected to declare that England is in a state of drought.

The bans make it an offence to use a hosepipe to water a garden, wash a car or boat or fill up ponds, and can attract a £1,000 fine in the courts.

Meanwhile, nearly 50 firefighters have been battling a huge ‘tinderbox’ blaze to stop it spreading to the Queen’s Sandringham estate in Norfolk.

The royal estate, with the Queen’s residence at its centre, sits in 8,000 hectares (nearly 20,000 acres) of woods and heaths which, like much of the rest of Britain, have become parched in the heatwave.

The drama began when at least five fire engines and a water carrier were called shortly before 8am yesterday to the blaze in forest land just off the A149 near Sandringham.

It’s believed Sandringham has its own fire engine in case of a blaze on the royal estate.

And drivers are being urged to check their tyres before beginning journeys on ‘searing Saturday’. 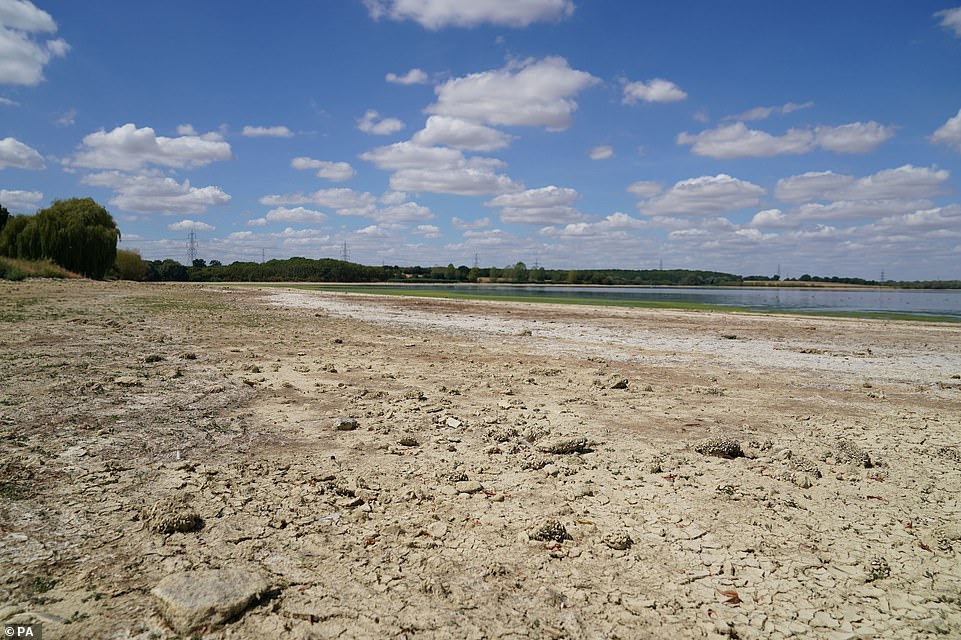 Dry earth on the banks of Grafham Water near Huntingdon in Cambridgeshire, where water is receding during the drought

The AA warned the start of a weekend when millions of people will be making long trips to the seaside, football matches, music festivals and holidays will coincide with extreme heat.

Professor Hannah Cloke, Professor of Hydrology at the University of Reading, said: ‘The warnings for extreme heat from both the Met Office and the heat health alert issued by the UK Health Security Agency are another reminder that this summer in the UK is proving to be lethally hot.

‘Compared to the July record-breaking heat, this event will be less intense but last longer, which could actually have a greater impact on people’s health.

‘This heatwave might not break any records for maximum temperatures, but it might actually cause more deaths.’

The hot weather led to tragedy on Monday as a 14-year-old boy has died after getting into difficulty in a lake in Cheshunt, Hertfordshire.

Emergency services were called to the scene at North Met Lake, off Cadmore Lane, just after 5pm on Monday after reports that a teenager had not re-surfaced after being in the water.

They carried out searches of the area but a body was recovered just before 11pm.