‘I had God as my co-pilot’: Hero pilot who crash-landed medical helicopter in front of Philadelphia church while transporting sick baby speaks out after being released from hospital: All four people on board survived

The pilot of a medical helicopter that crash-landed outside a Philadelphia church last week with four people on board, including a sick baby, brushed aside claims that he was a hero, instead crediting a higher power with everyone’s miraculous survival.

‘I had God as my co-pilot that day, and we took care of the crew and we landed in His front yard, so that was kind of nice,’ Daniel Moore told a crowd of well-wishers as he left Penn Presbyterian Medical Center in Philadelphia on a stretcher to be transported home on Sunday.

Moore had been at the hospital since last Tuesday, when the helicopter he was flying crashed outside Drexel Hill United Methodist Church in Delaware County. All four people on board, including a 2-month-old baby girl, a nurse and a flight medic, made it out alive.

Incredibly, no one on the ground was injured by the helicopter, despite it landing in a residential neighborhood, about a block away from local eateries and about half a mile from a school.

Pilot Daniel Moore is pictured waving to a crowd of well-wishers after being discharged on Sunday, five days after a helicopter crash in Delaware County, Pennsylvania 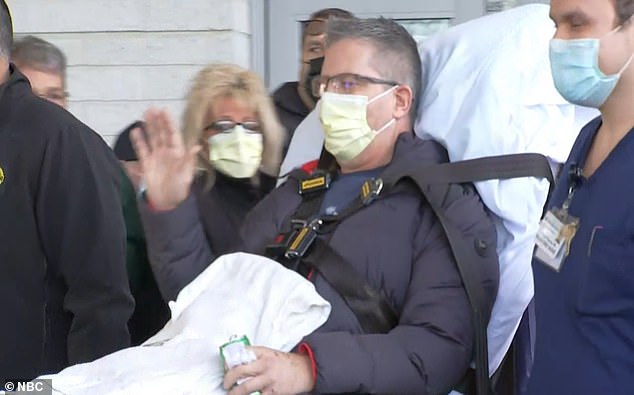 Moore suffered multiple broken bones when the aircraft he was piloting with four people on board, including a sick infant being airlifted to a hospital, crash-landed outside a church 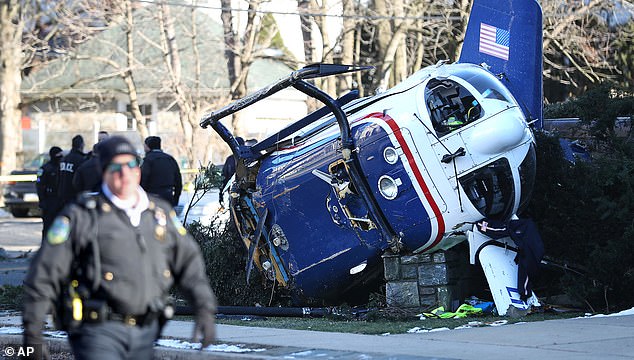 Moore’s chopper is seen resting on its side following the January 11 crash-landing in Drexel Hill, Pennsylvania 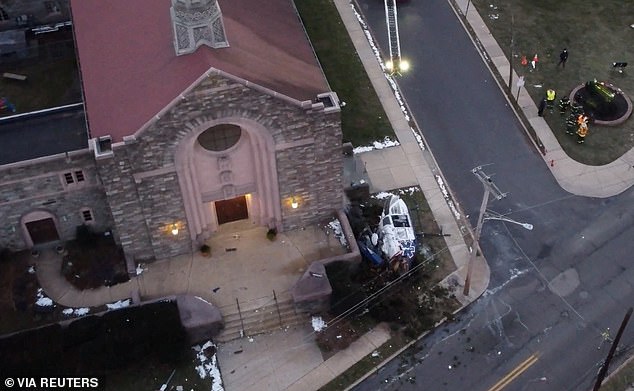 Moore said of the crash outside Drexel Hill United Methodist Church: ‘I had God as my co-pilot that day, and we took care of the crew and we landed in His front yard, so that was kind of nice’

Moore, who has been flying helicopters for 27 years, suffered a slew of injuries, including eight broken ribs, four vertebrae fractures and a fractured sternum, and underwent surgery.

The other occupants of the aircraft, including the infant he was transporting to Children’s Hospital of Philadelphia, were uninjured.

Speaking to Good Morning America from his home in Virginia on Monday, Moore said he does not remember much of what happened in the moments before and after the crash.

‘I do remember flying in. It was a beautiful day. The next this I remember is being on the cold ground,’ Moore said.

In a separate interview with Fox 29, he recalled opening his eyes to find an entire company of firefighters looking down at him, which he was was ‘a great feeling.’

The pilot stressed that the real heroes that day were his flight nurse, who pulled him from under the helicopter, and his flight medic, Kevin Chafee, who made sure the 2-month-old patient was safe before grabbing a fire extinguisher and putting out the flames that ignited inside the aircraft.

Moore also praised the first responders who rushed to the scene of the wreck to help the survivors. 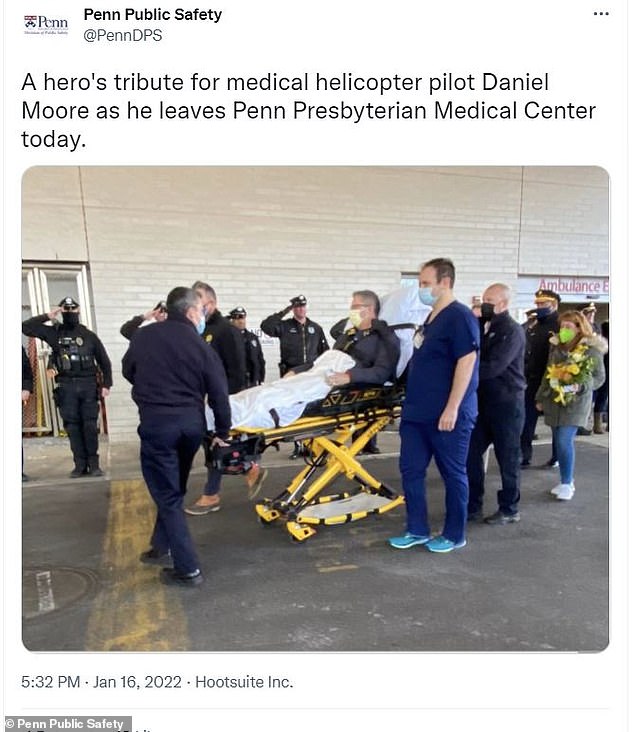 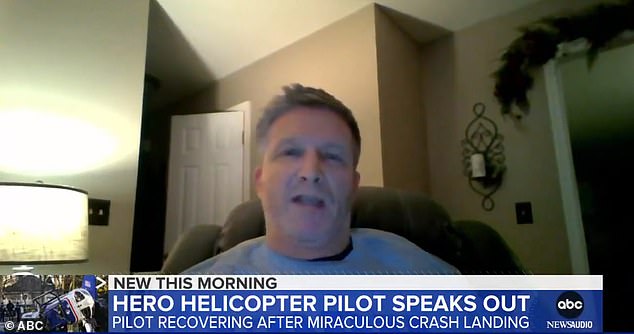 Speaking to GMA from his home in Virginia on Monday, Moore said he does not remember the impact 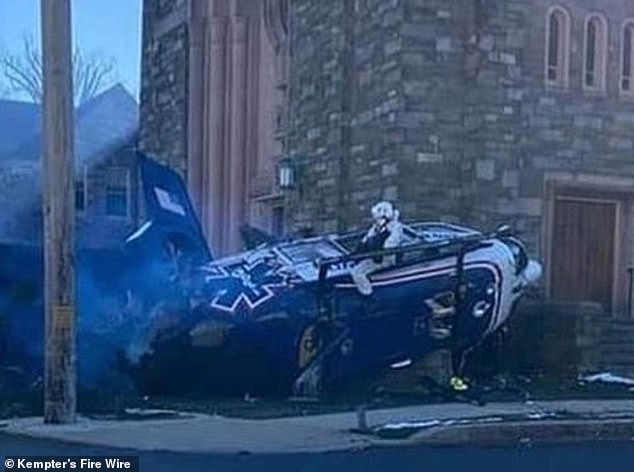 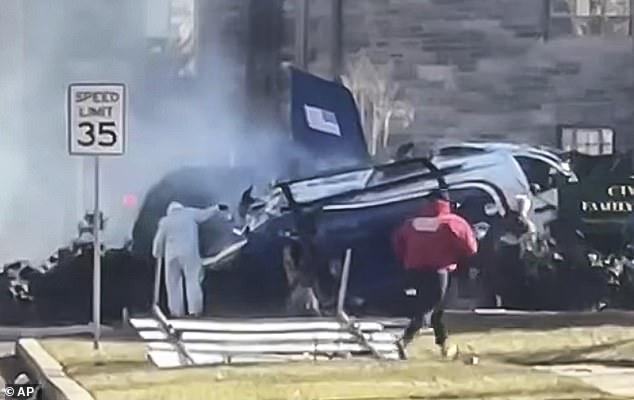 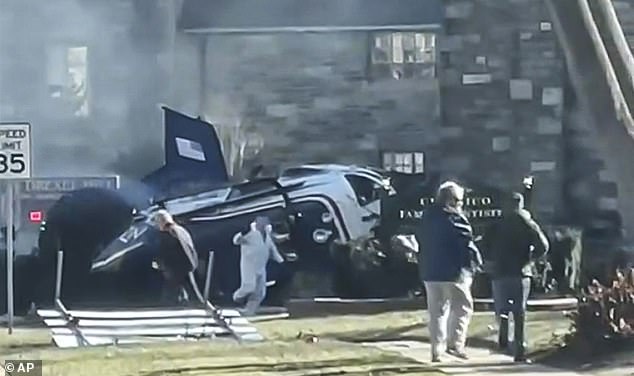 ‘I was just a lump on the ground and they were taking care of me,’ Moore added.

Moore’s fiancée, Gail Miller, accompanied him on the ride home from the hospital on Friday and praised his actions, but also attributed the outcome of the crash to divine intervention.

‘What happened that day was not short of a miracle,’ she told CBS Philadelphia, ‘When I talked to my children, I told them there were two pilots in that aircraft that day, Dan and God and how he missed the church, power lines. No one in the ground was injured.’

Video footage from local news outlets showed smoke billowing from the helicopter as it lay in a residential neighborhood.

Upper Darby Fire Chief Derrick Sawyer called it a ‘miraculous landing’ and said the community was ‘truly blessed’ by the outcome. Even the church appeared largely unscathed.

A local man who was out running errands with his family said his body filled with terror as the helicopter appeared to drop directly above them.

‘I was actually frozen for a second when that happened because I was just looking at a helicopter,” Joshua James told CBS Philadelphia. ‘It’s no way to explain it. It almost feels like something from Game of Thrones, you see a dragon coming at your car because it was literally in the sky, a huge object coming toward you. It was insane.

Witness Jarrell Saunders, who works at a nearby apartment complex, said he noticed the helicopter was in trouble before the crash.

Moments later, he watched as the chopper landed on the road and slid into the church. As smoke began emerging from the downed aircraft, its occupants began leaping out, he said.

‘I’m telling my grandkids about this one,’ he told the outlet. 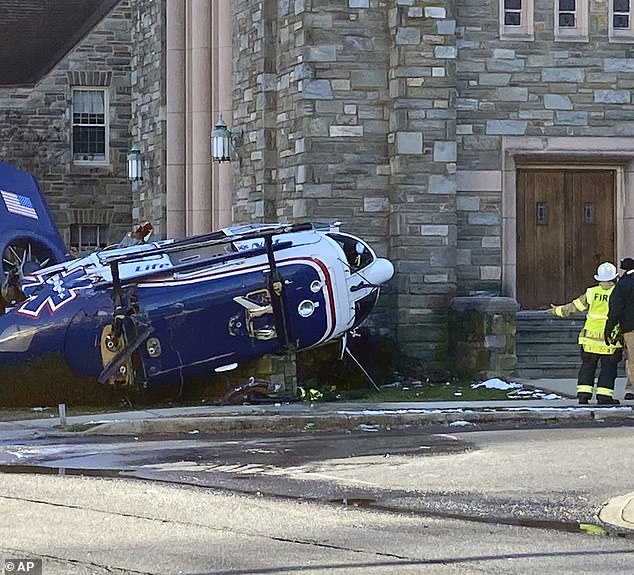 Incredibly, no one on the ground was injured by the helicopter. The passengers and the pilot all suffered non-life threatening injures. The church did not appear to sustain significant damage in the crash 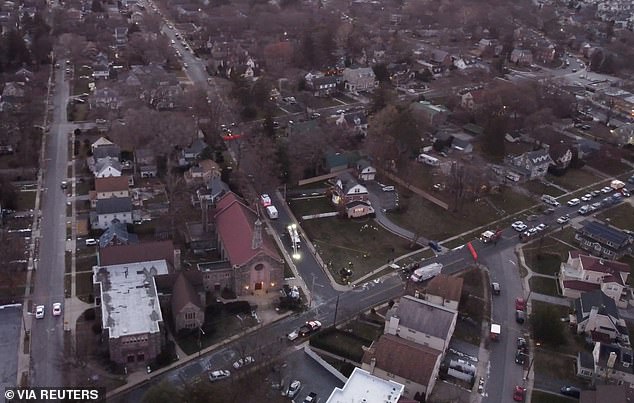 It was a ‘miracle’ that none of the four people aboard, including an infant patient, suffered life-threatening injuries, Upper Darby Police Superintendent Timothy M. Bernhardt said 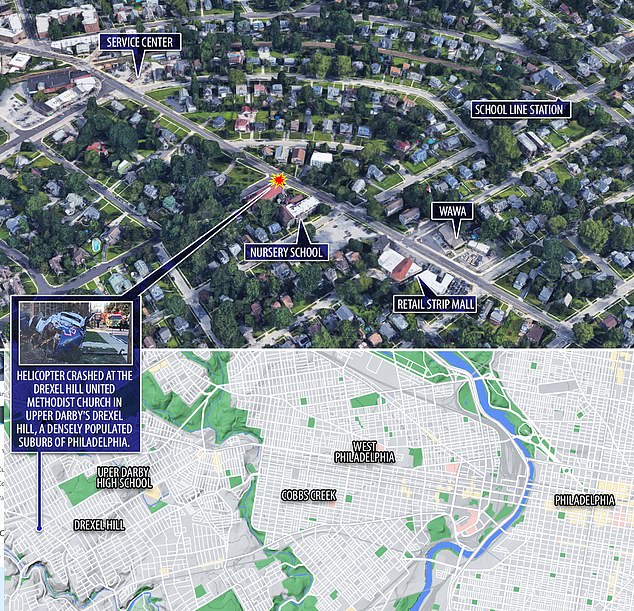 The helicopter landed in a residential area, not far from residential homes, a school, and local stores 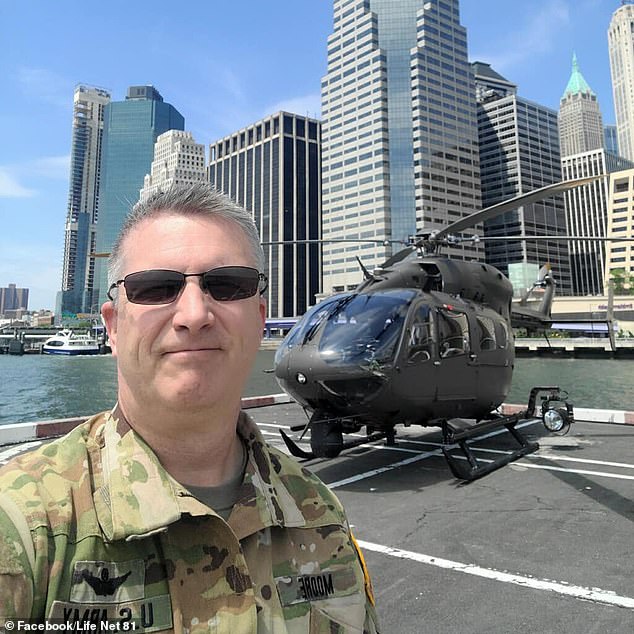 The twin-engine EC 135 chopper was based in Hagerstown, Maryland and was operated through a local medical service called LifeNet, aircraft owner Air Methods said in a statement.

The Federal Aviation Administration and the National Transportation Safety Board are investigating the cause of the crash.

‘Our team will cooperate fully with their efforts to assess the cause of this unfortunate accident,’ the statement said. ‘Privacy rights with regards to those on board the aircraft will be honored, and we will not be sharing any additional information.’ 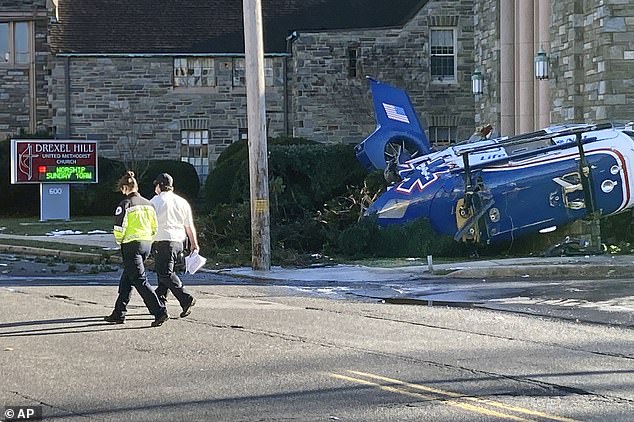 The twin-engine EC 135 chopper was based in Hagerstown, Maryland and was operated through a local medical service called LifeNet

'The Bold and the Beautiful': Fans Are Thrilled the Finn-Paris Affair Didn't Happen

Body of woman in her 20s pulled from river after man, 24, arrested for murder as cops trace bloody trail