The PM laid down a marker about the need for domestic production to be maintained as Cabinet discussed soaring energy costs and volatility over Ukraine.

The session came after oil giant BP announced £9.5billion profits – but warned that any attempt to impose a windfall tax would crush investment in the North Sea.

No10 insisted it still does not support a windfall tax on fossil fuel firms.

Mr Johnson has declared he wants the UK to reach the carbon emissions status by 2050.

The regulator – the Oil and Gas Authority – is reportedly considering giving the green light for drilling in six fields, although some have been licensed for decades. 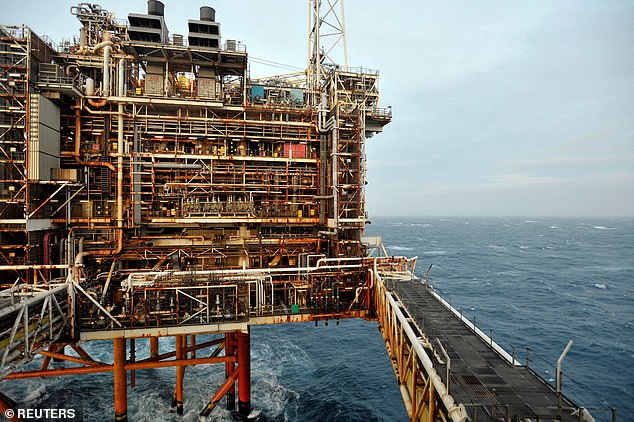 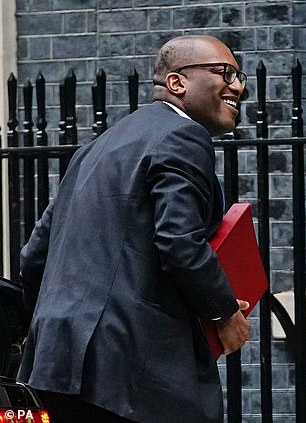 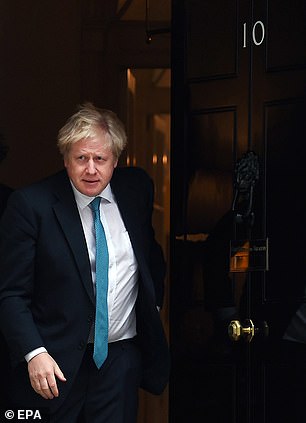 Business Secretary Kwasi Kwarteng (left) is understood to be ‘firmly backing’ North Sea development amid pressure to speed up Net Zero progress. Boris Johnson (right) has declared he wants the UK to reach the carbon emissions status by 2050

They are the Rosebank field, to the west of Shetland, and at Jackdaw, Marigold, Brodick, Catcher and Tolmount East in the North Sea.

The combined reserves are thought to be enough to power the UK for six months, with 62million tonnes of oil-equivalent fuel in the ground.

A Whitehall source told The Daily Telegraph: ‘The Business Secretary is pushing for more investment into the North Sea while we transition… Kwasi is actively resisting insane calls from Labour and the eco-lobby to turn off UK production.

‘Doing so would trash energy security, kill off 200,000 jobs, and we would only end up importing more from foreign countries with dubious records.’

The PM’s spokesman said: ‘There is obviously volatility in gas prices, you are seeing that reflected in profits.

‘I am not going to comment on individual companies. Those that perform well pay more in taxes, including corporation tax.’

The spokesman said the UK was investing in renewables to provide further security of supply, with important roles for nuclear and offshore wind, as the economy moved towards net zero.

‘The oil and gas industry will continue to play a role as we make that transition. They are investing in clean technologies like carbon capture and hydrogen that we need to get to net zero,’ the spokesman said.

‘We know that having an element of independence of oil and gas is important. Sourcing gas locally through the North Sea makes us less dependent on foreign imports.’

A BEIS spokesperson said: ‘There will continue to be ongoing demand for oil and gas over the coming years as we transition to cleaner, more secure forms of energy generated in this country.

‘As the Business Secretary has said, turning off our domestic source of gas overnight would put energy security, British jobs and industries at risk, and we would be even more dependent on foreign imports.’

BP insisted that it is heavily investing the profits it makes back into shifting to lower carbon alternatives to fossil fuels as it announced plans alongside its results to boost investment in renewable energy.

He said: ‘We need more gas, not less gas, and therefore we need to encourage investment into the North Sea and not discourage it.’

BP’s results showed a marked recovery from a torrid 2020, when the pandemic sent it slumping 18.1 billion US dollars (£13.4billion) into the red on a statutory basis – its biggest ever annual loss.

Oil and gas prices have since rebounded as economies worldwide reopened following the early stages of the Covid crisis, with a demand crunch pushing the cost of crude past 90 US dollars a barrel for the first time in more than seven years.

Android NUDE block: AI will detect sexy photos and tell you to DELETE them immediately