A man, who witnesses say “ran up” to Queen Elizabeth’s coffin as it lay in state at Westminster Hall, has been arrested.

The man was detained in the hall by the Metropolitan Police’s parliamentary diplomatic protection command following “a disturbance” about 10pm on Friday local time, Scotland Yard said in a statement.

He was arrested for an offence under the Public Order Act and is currently in custody, police said.

Shocked onlookers said the man tried to touch the Queen’s coffin and was quickly taken down by officers.

“Some person decided they were going to push my seven-year-old niece out the way, run up to the coffin, lift up the standard and try to do I don’t know what,” witness Tracey Holland said.

“She was grabbed out the way and the police had him within two seconds.”

Another man in the queue told Nine News: “I think it’s completely shocking and completely disrespectful.”

Just hours earlier, the Queen’s four children had stood vigil at her coffin. 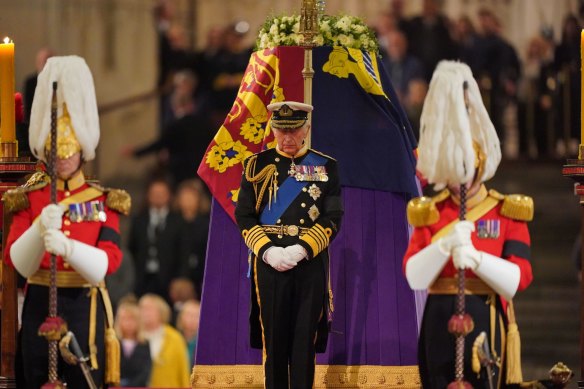 King Charles III stands vigil beside the coffin of his mother, Queen Elizabeth II, as it lies in state on the catafalque in Westminster Hall, at the Palace of Westminster, on September 16.Credit:GETTY IMAGES

It comes after police charged a man with two counts of sexual assault after two women were allegedly assaulted in a garden as people queued to see the coffin.

“As those present in the queue will have seen, officers were on hand to immediately respond and arrest the man,” Deputy Assistant Commissioner Stuart Cundy said in a statement.

“Stewards and police officers in London are present throughout the route to help and support those who are queuing to pay their respects to Her Majesty the Queen … There has been very little crime or other incidents where officers have had to intervene.”

The queue to see the coffin was more than 25 hours long on Friday night local time, despite temperatures falling as low as 7 degrees. The Department for Digital, Culture Media and Sport has said the queue is at capacity ahead of the Queen’s funeral on Monday.

“The queue is near total capacity with a wait time of at least 25 hours,” it said.

Rachael Kirkconnell on Racist Photos: I Didn’t Think Anyone Would Care!

Who Would Be Your Perfect Selling Sunset Realtor? Take Our Quiz and Find Out

Afternoon tea fit for the Queen!

Aspinal of London Black Friday Sale 2020: What to expect | The Sun UK