The 74-year-old Spaniard was taken into custody in Miranda de Ebro in the country’s north and taken to Madrid where he will appear before a judge on Friday, said a spokesman for the National Court which deals with terrorism cases.

The arrest came after a weekend report in the New York Times which said Russian military intelligence officers had ‘directed’ associates of a white supremacist militant group based in Russia to carry out the campaign in Spain.

US officials told the newspaper that the Russian officers who directed the campaign appeared intent on ‘keeping European governments off guard’ and ‘may be testing out proxy groups in the event Moscow decides to escalate a conflict’. 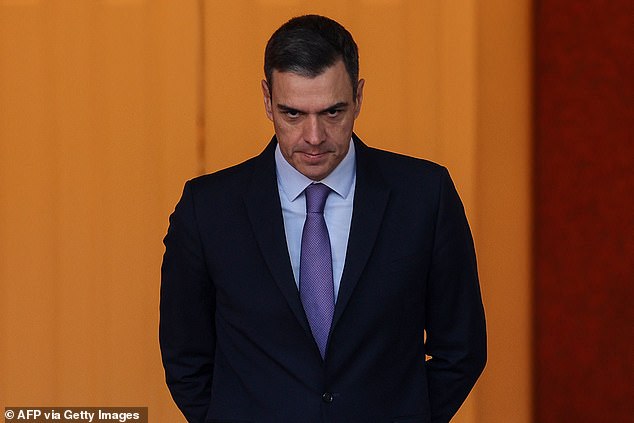 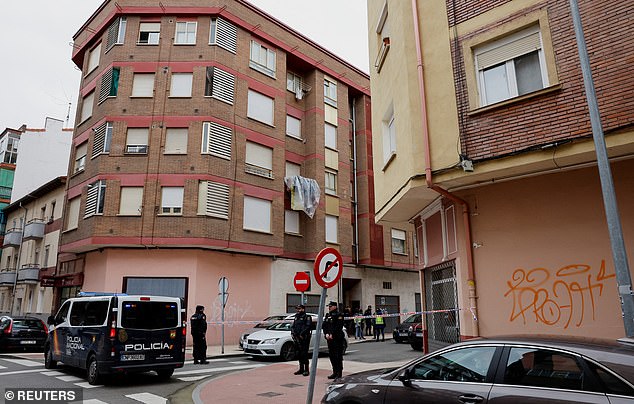 Spanish police officers stand guard outside a building after the arrest of a man suspected of being the sender of letter-bombs in November and December to the Ukrainian and U.S. embassies and several institutions in Spain, in Miranda de Ebro, Spain January 25

Investigators searched the suspect’s home where he was thought to have made six letter bombs, police and the interior ministry said.

‘This person was very active on social networks and according to National Police investigators, he has technical and computer expertise,’ an interior ministry statement said.

‘Although it is presumed that the detainee made and sent the explosive devices alone, the police do not rule out the participation or influence of other people.’

Nobody was killed by the six letter bombs sent in late November and early December to various sites in Spain, but a Ukrainian embassy employee was lightly injured while opening one of the packages.

Letters were sent to the official residence of Prime Minister Pedro Sanchez, to Spain’s defence ministry and to an air base near Madrid from which Spain has sent weapons to Ukraine.

Also targeted was a military equipment firm in the northeastern city of Zaragoza, which makes grenade launchers that Spain has sent to Ukraine.

After the Madrid embassy was targeted, Kyiv ramped up security at its embassies around the world. 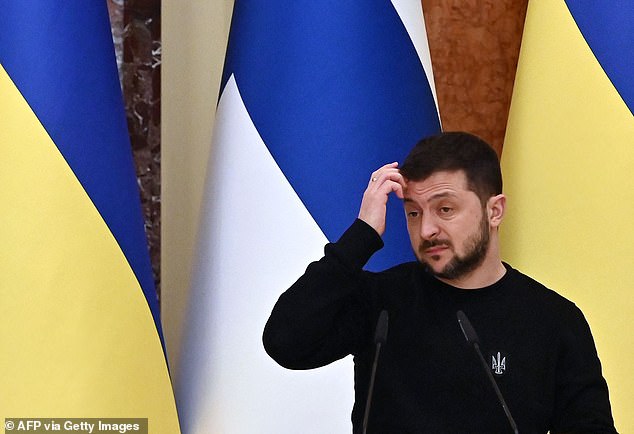 Ukrainian president Volodymyr Zelensky is pictured in Kyiv, Jan 24. Ukraine boosted security at its embassies around the world after the discovery of letter bombs

Investigators suspect the Russian Imperial Movement (RIM), a radical group with members and associates across Europe, is behind the letter bomb campaign.

The group – which is designated a global terrorist organisation by the United States – is believed to have ties to Russian intelligence agencies.

‘Important members of the group have been in Spain, and the police there have tracked its ties with far-right Spanish organisations,’ the newspaper said.

According to Stanford University’s Center for International Security and Cooperation, RIM ‘maintains contacts with neo-Nazi and white supremacist groups across Europe’.

‘The group has provided paramilitary training to Russian nationals and members of like-minded organisations from other countries at its facilities in St. Petersburg,’ it added. 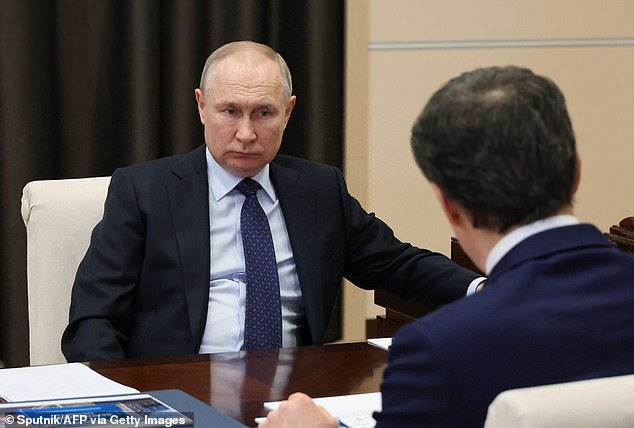 Russian President Vladimir Putin is pictured at the Novo-Ogaryovo state residence outside Moscow on January 24, 2023

After the embassy attack, Ukraine’s ambassador to Spain, Serhii Pohoreltsev, appeared to point the finger at Russia.

‘We are well aware of the terrorist methods of the aggressor country,’ he told Spanish public television on November 30 just hours after the incident.

After congratulating police on the arrest, Interior Minister Fernando Grande-Marlaska said investigators were ‘looking at all possibilities’.

Private television La Sexta, which first broke the news of the pensioner’s arrest, said the suspect was a former local authority employee in Vitoria, a town in northern Spain, who lived alone.

In addition to sending arms to Ukraine in its fight against Russia’s nearly year-long war, Spain is also training Ukrainian troops as part of a European Union programme and providing humanitarian aid.

Is this a mistake? Just $14.50 for a top-rated massage gun that 'came from the heavens'?