In unprecedented scenes, detectives arrived at the official home in Paris where Mr Macron lives with his wife, Brigitte, on Wednesday afternoon.

Sources involved in the swoop claim it was in connection with Alexandre Benalla, 26, pretending to be a policeman as he assaulted two victims. 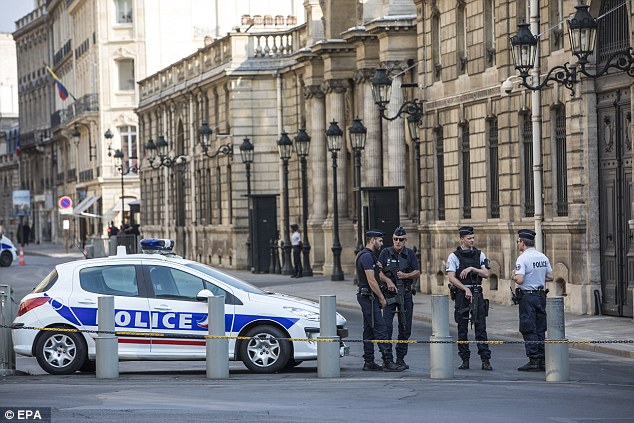 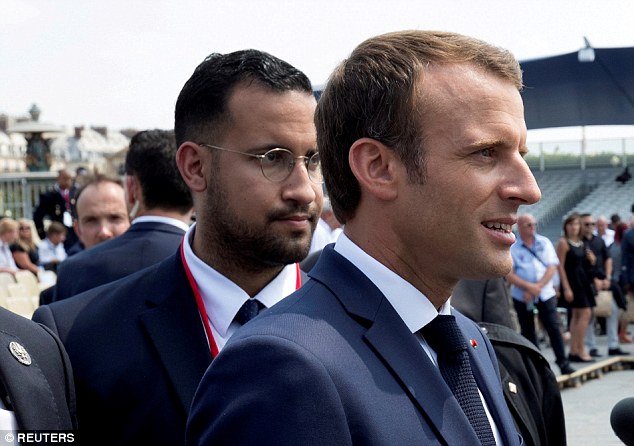 Four others have been charged with a range of crimes including gang violence alongside Benalla, who until last week was Mr Macron’s deputy chief of staff and responsible for security around the president.

‘Mr Benella is with the police, and the search is focused on his former office in the Elysee,’ said a one of the Paris sources.

‘Neither Mr Macron nor his wife are in the building, but would have been informed about the raid, along with other officials. It was ordered by an examine judge, and Mr Benalla provided keys.

‘Detectives are confiscating computers, notebooks and other material linked to the Benalla case.’

It was on Tuesday that Mr Macron took ‘full responsibility’ for the Benalla scandal, after initially trying to hide away from it. 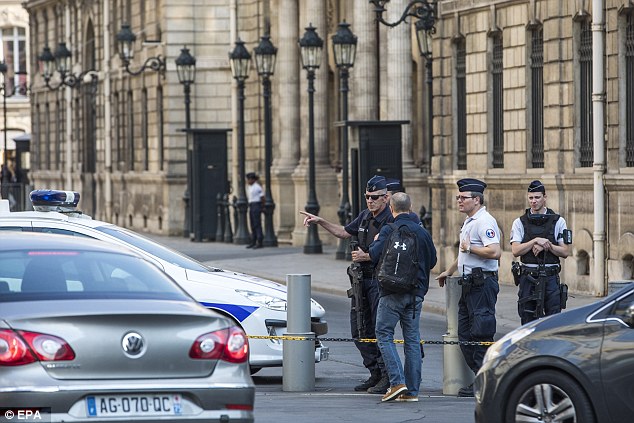 Raid: Detectives are pictured outside the Elysee Palace in central Paris on Wednesday

Video emerged last Wednesday of Benalla pretending to be a policeman so as to assault two victims, including a woman, at a rally in Paris on May Day.

But it was not until Tuesday evening that Mr Macron told MPs at a meeting: ‘What happened on May 1 was for me a betrayal.

‘The exemplary French Republic does not disguise mistakes. If they want someone to take responsibility, he is in front of you.

‘The only person responsible is me and me alone, and they can come to me. I answer to the French people.’

Mr Macron initially appointed Benalla to his staff when he was running for president, and then sanctioned a 15 day suspension from duty for Benalla after the trouble in May. 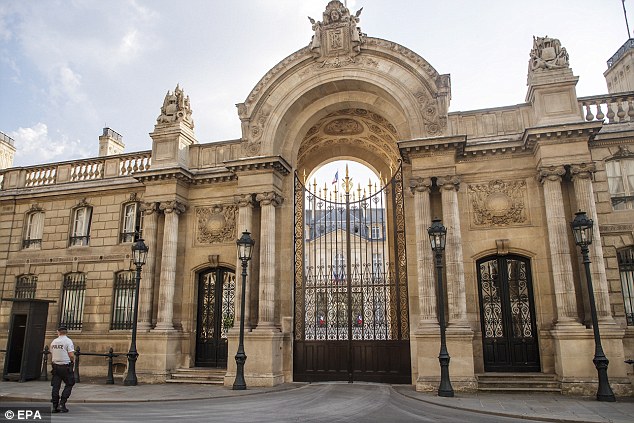 ‘It is me who trusted Alexandre Benalla, it is me who confirmed the punishment,’ said Mr Macron.

He went on to attack the amount ‘of hatred’ in France, saying that ‘You cannot be a good leader in good weather alone.’

It was on Monday that Benalla himself first spoke about a scandal that could see him imprisoned along with the four co-accused. 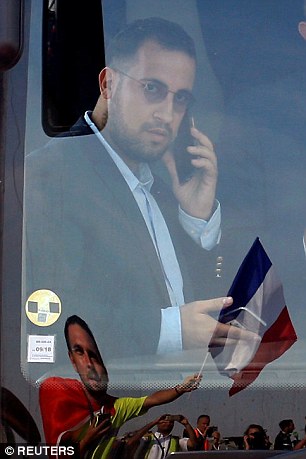 Mr Benalla, 26, is pictured returning from the World Cup in Russia last week

Referring to the video, he said through his lawyers that he was ‘stunned by the media and political reaction towards my behaviour towards two troublemakers who assaulted the police.’

Benalla insisted no-one was injured, and that ‘the individuals were arrested, presented to a judicial police officer, and did not lodge a complaint against anyone.’

Despite this, Benalla was on Sunday night indicted with charges including violence at a public meeting, impersonating a police officer and trying to destroy video evidence.

Vincent Crase, a former bodyguard who worked for Mr Macron during his election campaign last year, faced similar charges, after being accused of working with Benalla at the May 1 demonstration.

Three policemen, meanwhile, were accused of giving Benalla video surveillance images of his assaults in ‘breach of professional secrecy’.

They are said to have hidden the footage in the hope that it could not be used as evidence.

All of the men were on Sunday night bailed to appear in court at a later date after judicial police spent the weekend interviewing them.

Benalla, who used to ski and cycle with Mr Macron, was initially suspended from the Elysee Palace staff for just fifteen days, but his alleged crimes were otherwise hushed up.

It was only when opposition politicians saw the incriminating footage of him on social media that further action was taken. 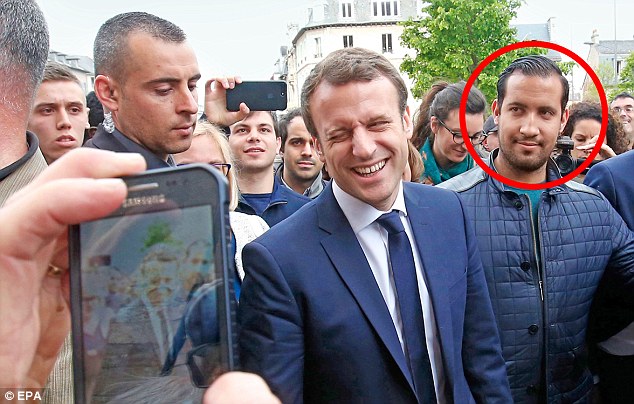 Sacked: Mr Benalla (circled and pictured next to the French President) has left his position

Is It Hot In Here? Brace Yourself For the Sexiest Grammys Looks