Police have arrested more then 200 people in a national crackdown on ‘county lines’ drugs gangs.

In a week of raids throughout the country involving dozens of police forces, they also rescued 58 vulnerable people and seized a number of weapons including a samurai sword, a gun and knives.

There are thought to be around 1,500 of the networks in operation in the UK, which involve urban dealers forcing children to carry drugs to customers in more rural areas. 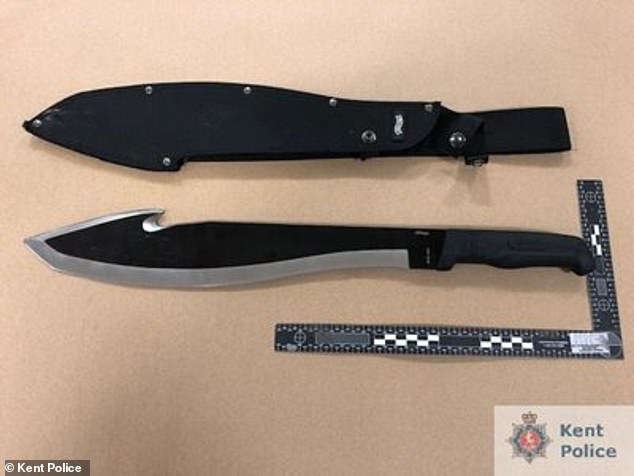 Kent Police managed to seize knives, cash and packets of what is thought to be heroin and crack cocaine

They also ‘cuckoo’ the homes of vulnerable or drug-addicted people, taking them over and using them to stash illegal substances.

The National Crime Agency said every force in England and Wales has reported some form of county lines activity.

Weapons including a loaded gun, an axe, a meat cleaver, hunting knives and a samurai sword were also recovered, as well as tens of thousands of pounds in cash, and drugs including heroin and crack cocaine.

Those arrested included criminals already serving prison sentences who were charged with involvement in the supply of class A drugs from behind bars.

The new National County Lines Co-ordination Centre, set up in September, is mapping the activities of the gangs, which are mainly based in large cities such as London, Liverpool and Birmingham, but operate all over the country.

They commonly use one phone line – that can make up to £5,000 per day – which drug users ring to order illegal substances. 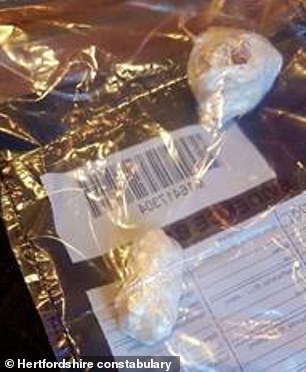 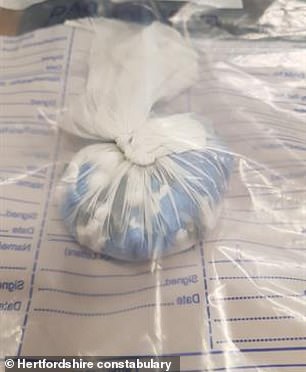 Sue Southern, county lines lead for the National Crime Agency, said: ‘Supply gangs are responsible for high levels of violence and the exploitation and abuse of vulnerable adults and children, and every territorial police force in England and Wales has now reported some level of county lines activity.

‘There are currently hundreds of live county lines investigations across the UK, and this period of intensification highlights the range of co-ordinated activity taking place to identify perpetrators, reduce violence, take away the proceeds of crime and safeguard the vulnerable.

‘While these operations will have substantially disrupted numerous county lines, our work is ongoing and we are pursuing all available means of strengthening the national response.’