Prince Harry laughs as he CONFIRMS he watches The Crown – hinting he’s even seen ‘more recent’ episodes that dramatize Diana’s bulimia battle and bitter divorce from Charles (so why did he STILL go ahead with $100M Netflix deal?)

Prince Harry has confirmed that he watches Netflix’s controversial series The Crown – laughing as he revealed in a new bombshell TV interview that he has watched the ‘more recent’ episodes that portray ‘sensationalized’ accounts of his late mother Diana’s bulimia battle and her bitter divorce from Charles.

The 38-year-old made the admission during an appearance on The Late Show with Stephen Colbert, with a teaser trailer for the pre-taped sit-down capturing Harry laughing uproariously while joking to the TV host that he ‘fact checks’ the highly-criticized show.

‘Yes I have actually watched The Crown,’ Harry – who has a production deal with Netflix that is reported to be worth $100 million – told Colbert after the late night host asked if he had seen the series.

‘The older stuff and the more recent stuff.’

Harry then burst into fits of laughter and mimed taking notes as Colbert questioned whether he ‘fact checks’ the show – before admitting: ‘Yes, I do actually.’ 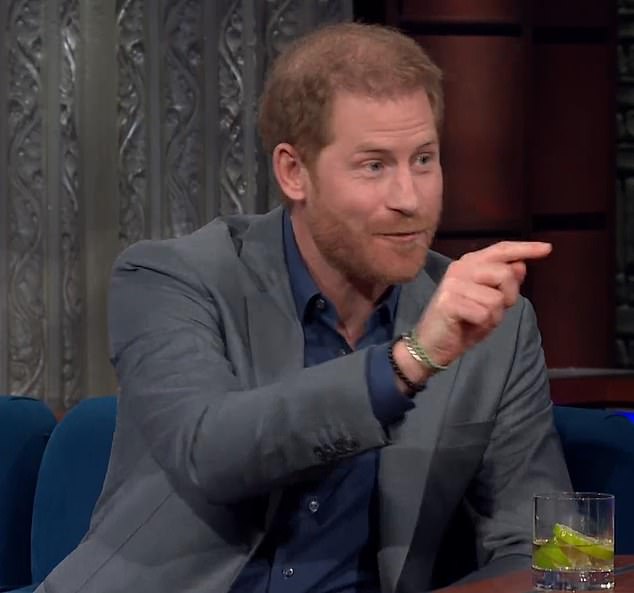 Prince Harry has confirmed that he watches The Crown, revealing during an interview on The Late Show with Stephen Colbert that he has seen the ‘older and more recent stuff’ 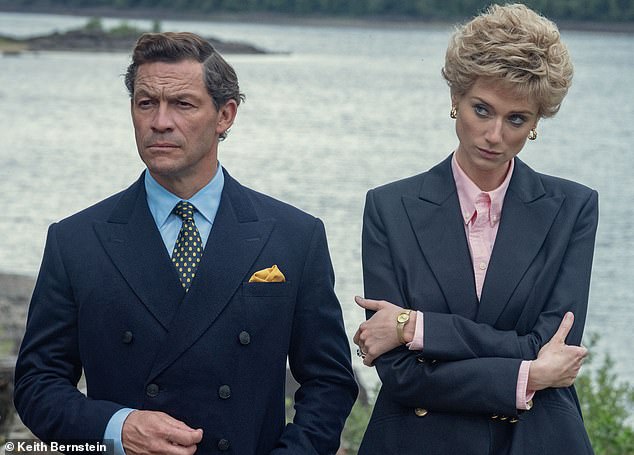 He then suggested that The Crown does not offer an entirely factual version of events – before pointing at his bombshell memoir Spare as an apparent example of accuracy, saying: ‘Which is why it’s so important that history has it right.’ 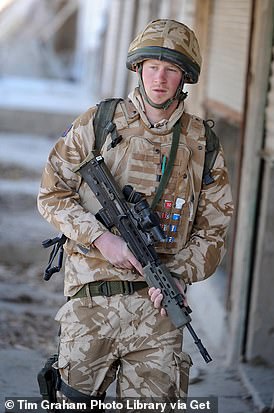 Despite his jovial response to the question, the Duke’s admission that he’s watched multiple episodes of the show will likely prompt furious criticism and questions about why he and wife Meghan Markle have continued to work with streaming giant Netflix, despite its brutal portrayal of the royal family – and Harry’s parents in particular.

Season five of the series – which is the most recent – drew bitter backlash over its ‘malicious’ storylines, which included agonizing portrayals of the breakdown of Charles and Diana’s marriage, as well as a fictional scene in which the future King is seen plotting to overthrow the Queen.

The latest storylines have been widely bashed for their ‘malicious’ and ‘lurid’ content with critics branding Harry a ‘hypocrite’ for refusing to pull the plug on his Netflix deal in response to the streaming giant’s portrayal of his family.

To add insult to grievous injury, season five of the show was released just a matter of weeks after the Queen passed away at the age of 96.

One of the late Monarch’s close friends spoke out against the series in October, telling The Sunday Times that the latest season of The Crown ‘would have destroyed the Queen’ because of how ‘vicious’ the dramatized plotlines are.

Such was the outrage over the content of the latest series that Netflix was forced to add a disclaimer to the show’s description last year in which it made clear The Crown is a ‘fictional dramatization’.

Meanwhile the season four included scenes that depicted Diana’s bulimia battle – showing her gorging on food before vomiting into a toilet in clips that were deemed to be so graphic they carried on-screen warnings.

Although Harry did not confirm which episodes he has and hasn’t watched, his revelation that he’s seen both the ‘older and more recent stuff’ suggests that he’s been privy to at least a small portion of that content.

It is understood that the upcoming season of the show will also feature graphic portrayals of the hours leading up to Diana’s death.

While it was initially reported that the Princess’s fatal Paris car crash would be included in the latest season of The Crown, it is now understood that it will in fact be featured in the opening episodes of the upcoming instalment. 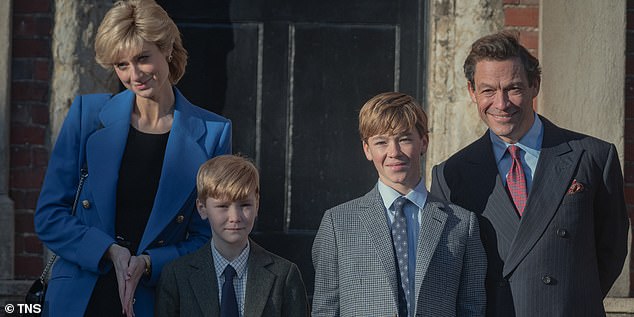 Harry features in the latest episodes of the show (seen center left) – which has been slammed over its ‘callous’ portrayal of the royal family, including Diana and King Charles 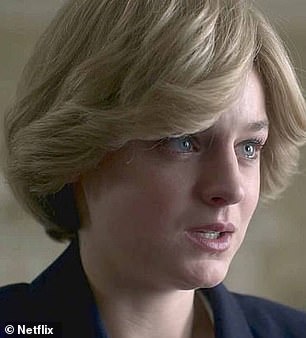 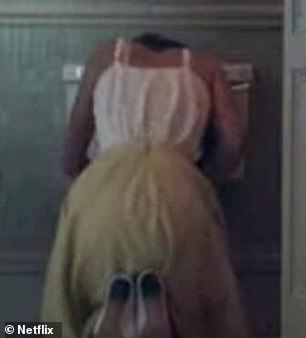 Season four of the show depicted Diana’s battle with bulimia and featured scenes showing actress Emma Corrin binging and vomiting into a toilet, which were deemed so graphic they carried an on-screen warning 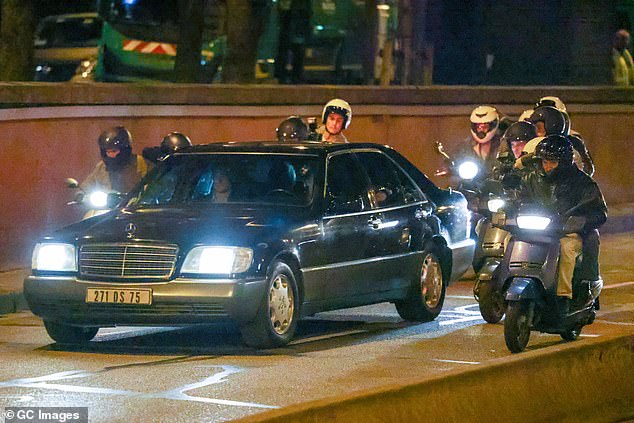 Although Netflix has insisted that it will not show the ‘exact moment’ of Diana’s death, on-set images reveal the streaming giant plans to show the lead-up to it in agonizing detail

On-set images taken at the end of 2022 revealed the gruesome staging of the Paris car crash that claimed her life, as well as a recreation of her funeral at which Harry and William famously walked behind her coffin.

Netflix has insisted the ‘exact moment’ of the crash will not feature in the controversial drama, however the photos suggest that the series will capture the moments leading up to the fatal collision in horrifying detail.

Exclusive photos published by the Daily Mail in October showed the filming of a Mercedes-Benz – which is an identical copy of the vehicle in which Diana was traveling when she died – just 100 yards away from the Pont de l’Alma tunnel, where the crash happened in the early hours of August 31, 1997.

Netflix has been met with fury over its plans to dramatize the hours leading up to the accident, with reports even suggesting that The Crown’s own crew members had been left up in arms over an apparent decision to make actress Elizabeth Debicki lie in an open coffin and pretend to be the dead Princess Diana.

Onlookers on set told The Sun that cast members were visibly upset during the filming of the scene.

One said: ‘They actually made Elizabeth climb into a coffin and play dead as Diana. Viewers will see a French priest administering the last rites for Diana as she is pronounced deceased.

‘Prince Charles enters the room and is in floods of tears. In his hysteria he notices that Diana is missing an earring. It is all he can focus on as grief envelops him.’

They added: ‘Princes William and Harry never saw their mother dead in a coffin and they shouldn’t have to watch this. Nor should the British public.’ 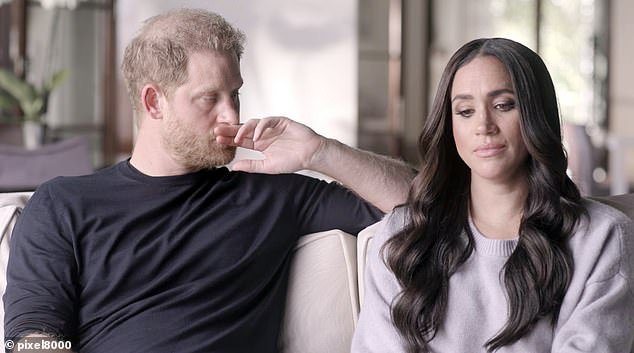 Harry has been branded a ‘hypocrite’ for continuing to work with Netflix despite the streaming giant’s portrayal of his family. The Sussexes signed a deal with the site in 2020 that is reported to be worth $100 million and released their own tell-all docuseries on Netflix last month (seen) 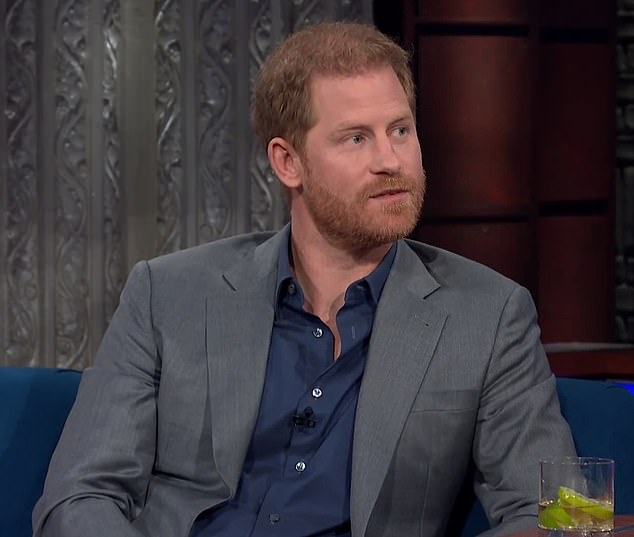 During his Colbert interview, Harry showed no signs of upset about The Crown’s depiction of his family, laughing uproariously at one point as he joked that he ‘fact checks’ the show

The sixth season of the show will also reportedly feature medics covered in blood trying to save Diana, a distraught Prince Charles after seeing the body, and Prince William and Prince Harry at the funeral. 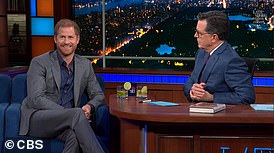 Harry did not reveal whether he is aware of this information – or whether he plans to watch the streaming platform’s dramatic retelling of his mother’s tragic death, and indeed his own struggle to cope with it.

However, the Duke of Sussex’s laughing admission that he watches the show suggests that he has no plans to join the increasing crowd of critics who have furiously bashed its ‘cruel’ depiction of the royal family.

Indeed the only comment that the father-of-two has made about The Crown in the past came during an interview with another late night host – his close pal James Corden – to whom he actually defended the series.

In a 2021 on-air chat with Corden, Harry said of the show: ‘They don’t pretend to be news, it’s fictional. It’s loosely based on the truth.

‘Of course it’s not strictly accurate but it loosely it gives you an idea of that lifestyle and the pressures of putting duty and service above everything else and what can come from that.

Harry added he would like Homeland actor Damian Lewis to play him if his character ever appears on the show as an adult.

Horoscope today, Monday July 4: Daily guide to what your star sign has in store for your zodiac dates | The Sun

Think You Know the Priest From 13 Reasons Why? You're Right!