Hindu nationalists have burnt effigies of film stars in protest over a sexy dance routine in an Indian film that showed an actress wearing a saffron dress.

Indian actress Deepika Padukone, 36, throws back her hips in beachwear during a musical segment of the Bollywood film Pathaan, saying: ‘The moment I feel a wave of modesty, I throw it to the wind. The world hasn’t seen my true colours.’

The music video was too much for Narottam Mishra, a Bharatiya Janata Party (BJP) minister in Madhya Pradesh — the ruling party in India under Prime Minister Narendra Modi — who said ‘the film Pathaan has been shot with a dirty mindset’

But it wasn’t her dancing that offended the minister. He took umbrage at the colour of her dress — a saffron hue traditionally worn by Hindu saints.

Indian actress Deepika Padukone, 36, is pictured gyrating to dance music as part of a musical segment in the Bollywood film Pathaan, pictured. Protests are rocking India because of the actress’ saffron-coloured dress, traditionally worn by Hindu saints

Parthaan, the film that includes the sexy dancing, is due to come out next month. Offended viewers filed a complaint against the actors for offending religious sentiments in an attempt to get the Broadcasting Ministry to censor the film 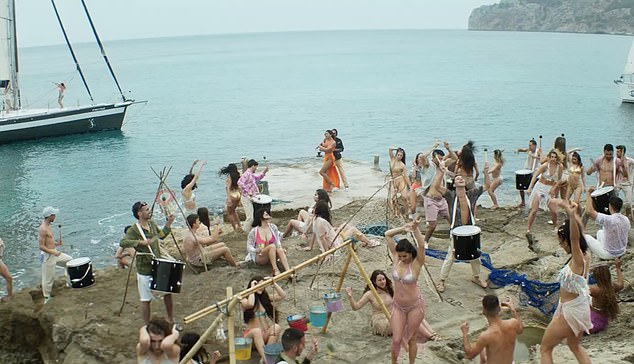 Protesters are burning effigies of the actors and director. Saffron garments are most commonly associated with asceticism, is a lifestyle followed by holly figures who abstain from sensual pleasures

‘The costumes in the song at first glance are objectionable,’ Mishra told reporters, according to The Times.

Saffron garments are most commonly associated with asceticism, a lifestyle followed by holy figures who abstain from sensual pleasures. The colouring of the dress – and its use in a scene showing sexual and promiscuous dancing – sparked anger among Hindus.

Offended viewers filed a complaint against the actors for offending religious sentiments in an attempt to get the Broadcasting Ministry to censor the film.

The music video, sung in a mix of Hindu and Spanish, is being used to promote the action film, set to come out next month.

Following the controversy surrounding his film, Khan was quoted in NDTV as saying: ‘Social media is often driven by a certain narrowness of view that limits human nature to its baser self.

‘I read somewhere that negativity increases social media consumption and thereby increases its commercial value as well. Such pursuits enclose the collective narrative, making it divisive and destructive.’

Ministers like Mishra have objected to Bollywood films and entertainment on religious grounds before, banning a comedian who mocks Hindu extremism from performing last year.

Modi’s party is in power in 13 states in India, with nationalists becoming more outspoken than under previous governments.

Others online rushed to the defence of the actress, who likely had little input on the decision to wear the dress.

Indian women have begun speaking out against harassment over the past decade after a series of famous cases, including the gang rape of Jyoti Singh, prompted a conversation surrounding violence against women.

Millions hit by broken broadband but do you live in one of these UK outage hotspots?

What went wrong with The X-Files revival?