INGLEWOOD, Calif. — Cooper Kupp was about the only option the Los Angeles Rams had on offense by the end of Super Bowl LVI. As it turned out, he's the only one they needed.

Kupp scored a 1-yard touchdown with 1:25 left to cap a dramatic drive in which he also converted a fourth-down attempt with a run, caught a few huge passes and drew two key defensive penalties.

Kupp was the NFL offensive player of the year. He had a historic season. And he was the main reason the Rams beat the Cincinnati Bengals 23-20 to win the Super Bowl. Kupp ended with eight catches, 92 yards and two touchdowns.

Kupp's biggest play wasn't the final touchdown but a 7-yard run on fourth-and-1 from the Rams' 30-yard line. That kept the drive going when the Rams offense was sputtering. Kupp drew a holding penalty later in the drive that was just as big, and a lot more controversial.

Bengals linebacker Logan Wilson was called for holding on Kupp on a third-down incompletion saved the Rams, who got a first down at the Bengals' 4-yard line with less than two minutes to play. It was hard to say Wilson did enough to earn the penalty, but the flag was thrown anyway.

Kupp had a touchdown taken off the board due to offsetting penalties, but on the next play there was another defensive penalty on a Bengals defender trying to guard Kupp, this one on Eli Apple. Kupp scored two plays after that.

The Bengals got to midfield but with 39 seconds left Aaron Donald got to Joe Burrow on fourth down, and Burrow had to throw wildly. It fell incomplete. That clinched the first Super Bowl championship for the Rams in Los Angeles. The Rams' only other Super Bowl title came in St. Louis in 1999.

The Bengals allowed a 92-yard drive to Joe Montana and the San Francisco 49ers to lose Super Bowl XXIII in the final minute. Replace the 49ers with the Rams, and John Taylor with Kupp. It's more heartbreak for the Bengals. They just couldn't contain Kupp when it mattered.

The Rams led 13-3 in the second quarter. There was no way the Bengals were going to fold, two weeks after coming back from 21-3 down to the Kansas City Chiefs in the AFC championship game.

The entire momentum of the game changed on back-to-back plays early in the third quarter. Tee Higgins got away with grabbing Rams cornerback Jalen Ramsey's facemask on a deep pass, got free when Ramsey went to the ground and had a 75-yard touchdown. That gave the Bengals the lead.

Then on the Rams' next play Stafford tried Ben Skowronek, who was replacing injured Odell Beckham Jr., over the middle. Skowronek seemed to hesitate, then the ball went off his outstretched hands and to Chidobe Awuzie for the interception. The Bengals couldn't get in the end zone after that, but got a field goal for a stunning 20-13 lead.

The Rams got a field goal back as the defenses tightened up for the rest of the third quarter. The Bengals led 20-16 going into the fourth quarter. Cincinnati was 15 minutes from its first Super Bowl title. 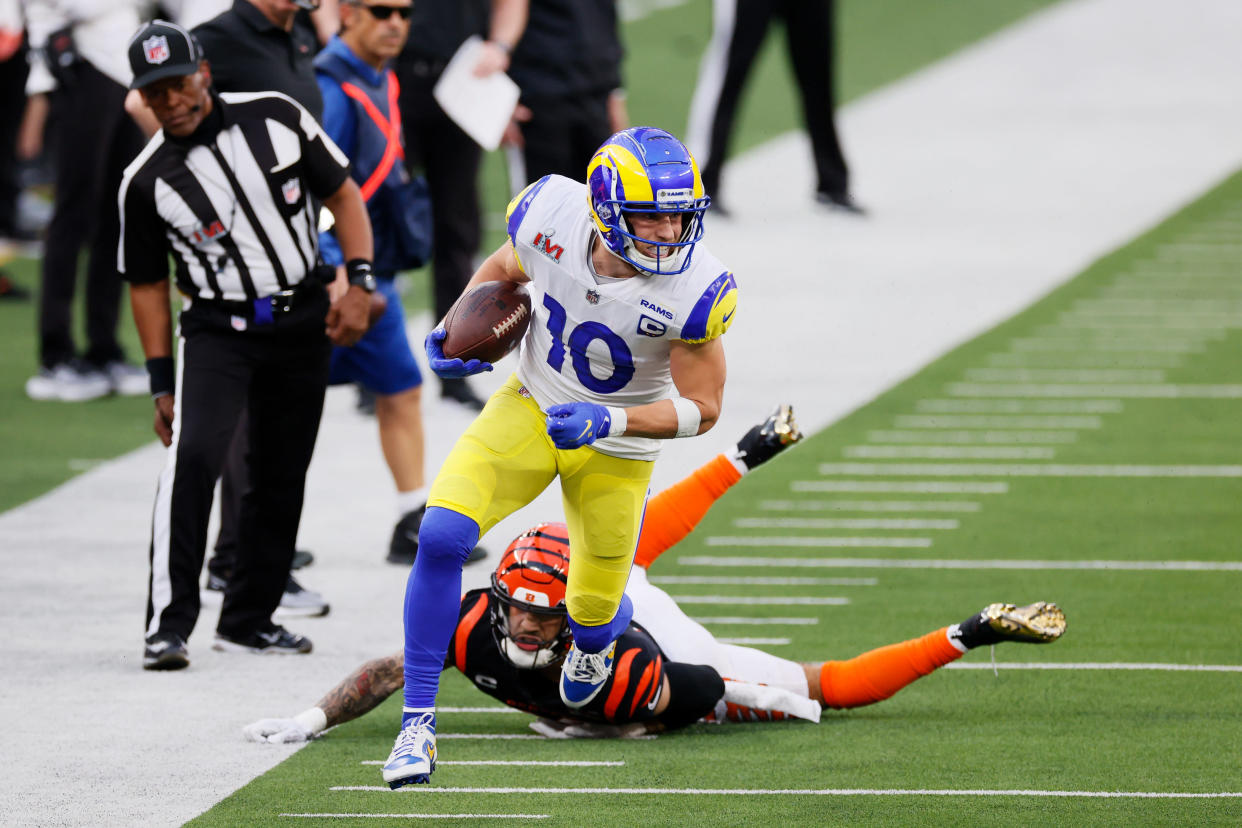 The Bengals defense played very well through three quarters. The Rams kept stubbornly trying to run the ball and had no success. Early in the fourth quarter the Rams' running backs had 23 yards on 16 attempts.

Without a viable running game and Beckham (and Tyler Higbee, who injured his knee in the NFC championship game, and Robert Woods, who tore his ACL in November), the Rams' offense didn't have many options. The Bengals defense has had its moments this season and it was good on Sunday against a banged-up Rams team.

The Rams defense kept the team in the game. The Rams had to take some chances and went for it on fourth-and-1 at their own 30 with about five minutes left. Kupp took an end around for 7 yards. That started a long drive that featured a lot of Kupp. For the first time since before Beckham's injury, the Bengals were back on their heels.

Two Bengals penalties against Kupp gave the Rams a chance to score, and on second-and-goal Stafford threw him the go-ahead touchdown with a little more than a minute to go. Donald finished it. His pressure on Burrow sealed a championship.

The Rams were full of stars. Their biggest ones came up when the Rams needed it most, and were the reason they won the Lombardi Trophy.

Wood Element Zodiac Sign: What does it mean in Chinese astrology?