For the first time in decades, a majority of Americans view health care quality as subpar, potentially a reflection of growing dissatisfaction with high costs and recent policy changes, new polling reveals.

Forty-eight percent of those surveyed said health care quality was “excellent” or “good,” while a slight majority, 52%, said it was “only fair” or “poor,” according to Gallup’s annual Health and Healthcare survey, which has been administered since 2001.

The poll of 1,020 adults was conducted Nov. 9-Dec. 2 with a margin of error of plus or minus 4 percentage points. 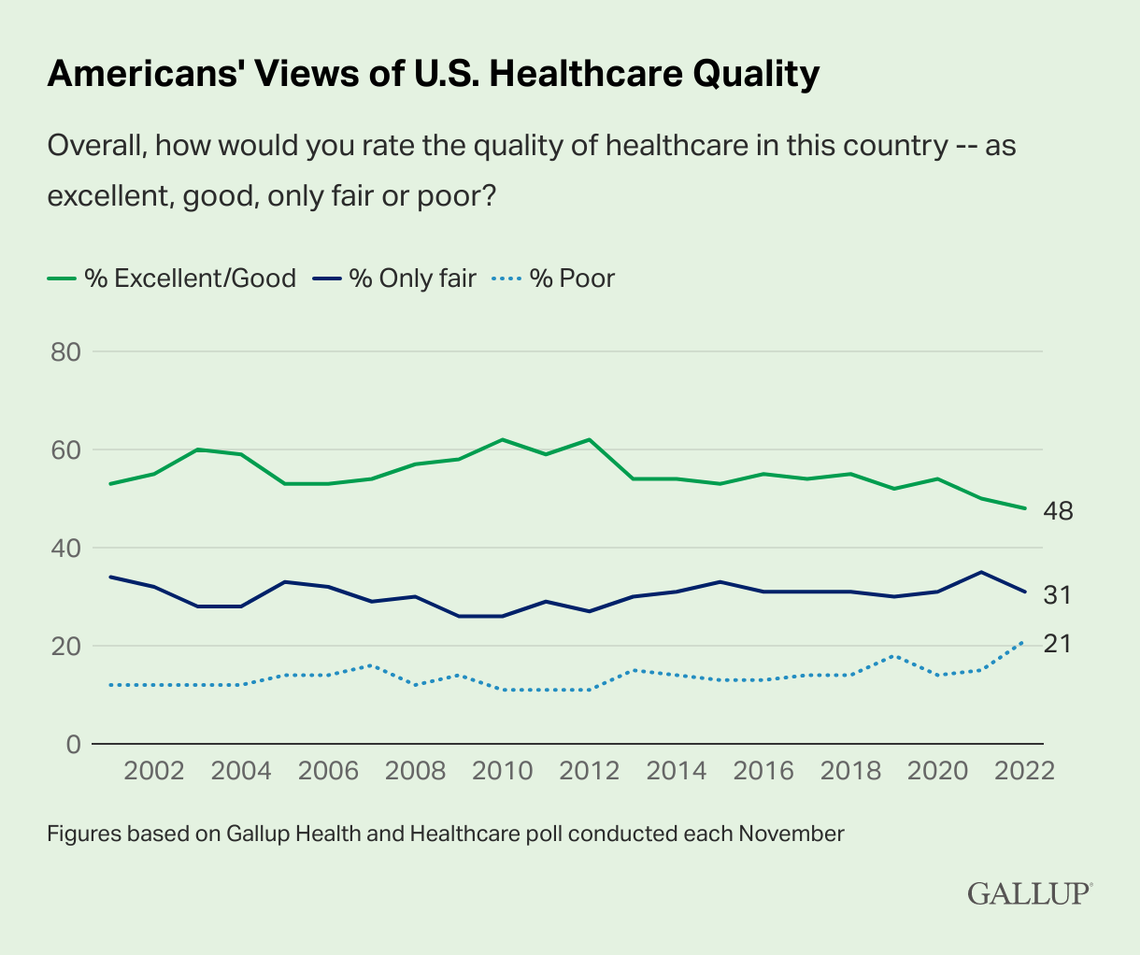 One factor contributing to the downward trend is Republicans’ souring opinion of the health care industry since Donald Trump left office, according to the poll. In 2019, 75% of GOP supporters rated health care quality as excellent or good, whereas in 2022, only 56% said the same.

Meanwhile, Democrats have held steady with their 44% satisfaction rating.

Young adults, too, have helped curtail positive ratings over the past year. It’s possible that policy decisions enacted during the COVID-19 pandemic or decreased access to abortion in the wake of the Supreme Court’s Dobbs decision factored into their dampened opinions, researchers said.

In addition to record-low ratings of health care quality in general, Americans’ assessment of their own personal health care is also at a low point. Seventy-two percent rated it as excellent or good, a decrease from the past several years.

This year’s decline is exclusively a product of young adult dissatisfaction, researchers said. Hardly half of those aged 18 to 34 are “upbeat about the quality of care they receive, versus 72% of those 35 to 54 and 85% of those 55 and older.”

Additionally, a paltry 24% of respondents were satisfied with the cost of health care, while 76% were dissatisfied.

A similar poll, conducted in 2016 by the Harvard T.H. Chan School of Public Health, found that while Americans were generally content with their health care, they encountered “significant problems with health care costs.”

Americans have long spent more for their health care than any other developed country, according to Johns Hopkins University research. Elevated drug prices, higher salaries and hospital administration costs are the main factors driving the above-average costs.

In a 2020 global survey of health care quality, Australia, the Netherlands and Great Britain received the highest ratings — all of them being over 74%, according to Ipsos. The United States placed sixth with 71% approval.

Man drives 4 miles without tires, then crashes into a car, Arizona police say

Grandfather arrested after 3-year-old is shot while playing with gun, Missouri cops say

Christina Applegate Shuts Down Hateful Commenter Who Said Plastic Surgery Changed Her Body, Not MS: ‘What Is Wrong With People?’