RNLI heroes face driving rain and rough seas in terrifying video as they rescue couple from £150,000 capsized yacht off Sandbanks in Storm Claudio

This is the moment a couple were rescued from treacherous conditions just off Sandbanks after their £150,000 yacht capsized in gale force winds as Storm Claudico hit in the early hours of Tuesday.

Volunteers from the Royal National Lifeboat Association (RNLI) in Swanage received a may-day call just before midnight, when 80mph gusts started blowing the vessel, named ‘Juno Lucina’, after it started to drag its anchor.

Footage from the rescue mission shows an RNLI volunteer throwing a rope to the man and woman, aged in their 40s, who were forced to abandon the yacht and get into their dingy tender and row 160ft in the dark towards the all-weather lifeboat after fearing it would sink.

In the video, the all-weather lifeboat approaches the couple in the dark, with just a spotlight to help find them as they are lashed with rain and the wind blows mercilessly around them.

In the background, the luxury yacht can be seen tipping to one side after its keel ran aground on a small sandbar just off Sandbanks in Dorset.

As the rescue team get closer to the couple, one RNLI volunteer can be seen throwing a rope out to them in a bid to get them to safety.

They couple were taken back to the Poole lifeboat station and given dry clothes by the rescue team, which was RNLI Swanage’s third in just two days.

RNLI coxswain Dave Turnbull at the Swanage lifeboat station, which attended the emergency, described the weather conditions as ‘awful’.

He said: ‘The owners of the vessel were sleeping and the first thing they knew about it was when the bottom of the boat hit the sandbar.

‘They called 999 as the as the vessel went aground and was listing heavily. The keel was above the side of the boat, meaning water was coming over and it could have sank

‘The Swanage lifeboat quickly arrived on scene. The wind was very strong – gusting over 70 knots.

‘As the yacht was hard aground the casualties used their dinghy to reach us.. We didn’t want to get too close in case we ran aground ourselves.

‘They drifted and sort of rowed 50 meters down to us. It wasn’t easy for them because of the wind.

‘We took them ashore and left the yacht in position. With the casualties safely ashore, the lifeboat was free to return to station in the early hours of the morning’. 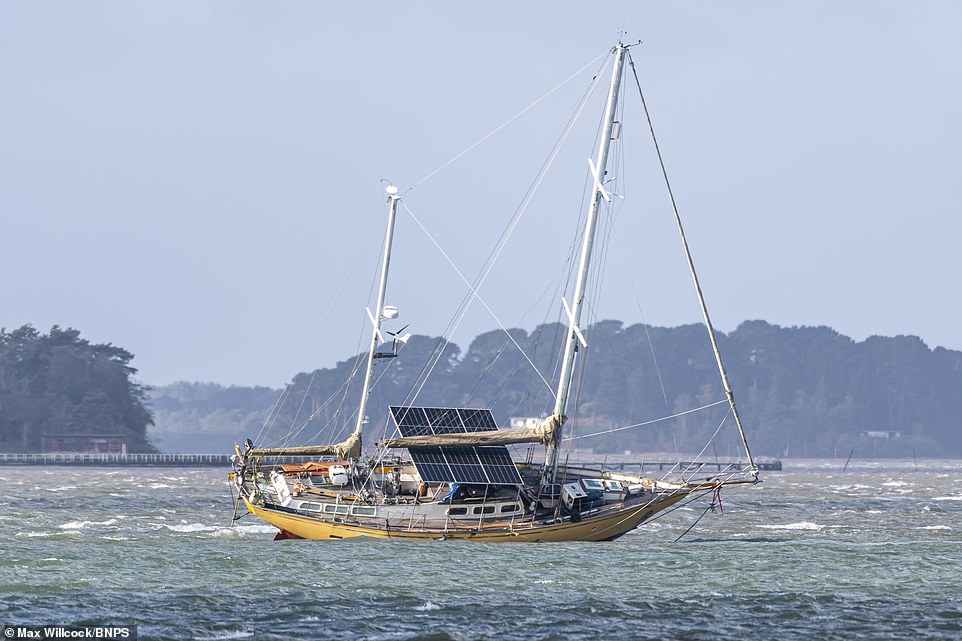 The £150,000 luxury yacht’s (pictured) keel ran aground on a small sandbar in Poole, Dorset, tipping it onto its side due to the 80mph winds brought by Storm Claudico 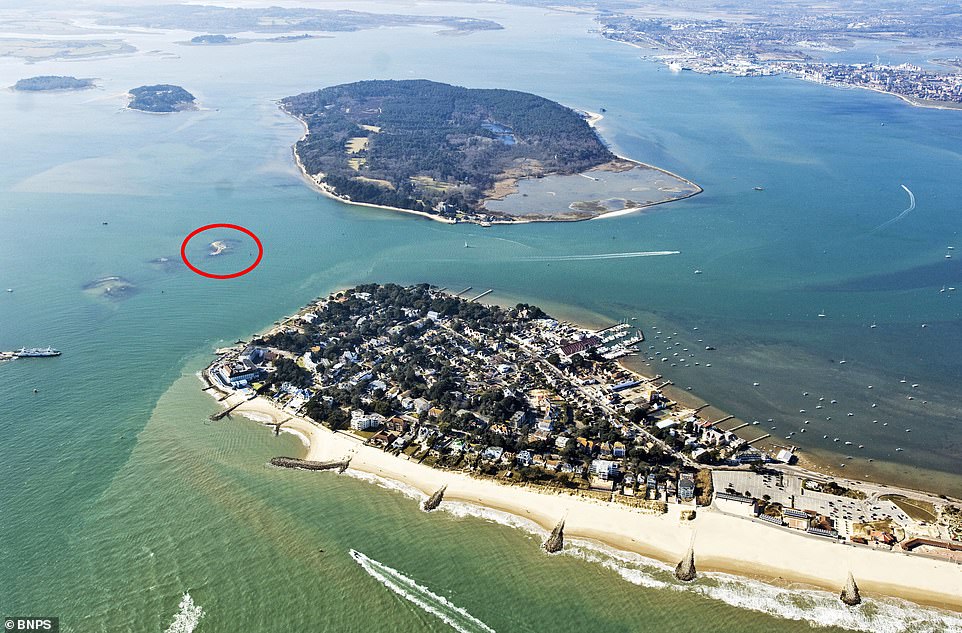 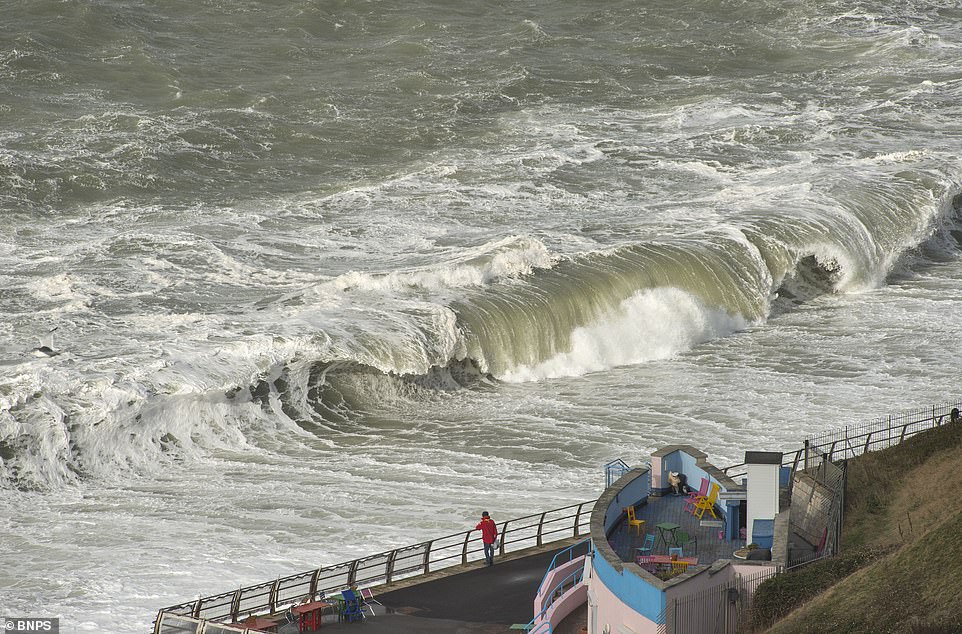 The waves at Chesil beach, Dorset, were high on Tuesday as Storm Claudio swept through the south of England, bringing with it strong gusts and torrential rain

Earlier that evening, eight people had to be airlifted to safety from a sailing boat off the Cornish coast on Monday in the ‘extremely rough and unpredictable’ weather.

It comes as wet and gusty conditions are expected to linger as much of the nation continues to feel the effects of Storm Claudio.

The French storm brought plenty of wind and rain for the UK on Tuesday as November got off to a blustery start, with the Met Office warning much of the same is forecast for Wednesday.

A yellow warning for rain is in place for southern Scotland from 10am until 6pm and Northern Ireland from 8am until 3pm.

Those affected are urged to be aware of potential travel disruption and flooding as a result of the forecast downpours. 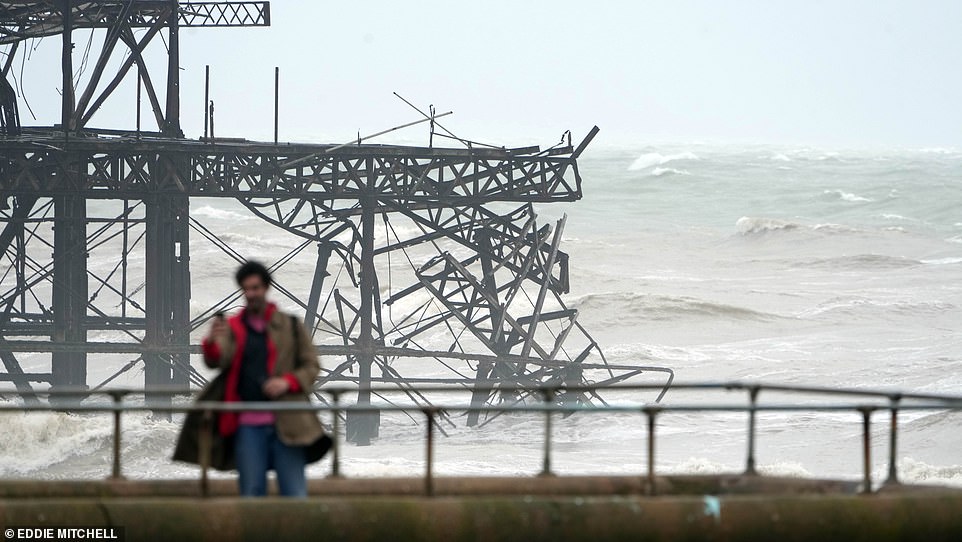 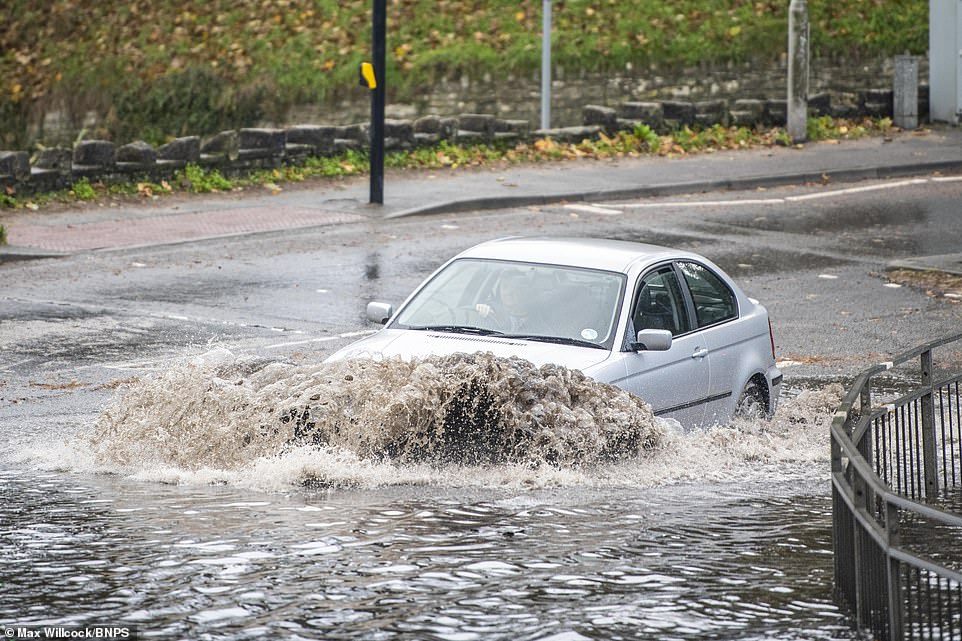 There are flood warnings in place for the River Trent and River Wye in Derbyshire, Upper River Derwent in Cumbria, River Esk in North Yorkshire and South East Somerset Rivers.

Chief meteorologist Neil Armstrong said: ’30 to 40mm of rain is expected to fall in some areas, and where it falls over ground already wet from recent rainfall as well as fallen leaves there may be spray and flooding on the roads as well as travel delays.’

Meanwhile, a yellow warning for wind will be active from 7am until 10pm, with the conditions expected to affect Irish Sea coastal areas early before spreading to parts of northern England.

The Met Office warns delays to road, rail, air and ferry transport are likely while short-term loss of power is also a possibility.

Mr Armstrong added: ‘Much of the UK can expect a spell of strong southerly winds on Wednesday, but the warning area highlights where gusts of up to 65mph will be and therefore where there are likely to be some travel delays.’ 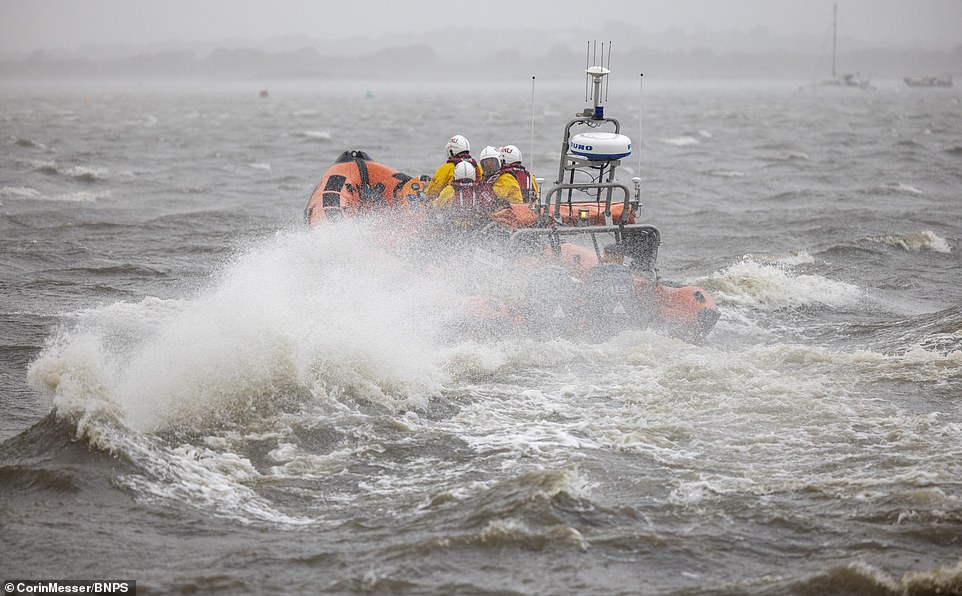 The RNLI has urged Britons to take extra caution by the coast today after Storm Claudio brought winds and torrential rain overnight. Pictured: The RNLI in Christchurch, Dorset, this morning. 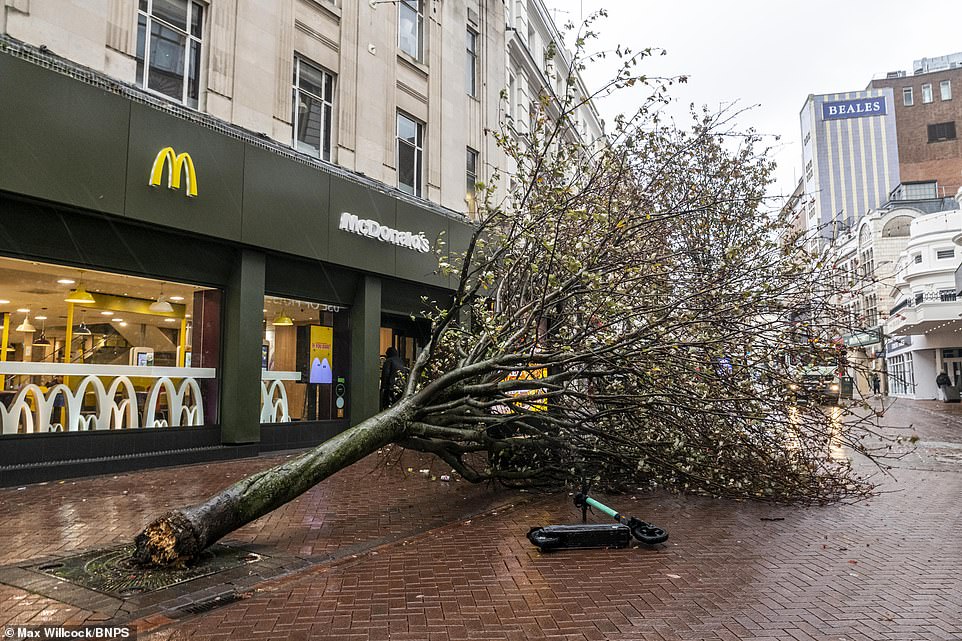 A fallen tree in Old Christchurch Road, Bournemouth town centre, Dorset, after Storm Claudio saw winds of up to 80mph sweep across the south coast 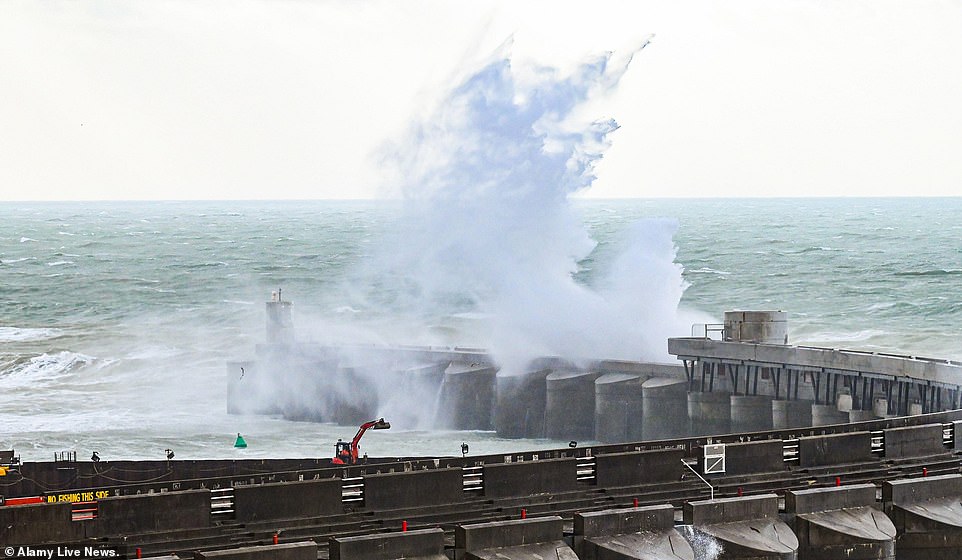 Yesterday, a section of Brighton’s iconic West Pier was destroyed during the storm. The pier, which now stands as a ruin after being closed to the public in 1975, has partially collapsed into the sea.

A pre-school in Devon was evacuated on Tuesday afternoon after a suspected lightning strike. Fire services were called out to Willand Pre-school at 2.20pm on Tuesday after a small fire was found in an office there.

A spokesperson for Devon and Somerset Fire and Rescue Service said: ‘We were called to Willand Pre-School at 2.20pm due to a loud bang, possible lightning strike and a smell of burning. Two crews attended and investigated the building.

‘There was a small fire in a first-floor office, out on our arrival, believed to have been caused by a lightning strike on an external telephone cable. The building was evacuated, no reports of injuries.’

The enormous baubles caused chaos amongst traffic with one appearing to blow into a moving car as the Met Office announced the arrival of Storm Claudio, which brought gales of up to 70mph in parts of the country.

They are reportedly part of an art installation by artist Tom Shannon which was due to remain on display in St Giles’ Square until Friday. 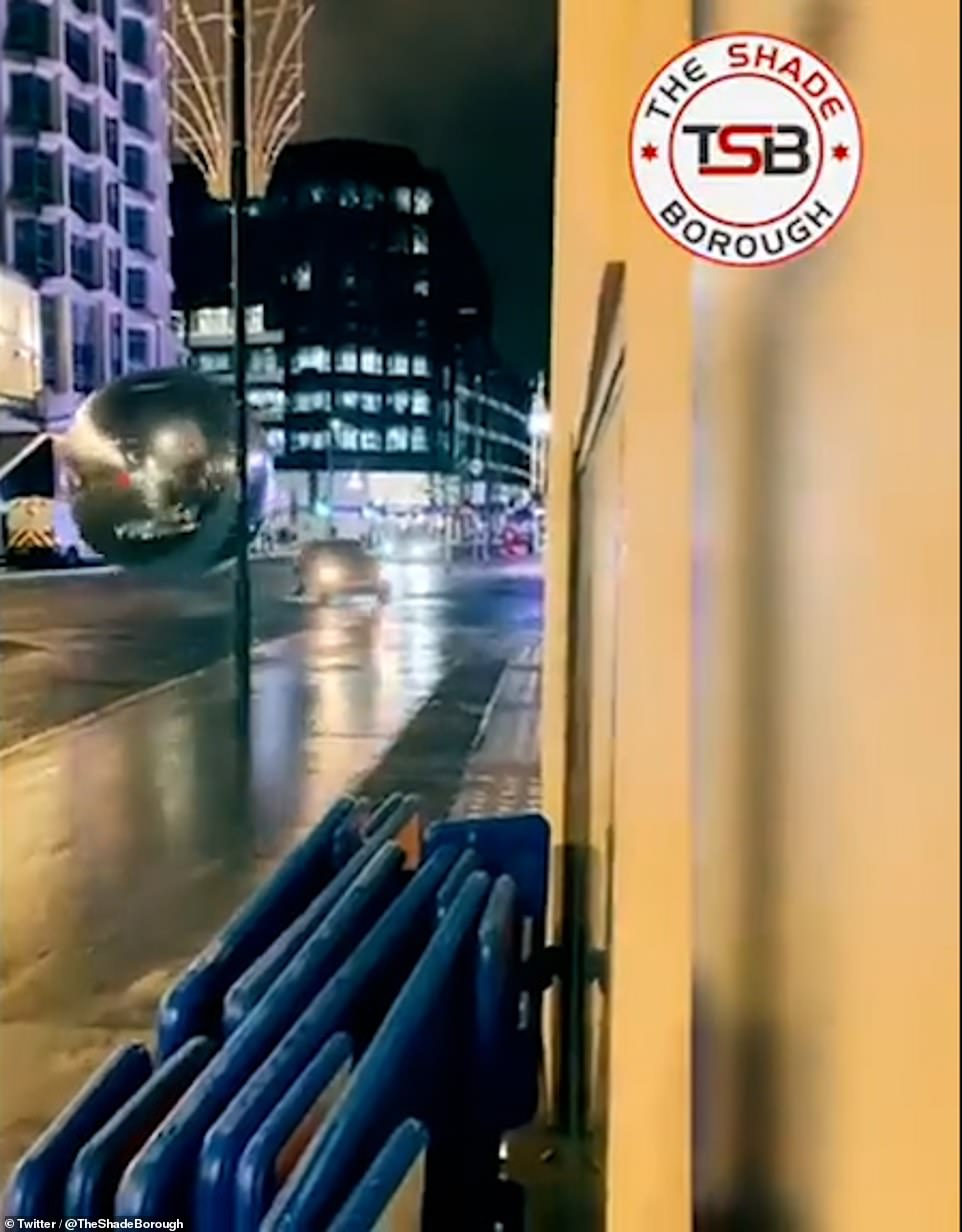 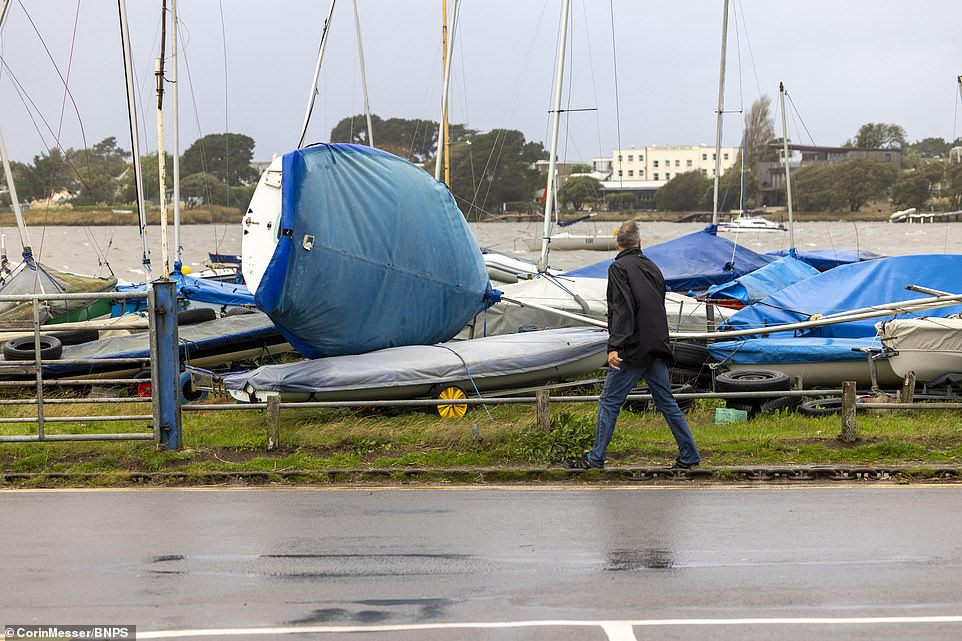 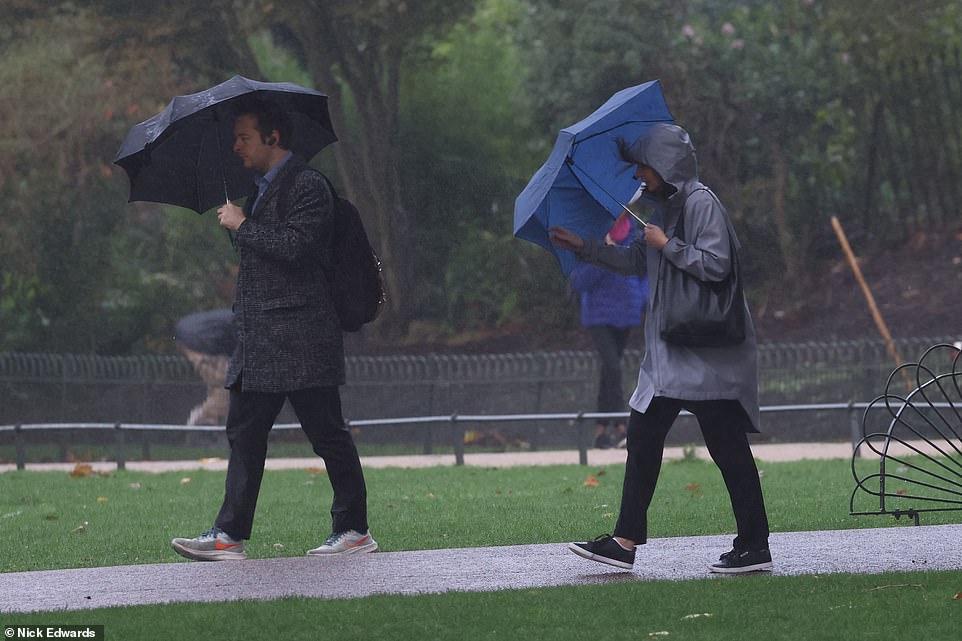 Commuters battled wind and rain on their way to work through the park in Westminster, central London, this morning

Christopher Nolans Oppenheimer teaser trailer: are you looking forward to this?