Beijing: The trade war between the Trump Administration and China has put robots in the cross hairs, giving a political edge to the World Robot Conference that opened in Beijing on Wednesday.

China's industrial robot output leapt by 68 per cent last year, boosted by the Chinese government's Made in China 2025 program which seeks to replace foreign technology with domestic brands in key sectors.

But this boom has seen robots become one of the first Chinese products slapped with US tariffs, as Washington complains of intellectual property theft and slams China's technology policy as inherently unfair to foreign companies.

Chinese investment in US technology companies will soon also face greater scrutiny under a new US law designed to stop China acquiring "dual use" technologies – a reference to military and civilian use. 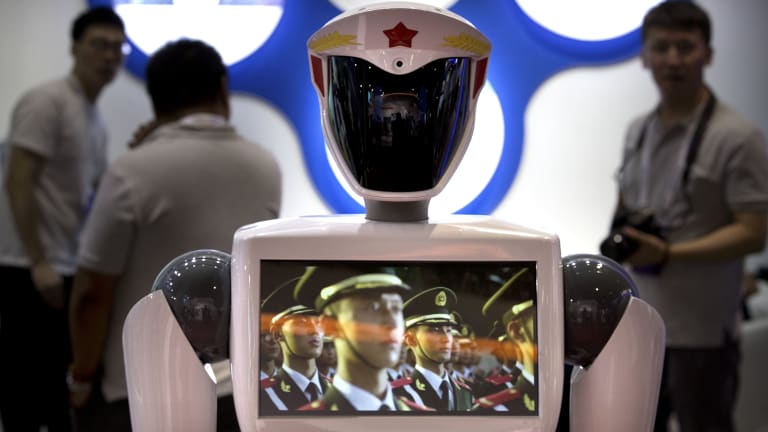 Speaking at the opening of the World Robot Conference, vice minister Liu He, China's point man on trade negotiations with Washington, warned the challenges posed to humans by the rise of robotics – which included ethical challenges – could not be solved by individual countries alone.

China hoped different political systems would "choose cooperation rather than pursue damaging unilateralism", he said, as a "global industrial chain of robots" had taken shape that relied on international collaboration.

In the future, robots would be "deeply integrated" with big data, artificial intelligence and the Internet of Things, he said. Already, industrial robots had moved from factory production lines to logistics warehouses, and service robots would be used by families, schools and were moving into shops, banks and hospitals. 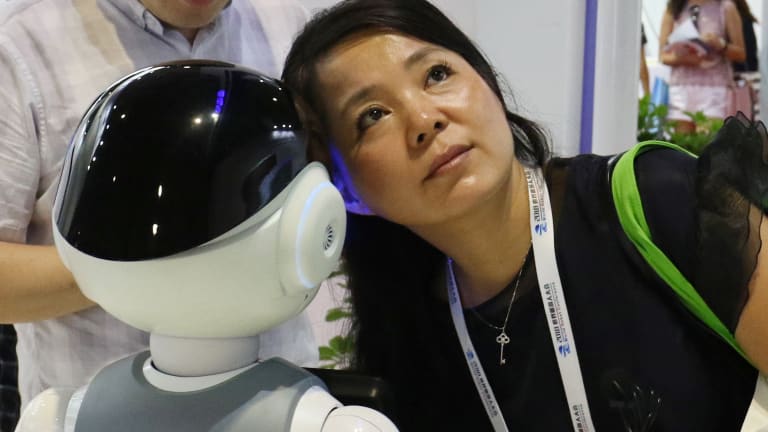 A woman listens to what a robot responds to her at the World Robot Conference.

Howover, China still faced a "considerable gap" with the world's most advanced robot makers, despite its rapid growth, and China recognised a "fair competitive market environment" was required for innovation in technology.

"We must unswervingly strengthen intellectual property protection and create better development conditions," he said, in an apparent response to US criticism.

China welcomed foreign investment in its robotic industry and would promote an "open environment", he pledged.

The takeover of German industrial robot maker Kuka by Chinese appliance maker Midea in 2016 sparked a debate in Germany over the national interest, and led to the widening of foreign investment screening. 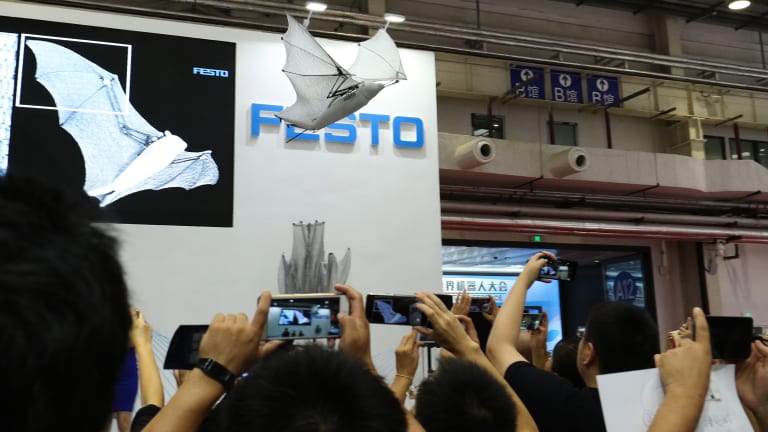 But German robot makers such as Festo, which displayed flying fox and butterfly robots at the conference, had a strong presence at the Beijing conference, reflecting China's position as the world's biggest robot market.

A large number of Japanese, Korean, and European companies also exhibited, as did iRobot, a US company, while American university MIT displayed its robot fish.

Nasdaq-listed company iRobot, which was founded by Australian robot scientist Rodney Brooks, told Chinese reporters it was concerned that US tariffs would disrupt the global supply chain for robotics. iRobot set up a research centre in Guangzhou two years ago, where it also manufactures.

The biggest booth was that of Chinese robot maker HIT Robot Group, which was established four years ago to commercialise the research of the Harbin Institute of Technology which has strong links to China's space program. 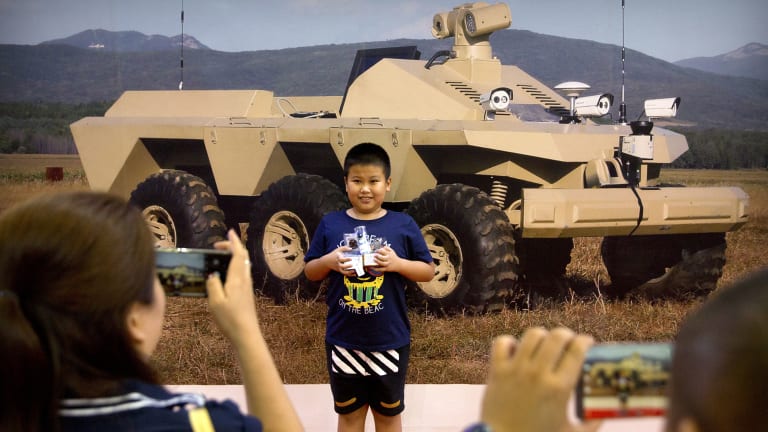 A boy poses for smartphone photos in front of a mural of a mobile tactical robot.

HIT robots span military and civilian uses, with robots on show ranging from a bar tender that could mix drinks, to a tank-like robot for military and security use that could "detect enemies" for soldiers and destroy explosives.

An aged care robot designed to work in nursing homes was separately developed by another Chinese company with Swiss and Swedish joint venture partners.

Dual-use technology was displayed by many Chinese robot firms, who said they had two major customers: the government for security and surveillance robots, and the commercial market which wanted robots for customer service, cleaning and logistics. 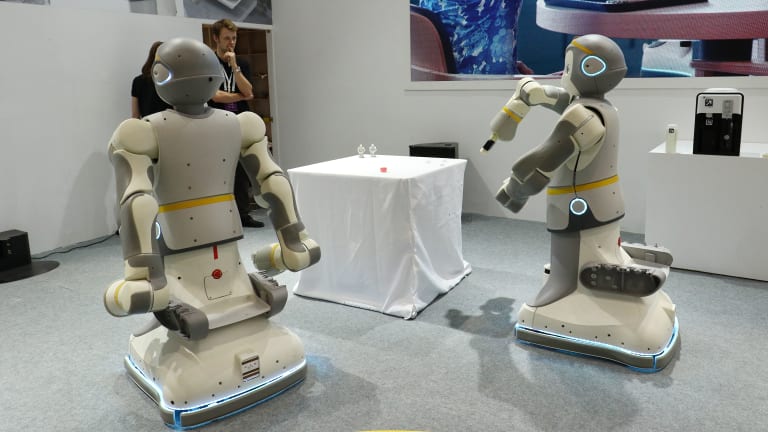 Helicopter drones designed for parcel delivery and monitoring power grids were the commercial version of a military use drone, and a police robot is being considered for surveillance use at Shanghai's Import Expo, which is expected to attract high security and large numbers of foreign ministers.

But it is the Chinese "dog" Laikago that is one of the stars of the Beijing robot show. The four-legged robot wowed the crowds as she was put through her paces, crawling under a table and galloping up a ramp.

The resemblance to the famous concept robots created by Boston Dynamics, a US pioneer in the field which designed dog robots for the US military, is no coincidence.

Boston Dynamics – which is not exhibiting in Beijing – is due to release its first robot for commercial sale next year, a small dog called Spotmini.

Laikago, named after the Russian stray who became the first animal in space, was unveiled to the world by Shanghai company Unitree in October. 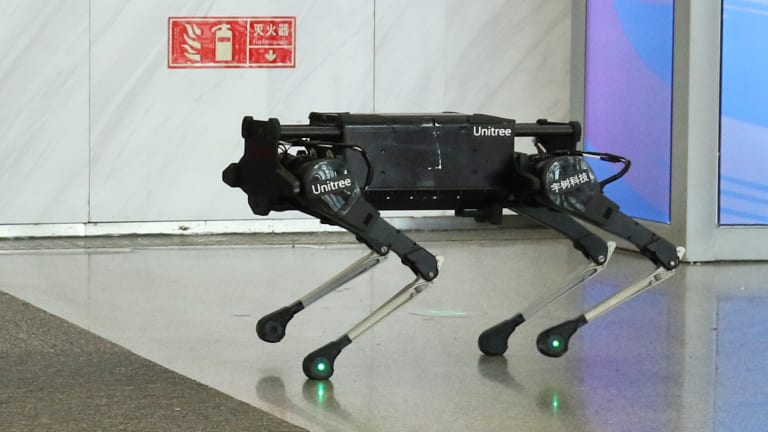 Xing Wang, the Shanghai graduate behind Unitree's robot dog,  told an industry magazine last year that Boston Dynamics founder Marc Raibert "is my idol". But Unitree has rejected accusations its dog was a copycat.

It would be sold for US$20,000 and could be used to deliver parcels.

A university student visiting the exhibition told Fairfax Media that many private or university-based Chinese robot developers had to rely on "improving features" in foreign robots because they were blocked from accessing the state secrets of Chinese government sponsored research.

Beijing announced on Thursday a delegation led by the vice minister of commerce Wang Shouwen would visit Washington for trade talks by the end of the month, an apparent step forward in the stalemate with the Trump Administration.

In a statement, China's commerce ministry said it will "not accept any unilateral trade restrictions" and wanted dialogue "on the basis of equity, equality and integrity".

iPhones with Fortnite installed are being listed for $10,000 on eBay

Should I Take Fish Oil?