Russian conscripts are resorting to ‘playing dead on the battlefield’ as they are sent to fight in Ukraine with poor equipment and insufficient training.

The wife of a Russian man sent to fight in Moscow’s 423rd Guards Motor Rifle Regiment said that her husband and his fellow conscripts pretended to be dead, as they only had machine guns to defend themselves.

He and others are facing court martial after leaving the frontline in Ukraine.

It comes as antidepressant sales in Russia skyrocketed as the miserable reality of Putin’s war in Ukraine finally dawns on the public, Western officials said.

Russians spent 70 per cent more on the pills in the first eight months of this year compared to last, even though they spent much of 2021 in Covid lockdowns, figures have shown.

‘Russians feel frightened’ as the ‘catastrophic error’ of Vladimir Putin’s invasion – including conscription and a tanking economy – begin to hit people’s lives, the officials added.

At least 400,000 have fled since Putin announced he would begin drafting people into the army in September, significantly more than the 300,000 he added to his ranks. 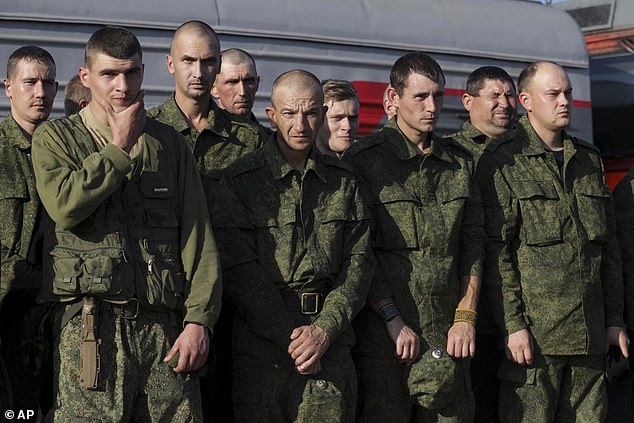 Russian conscripts are resorting to ‘playing dead on the battlefield’ as they are sent to fight in Ukraine with poor equipment and insufficient training. File image of Russian recruits 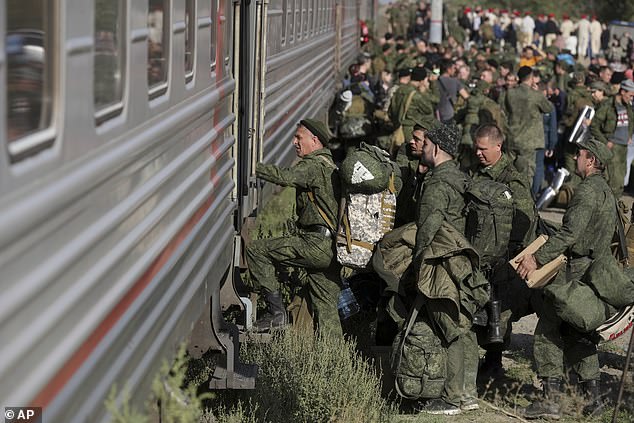 The wife of a Russian man sent to fight said that her husband and his fellow conscripts pretended to be dead, as they only had machine guns to defend themselves. File image of Russian recruits

Ekaterina said that her 27-year-old husband was trained in trench digging before being moved to the frontline.

She told independent Russian outlet Novaya Gazeta Europe: ‘For many hours they simply lay on the ground and pretended to be dead for one simple reason: they no longer had any weapons other than machine guns.

‘There were mortars against them, drones flew over them, if they even moved a finger, then a drone would immediately fly in and destroy them.’

Another wife, Irina, said that her husband, 24, was shelled for 12 hours, with one of his commanders ‘torn to pieces’ by the attack.

She told the Russian news site that the surviving commander ordered a retreat, before more senior military authorities sent them back to the front line.

‘After they refused to return, they were offered new equipment, bulletproof vests, helmets—or a court martial,’ the woman told the news outlet. 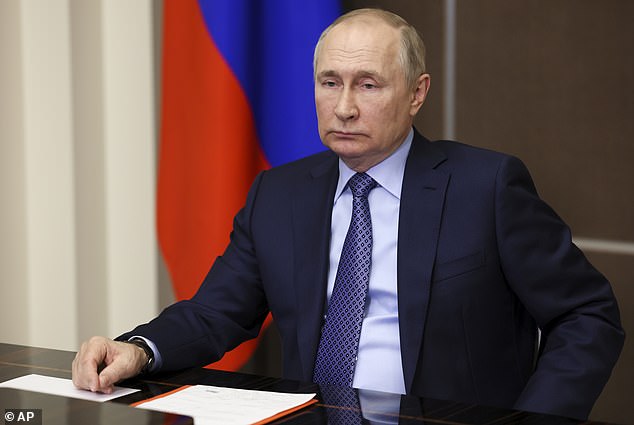 Vladimir Putin is facing increasing dissent at home as miserable reality of his war dawns on Russians but there is no prospect of him being replaced, Western officials have said 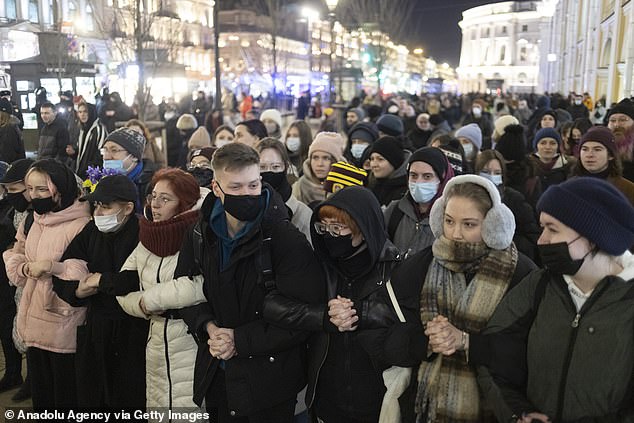 Mobilistion has proved particularly unpopular with some 400,000 Russians fleeing the country rather than sign up while mass protests also broke out (file image)

Ukraine will push Russia back to its pre-invasion border by the end of the year and retake Crimea next summer, a retired US general has predicted.

Ben Hodges, former commander of US forces in Europe, believes Ukraine is capable of re-taking thousands of square miles of territory in the south and east within the next two months before pushing into Crimea – the crown jewel of Putin’s 2014 war.

General Hodges, speaking in Westminster on Monday at an event hosted by the Council on Geostrategy, admitted his vision is ‘optimistic’ but confidently predicted that ‘Ukraine will win.’

Officials say there is no sign that Putin has decided to change course in Ukraine and no sign that anyone is preparing to replace him.

Russia is now into its ninth month of fighting in Ukraine and has failed to achieve any of the military objectives set by Putin at the start of the war.

The Kremlin thought it was getting involved in an easy conflict that would take days to resolve and had ‘no Plan B’ for what to do if the war went awry, officials said.

‘They still don’t have Plan B,’ the officials added.

That has led to growing dissent both within the Russian population and the elite close to Putin, who are increasingly willing to voice that discontent in public.

Russians are not in favour of the war, the officials said, and elites are increasingly worried about the cost to their businesses and also the prospect that their children may be called to fight on the frontlines.

That has led to the likes of Yevgeny Prigozhin, the Wagner boss dubbed ‘Putin’s chef’, to publicly criticise the way the war is being run – though not Putin himself.

Officials added there is ‘no likely prospect of a change of leadership’ in Russia in the near-term – though did flag elections due in 2024 as a moment of likely tension.

‘He has been weakened by this really catastrophic error,’ said the Western official, who spoke on condition of anonymity.

‘We are seeing the Russian military humbled on the battlefield by Ukraine. People can see that he has made a big error,’ said the same official.

In an attempt to distract from his own failures, the officials said that Putin is making increasingly wild and baseless claims as a way of diverting attention.

They picked out threats of a ‘dirty bomb’, allegations that the UK and US attacked the Nord Stream pipes, and claims about Liz Truss’s hacked phones as examples.

Russia is also increasingly relying on missiles strikes on Ukraine’s power grid, water supplies and cities as a means of breaking Ukrainian support for the conflict.

But, if anything, it appears to have strengthened their resolve, the officials said. 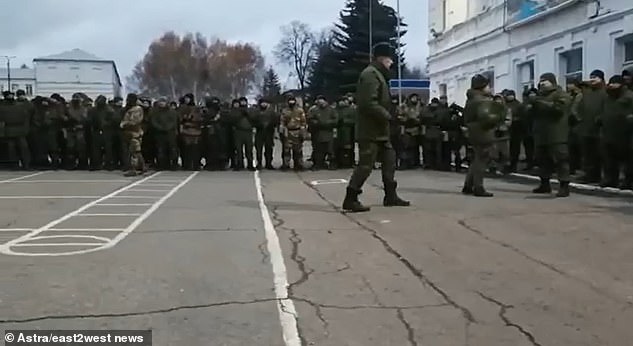 The money was meant to go to their families in the impoverished Chuvashia region. ‘It’s clear – we were f***ing fooled,’ said one mutineer as the female officer tries to address their concerns

They also revealed that ‘frequent’ conversations are taking place with Russian counterparts about ‘serious’ peace talks, though there is no sign of that yet.

Moscow is facing a dire situation on the battlefields of Ukraine as it attempts to defend a frontline hundreds of miles long with badly mauled units as winter hits.

Kyiv has taken advantage of that fact by launching counter-attacks in the north and south which have recaptured swathes of territory.

Troops continue to make plodding advances towards the city of Kherson and into Luhansk oblast, in the northwest, amid the hope of another breakthrough.

But as the ground softens through autumn those are expected to slow, while vehicles getting bogged down in mud.

Winter – which is bitterly cold in Ukraine – is expected to bring a near-total halt to advances as both sides dig in, before renewed fighting in spring.

During that time, hundreds of thousands of Russian conscripts are expected to arrive in Ukraine to plug holes in the defensive line and perhaps to carry out attacks when the conditions improve.

However, it remains vanishingly unlikely that Putin will be able to achieve his initial aim of toppling the government – and even the reduced aim of ‘liberating’ the Donbas region looks unlikely.

From the Archives, 1916: Anzacs victorious in the Battle of Magdhaba

'Grey's Anatomy': The Last Thing Alex Karev Did Before His Departure Proves What Jo Worried About All Along Was True