Khimki, Russia: A Russian court on Thursday found US basketball star Brittney Griner guilty of deliberately bringing cannabis-infused vape cartridges into Russia after the athlete said she had made an honest mistake by packing them.

Her sentencing, which is set to take place later on Thursday, could pave the way for a high-profile prisoner swap between Russia and the United States that would include the 31-year-old athlete and an imprisoned Russian who was once a prolific arms dealer. 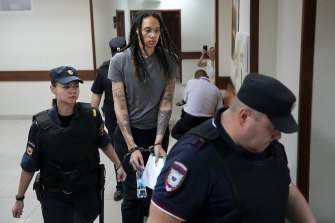 WNBA star and two-time Olympic gold medallist Brittney Griner is led into court in Khimki, just outside Moscow, on Thursday.Credit:AP

Griner pleaded with a Russian judge not to “end her life” with a harsh prison sentence for bringing in vape cartridges containing hashish oil.

The Russian prosecutor called for Griner, a two-time Olympic gold medallist and a WNBA star, to be sentenced to 9½ years’ prison for bringing illegal drugs to Russia.

Griner was detained at Moscow’s Sheremetyevo airport on February 17. She pleaded guilty but said she had neither intended to bring a banned substance to Russia nor to hurt anybody.

In a teary statement before the verdict, Griner implored the judge to recognise her actions as a mistake. 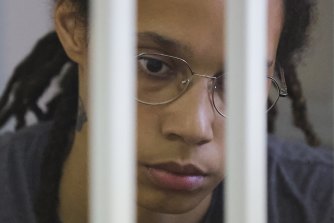 “I made an honest mistake and I hope that in your ruling, that it doesn’t end my life here,” Griner said.

The vape cartridges threw the Texan athlete into the geopolitical maelstrom triggered when Russian President Vladimir Putin sent troops into Ukraine on February 24.

During the most strained US-Russian relations since the 1962 Cuban missile crisis, US President Joe Biden is under pressure to intervene on behalf of Americans held in Russia.

The United States has said Griner was wrongfully detained and offered to exchange Russian prisoners for American citizens, including Griner and former marine Paul Whelan.

Russian officials have said a deal has not been reached. They argue that Griner, known as “BG” to basketball fans, violated laws and should be judged accordingly.

Rosalia Moves to the Head of the Class With the Dazzling ‘Motomami’: Album Review