Temperatures soar to 40C as heatwave brings Britain to a standstill: London could hit a record 104F next week as schools close early and Hammersmith Bridge is wrapped in foil to stop it overheating

Schools are preparing to send pupils home early, scrapping PE lessons and banning children from playing outside in a series of measures being considered as the country braces for record-breaking temperatures next week.

Students at three primary schools in Herefordshire have already been told they will not be allowed to play outside and PE lessons will not take place after the Met Office issued an amber warning for heat that could pose ‘a danger to life’ from Sunday.

The Hereford Academy in Herefordshire has announced an earlier start and finish to the school day to try and beat the worst of the heat.

A message on its Facebook page read: ‘Due to the high temperatures due to hit next week, we will have an earlier condensed format for our final four days: Finishing earlier but starting earlier thus being away for the hottest part of the day.’

Elsewhere in the same county, a letter to parents of children at Marlbrook, Little Dewchurch and St Partin’s Primary School warned PE lessons will be scrapped and pupils won’t be allowed outside to play.

It added: ‘We are also giving parents the option to keep children at home on Monday.’

Meanwhile, Crestwood Community School in Eastleigh, Hampshire, said it was cancelling its sports day as ‘we do not feel that it is safe for students to be out in the heat all day, taking part in physical activity.’ 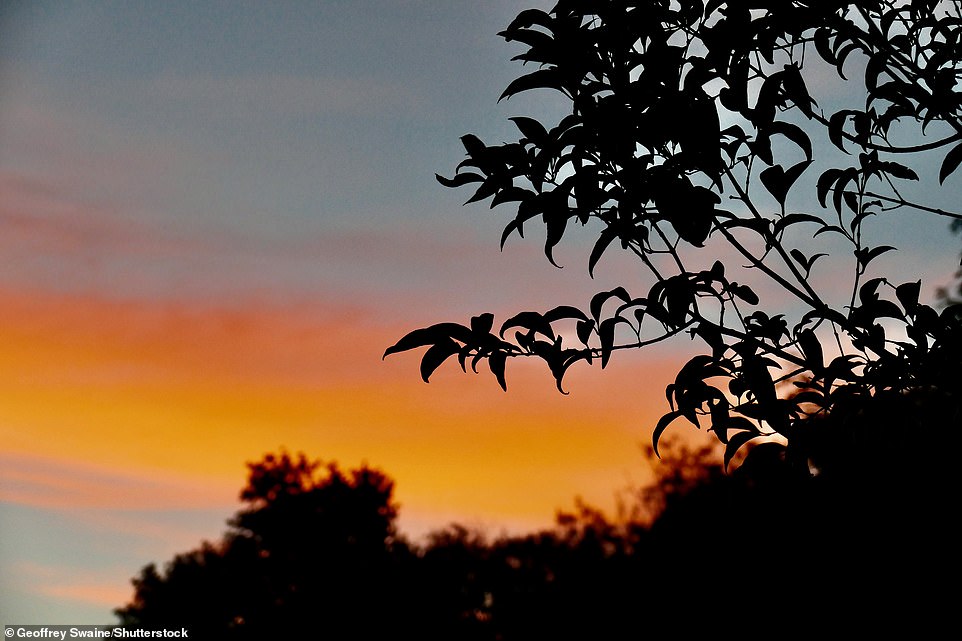 Schools are preparing to send pupils home early, scrapping PE lessons and banning children from playing outside in a series of measures being considered as the country braces for record-breaking temperatures next week 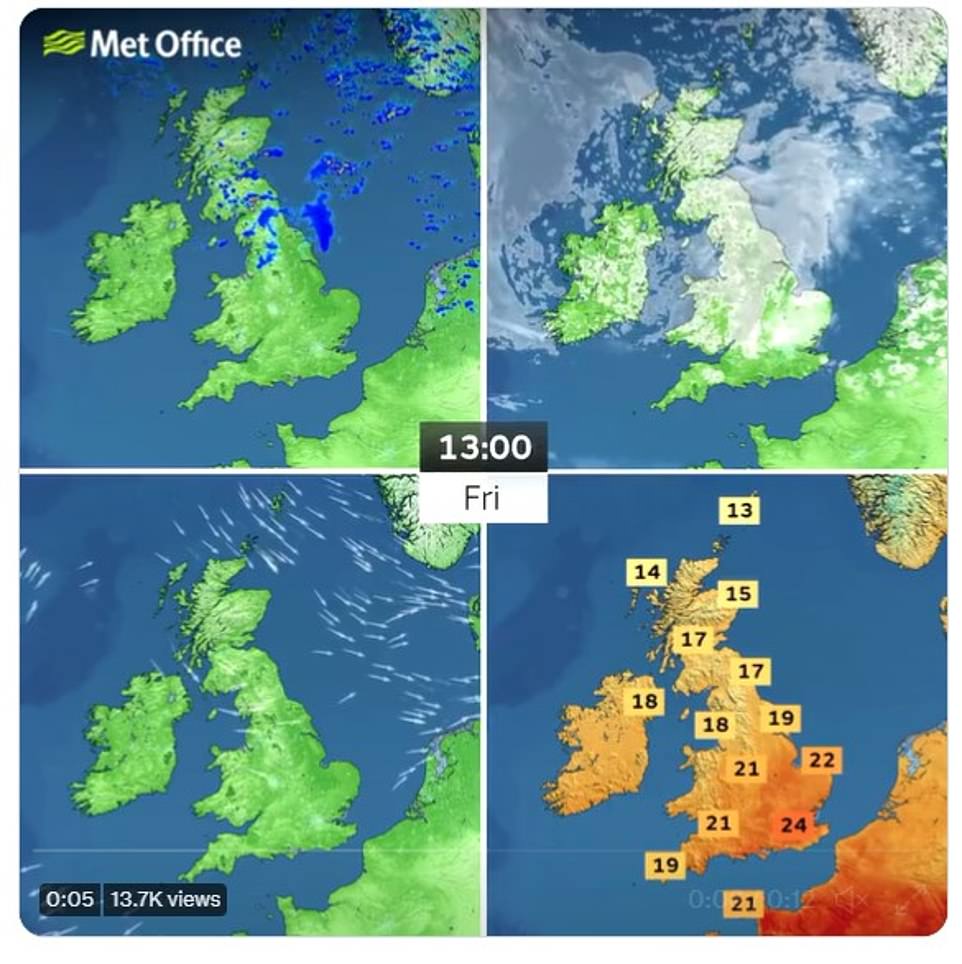 And in east London, the head teacher of Clapton Girls’ Academy warned of an early finish amid fears the school’s facilities won’t be able to cope with the soaring temperatures.

Anna Feltham told parents: ‘Already, many classrooms are very hot, even with fans, and students are struggling to keep cool, drink enough water and maintain concentration in lessons.

‘Next week’s heatwave will make many teaching rooms unbearably hot by lesson 4 and 5. We have reviewed a number of options but do not have sufficient ‘cool’ rooms to re-room lessons into.’

Schools are also encouraging pupils to wear t-shirt and shorts and offering the chance for parents to keep their children home altogether.

Meanwhile, health chiefs fear the NHS will be overwhelmed by a number of heat-related casualties if the mercury does indeed rise to levels only usually seen in Death Valley in California, the world’s hottest place.

The Met Office warning says the weather could cause health problems across the population, not just among people vulnerable to extreme heat, leading to potentially serious illness or danger to life.

Climate change lecturer John Grant told the Mirror: ‘I think hundreds are going to die in the UK if not ­thousands, that’s my fear if we hit temperatures of 40C.

‘It’s terrifying what will happen if we don’t have a management plan and get cooling centres ready.’ 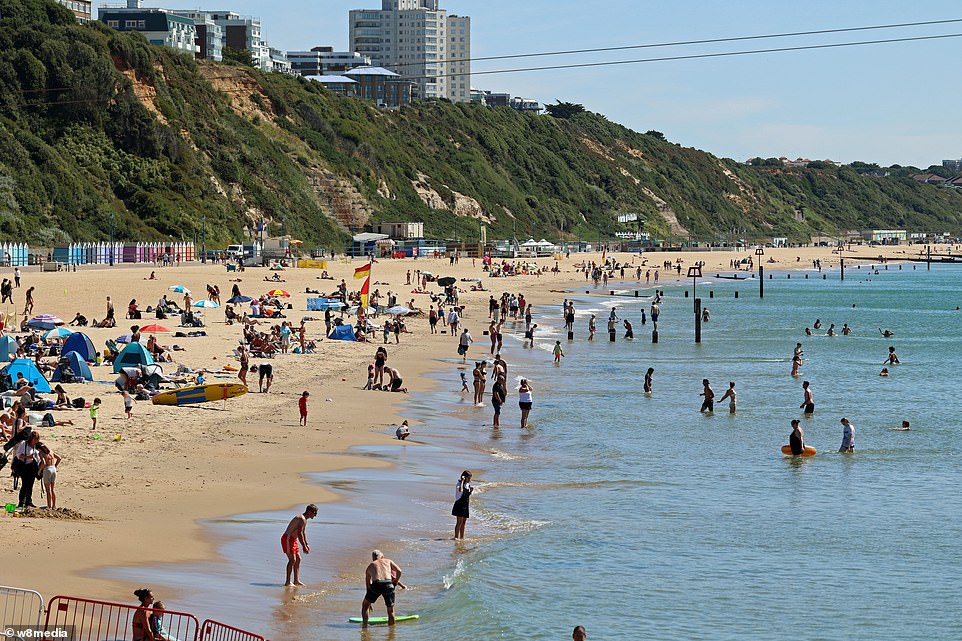 Experts have issued a ‘danger to life’ warning over the heatwave hitting Britain – with temperatures potentially rising to a record 40C. Pictured: Bournemouth beach 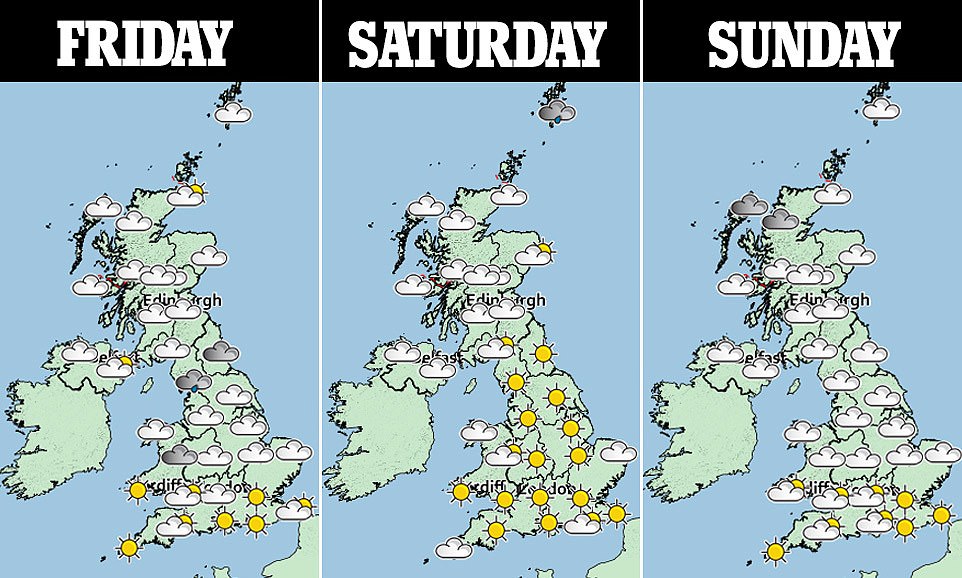 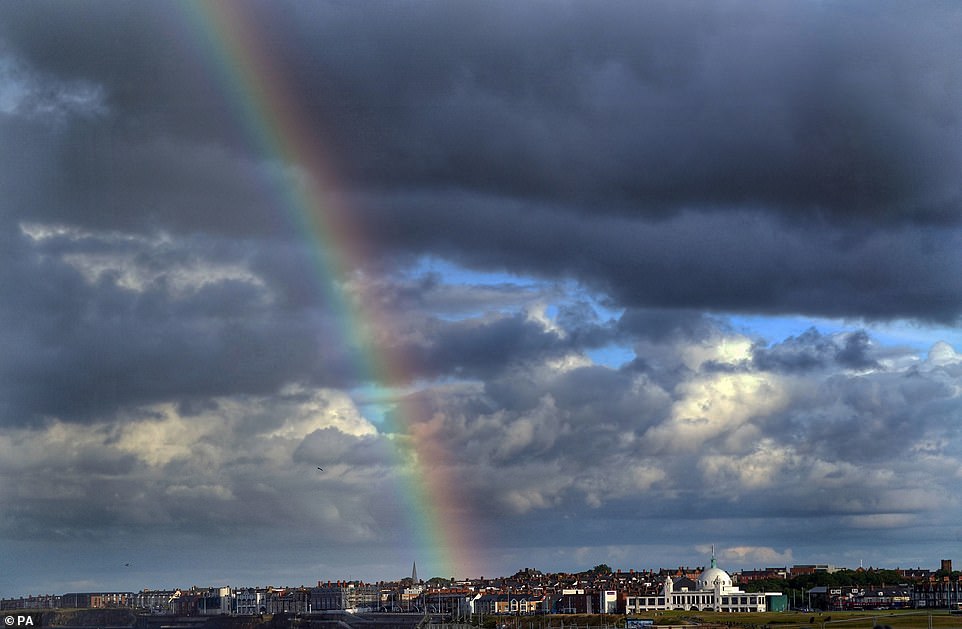 A rainbow over Spanish City in Whitley Bay in North Tyneside, Tyne and Wear on Thursday amid the current heatwave 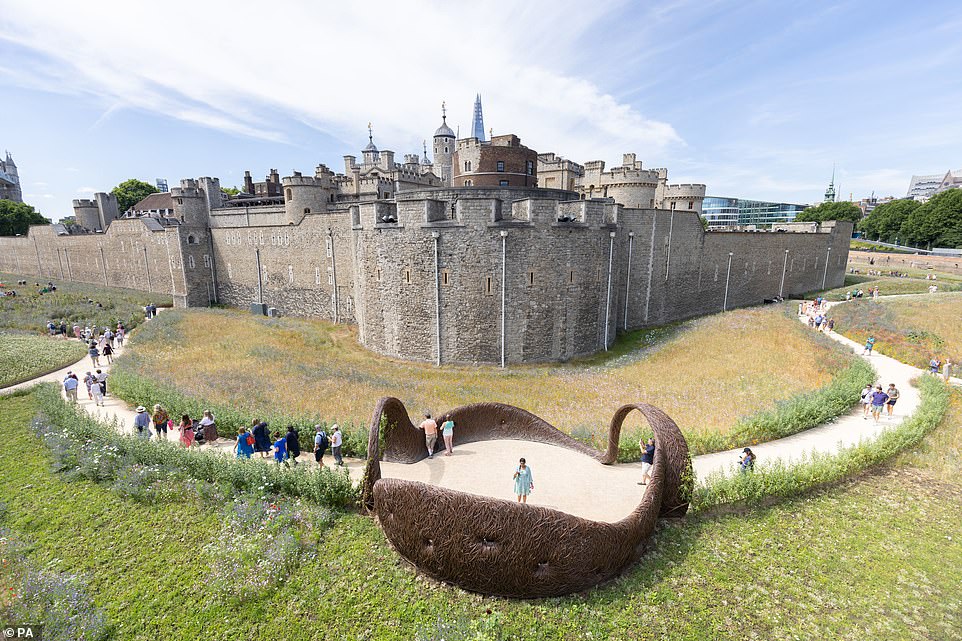 People walk amongst the flower meadows, around the Tower of London, central London on Thursday afternoon 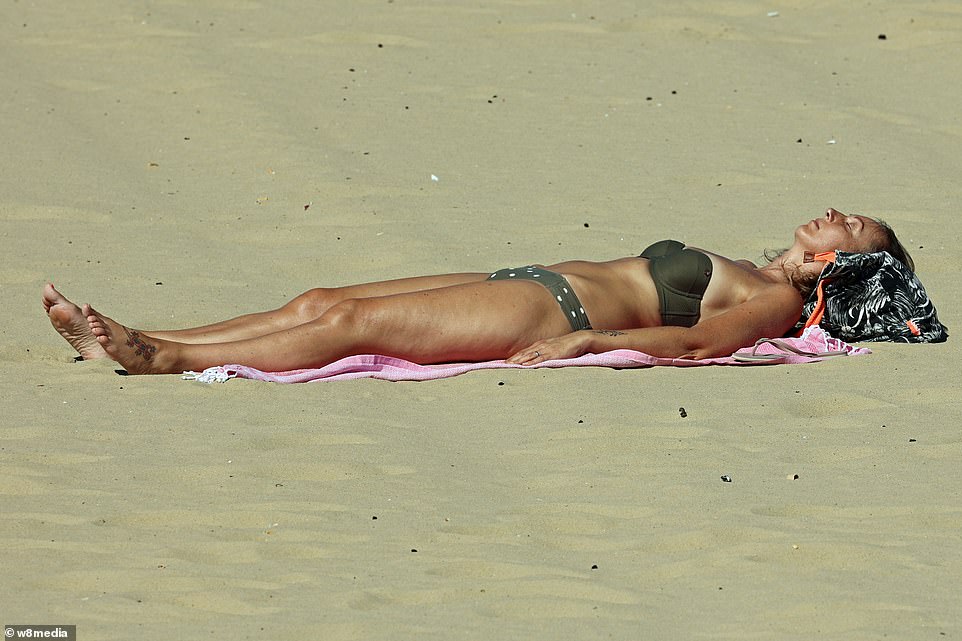 Tuesday is likely to be the hottest day, with the potential to top the UK record temperature of 38.7C (101.7F) set in Cambridge in 2019, forecasters said. Pictured: A woman on Bournemouth beach

Tuesday is likely to be the hottest day, with the potential to top the UK record temperature of 38.7C (101.7F) set in Cambridge in 2019, forecasters said.

Friday will begin with outbreaks of showery rain moving south-east across northern and central areas of the UK.

Meanwhile, people in the South and South West can expect warm sunshine.

London is forecast to experience 26C on Friday, while 23C is predicted for Cardiff, 20C in Belfast and 19C in Edinburgh.

Saturday is also set to start with overcast skies and scattered showers in northern areas, before turning dry across the nation as the extreme heat moves in.

During the peak of the heatwave on Tuesday, 36C is predicted in the capital, 28C in Cardiff, 26C in Belfast and 25C in Edinburgh.

Cabinet Office minister Kit Malthouse has said the Government is preparing for a ‘surge’ in demand on the NHS and other services due to the expected heatwave.

After chairing a meeting of the Cobra civil contingencies committee in Whitehall, Mr Malthouse urged the public to look out for people who were particularly vulnerable in the heat.

Avanti West Coast has warned passengers who wish to use services between London Euston and Scotland to plan ahead due to the impact of the heat on rail lines.

The company said that weekend services may be cancelled at short notice while journeys on Monday and Tuesday will be subject to amended timetables.

Engineers in London are working to keep 135-year-old Hammersmith Bridge open during the extreme hot spell.

The historic Grade II listed bridge had to be fully closed in August 2020 when micro-fractures in its cast-iron pedestals widened during a heatwave.

Since then Hammersmith & Fulham Council engineers have installed a £420,000 ‘temperature control system’ to keep the bridge at a safe temperature and alleviate any stresses on the pedestals.

The successful operation of the system was a key factor in the decision by safety experts to allow the bridge to reopen to pedestrians, cyclists and river traffic last July. It effectively acts as a giant air conditioning unit on each of the four pedestal chains.

The chains, which are anchored to the river bed, are regulated to be kept under 13C in the summer. If any of them reach 18C, safety engineers will shut the bridge.

With the Met Office having issued an Amber Alert and temperatures predicted to hit 34C in the borough next Tuesday, engineers have been working on an extra package of measures to keep the bridge chains cool.

This includes running the cooling system throughout the night and wrapping the parts of the chains that are above the water level in silver insulation foil which reflects the sun.

‘The safety of the public is our first priority,’ said Sebastian Springer, Arcadis Project Manager on the bridge works.

‘The temperature control system allows us to track weather spikes and maintain a constant temperature. As we deal with the current extreme heat, we are also coming up with innovative solutions to keep the temperature within the threshold.’

Drivers with older cars have been warned to consider alternative methods of travelling during the extreme temperatures.

Edmund King, the organisation’s president, told the Telegraph: ‘People who’ve got an older car, maybe the air conditioning doesn’t work, maybe it hasn’t been serviced for a while – the likelihood of it overheating is higher.

‘The risks are things like melting roads, getting stuck in traffic and then having problems, but you can drive in these temperatures – but your car has got to be in good shape.

‘I would say as a general rule of thumb cars over 10 years old might be the ones with problems. Most cars within the last 10 years will probably have air conditioning, will probably be relatively reliable, as long as they’ve been looked after.’

He also encouraged people to leave early in the morning or later in the evening, particularly if travelling with children.

See What Tristan Thompson Did to Hecklers at His NBA Game