A small town in northern France has become ‘overwhelmed’ with illegal African migrants trying to get to Britain, residents say.

Several show up to 20 brazen migrants sprinting behind trucks as they drive along, open the back doors and pile in. 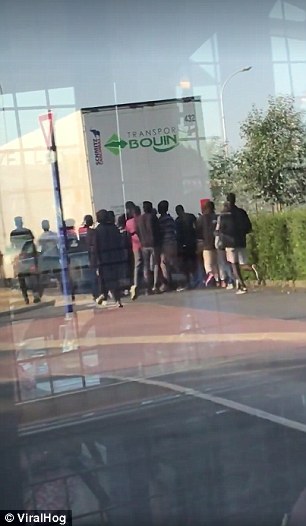 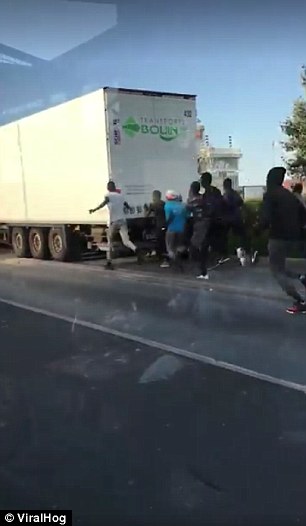 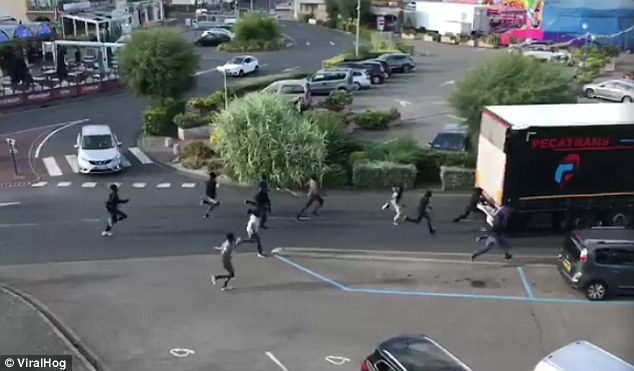 Footage shows up to 20 brazen migrants sprinting behind trucks as they drive along, open the back doors and pile in

The videos have been shared in local Facebook groups where angry viewers have demanded more be done to stop the migrants – while others say French authorities should let them leave.

One resident, author Sean O’Nuallain, said the town was ‘committing suicide’ by failing to crack down on the migrants.

And British lorry drivers have repeatedly complained, saying attempts to board their trucks put them in danger of breaking the law and sometimes in fear of their lives.

British trucker Sean Burke said a group migrants near Ouistreham tried to storm his truck on the way back to England.

He told MailOnline: ‘I was travelling to Portsmouth with a pilot car on the front and two gendarmes in a car behind my truck but the migrants still got on board.

‘They got on to my trailer and inside the machine I was transporting.’

He said the French police at the port were ‘very helpful’ and helped him get at least 10 people off his truck. 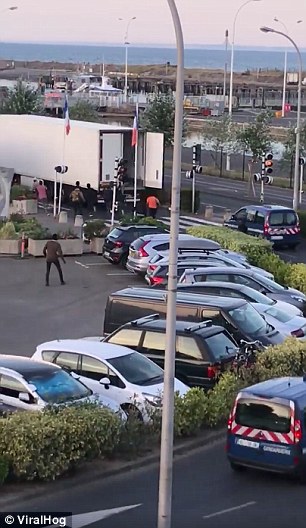 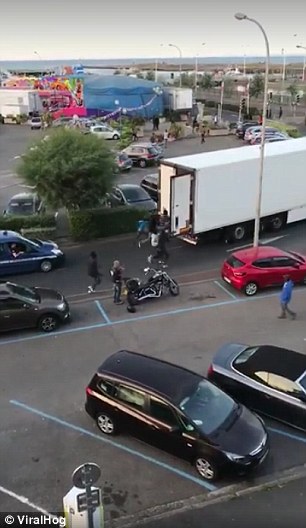 British lorry drivers repeatedly have complained about the problem, saying it puts them in danger of breaking the law and sometimes in fear of their lives One of the migrants spotted trying to board a lorry, Ahmad, said he was 17, from Sudan and had been living in nearby woodland for three months. Pictured: Migrants chase a lorry

One of the migrants spotted trying to board a lorry, Ahmad, said he was 17, from Sudan and had been living in nearby woodland for three months.

Explaining why he wanted a better life in Britain, he told The Sun Online: ‘It’s cold and difficult.

‘I won’t ever go back to Sudan – there are too many problems… there’s too much death.’

He said he landed in Italy three months ago and was desperate to get a job and start a new life.

The videos from Ouistreham are not the first to show migrants going to great lengths to move around Europe.

In July, astonishing footage emerged of around 50 migrants landing on a packed Spanish beach and sprinting up the sand as stunned tourists looked on. 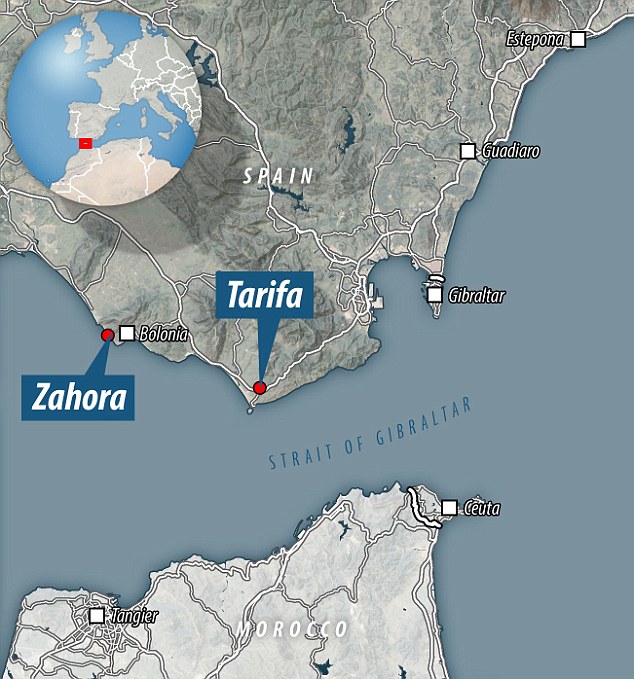 This latest incident took place at the town of Zahora in Cadiz, just 40 miles away from the scene of another beach invasion on Friday in Tarifa

Footage taken by holidaymakers and posted on Twitter showed the Africans jumping off their rickety wooden boat as it reaches the shoreline as a father on the beach moves his children out of the way and two men interrupt a game of beach tennis.

Other tourists strolling along the water’s edge as the cramped vessel reaches dry land can be seen breaking into a run to join crowds milling around a woman migrant who was injured in the mass arrival and is laid on her back on the sand.

The extraordinary scenes occurred at midday on Saturday at a beach in Zahora in the province of Cadiz, near to the headland of Cape Trafalgar close to where Horatio Nelson defeated Napoleon’s combined Spanish and French fleet.

It happened a day after dozens of migrants were filmed storming a beach in Tarifa further east, but at 1pm and on a beach which at the time was much busier with tourists and locals than the one in Tarifa.

Witnesses told how many of the migrants ended up asking beachgoers for food and water after distancing themselves from the boat they had arrived on, known as a patera in Spanish.

Migrant routes to Europe: What are the long and perilous routes thousands of people are taking?

Illegal migrants seeking to enter Europe use various long and perilous routes that are evolving as authorities attempt to stem the flow of new arrivals.

Here is an overview of how people are reaching the continent.

How do migrants reach Europe?

Most arrive by crossing the Mediterranean, according to the UN High Commissioner for Refugees (UNHCR), with 172,000 entering through Greece, Italy and Spain last year.

The number of arrivals is down sharply from the peak in 2015, when 1.02 million entered Europe via the Mediterranean. Maltese paramedics aid migrants on board the Lifeline NGO rescue vessel stranded in the Mediterranean with more than 200 migrants as it finally berthed in Valletta, Malta, on 27 June 2018

What are the routes across the Mediterranean?

Most of the crossings last year were from Libya or Tunisia into Italy, known as the ‘Central Mediterranean’ route, says the EU’s Frontex border agency.

It was used by 118,962 people, mostly Nigerians, Guineans and Ivorians.

But arrivals via this route have plunged 75 per cent since a controversial July 2017 deal between Rome and the Libyan coastguard.

Crossings have also dropped sharply from Turkey to Greece, the ‘Eastern Mediterranean’ route. After close to 900,000 migrants in 2015, Frontex recorded only 42,000 last year, essentially Afghans, Iraqis and Syrians.

The decline came after a 2016 deal between the EU and Turkey in which Ankara agreed to take back illegal migrants landing on Greek islands in exchange for billions of euros in aid and other incentives.

More recently there has been a sharp increase in the use of a route between Morocco and Spain.

The renewed popularity of the route is straining Spain’s law-enforcement response and its social safety networks.

Of the 972 who lost their lives at sea trying to make the crossing to Europe, nearly a third (292) died trying to reach Spain.

Other ways into Europe

The main secondary route into the EU is through the western Balkans into Eastern Europe.

But this path joins up with one used by migrants who have already passed through Turkey and Greece, meaning the actual numbers of new arrivals don’t always add up.

Routes into Europe are constantly evolving: according to the French embassy in Slovenia, a new one is developing from Greece through Albania, Croatia and Slovenia, with nearly 1,800 crossings between January and May this year.

An ‘Arctic route’ was briefly in operation 2015 when about 100 migrants crossed a day from Russia into Norway on bicycle.

There are also several routes from African countries to departure points on the Mediterranean, some involving a dangerous crossing of the Sahara desert.

A Somali leaving from Mogadishu, for example, could travel via Addis Ababa, Khartoum, Cairo and then Tripoli, ahead of the sea crossing to Europe.

An Ivorian leaving from Abidjan might pass via Ouagadougou, Niamey and Agadez – Niger’s renowned ‘gateway to the Sahara’ – to reach Libya.

To this should be added the toll for the perilous Sahara crossing, which the International Organization for Migration says is probably as high as that for the Mediterranean.

United for Intercultural Action, a Dutch group which records the identities of victims of the crossings, says at least 34,361 migrants have died trying to reach Europe since 1993.

‘Thousands of others have never been found,’ it says.

The Handmaid's Tale season 3: Release date, cast, spoilers and everything you need to know