Shops have spent up to £75 million on signs encouraging customers to remain two metres apart – which have now been rendered redundant after the rule was relaxed.

Now they face having to pay tens of millions more to replace them. 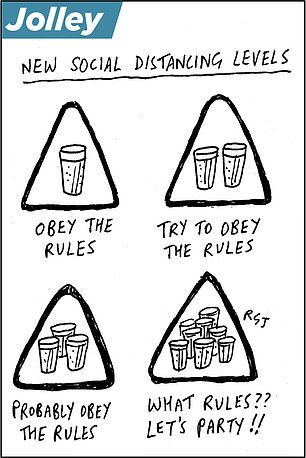 Non-essential stores in England were allowed to open on June 15 with the two-metre rule, but from next Saturday customers can be one metre apart if other measures, such as face masks, are in place.

Retail analyst Richard Hyman came up with the £75 million figure based on 300,000 non-essential stores each spending an average of £250 on signs.

The vast Meadowhall shopping centre, near Sheffield, said they alone had spent £30,000.

Supplier Astley Signs said that many retailers were now choosing ‘less specific’ messages such as ‘keep your distance’ to cover themselves in case of any future rule changes.

Empty £1 flat revealed as just a bricked up room

Where is the best bet for a foreign holiday this summer?