Afghan media reported a book exhibition was being held at the university and attended by a number of dignitaries at the time of the shooting. 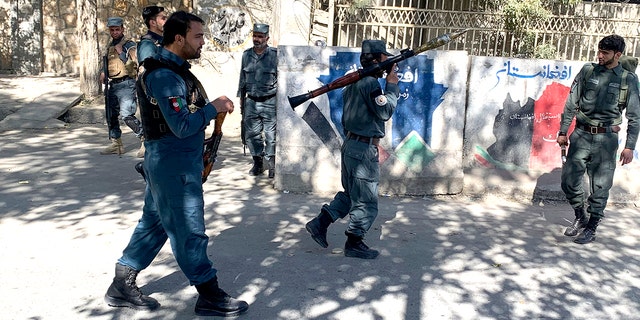 Afghan police arrive at the site of an attack at Kabul University in Kabul, Afghanistan, Monday, Nov. 2, 2020. Gunfire erupted at the university in the Afghan capital early Monday and police have surrounded the sprawling campus, authorities said. (AP Photo/Rahmat Gul)

Security forces blocked off roads leading to the campus as frantic families tried to reach their children at the university.

No group immediately took responsibility for the ongoing attack though the Taliban issued a statement saying they were not involved.

Last year, a bomb outside of the Kabul University campus’ gates killed eight people. In 2016, gunmen attacked the American University in Kabul, killing 13.

Last month, the Islamic State group sent a suicide bomber into an education center in the capital’s Shiite dominated neighborhood of Dasht-e-Barchi, killing 24 students and injuring more than 100. The Islamic State affiliate in Afghanistan has declared war on Afghanistan’s minority Shiite Muslims and have staged dozens of attacks since emerging in 2014.

Violence has been relentless in Afghanistan even as the Taliban and a government-appointed negotiation team discuss a peace agreement to end more than four decades of war in the country. The talks in Qatar have been painfully slow and despite repeated demands for a reduction in violence, the chaos has continued unabated.

LICK HERE TO GET THE FOX NEWS APP

A U.S. deal with the Taliban in February set the stage for peace talks currently underway in Doha. The deal also allows for the withdrawal of U.S. and NATO troops from Afghanistan.

Meanwhile Monday, a vehicle hit a roadside mine in the country's southern Helmand province, killing at least seven civilians, most of them women and children, provincial governor spokesman Omer Zwak said.

Who is Adam Henson? Countryfile host and Farming Today expert who runs his own farm in the Cotswolds

After everyone in Britain is vaccinated, let's go and save Europe