Thick fog blanketed much of Britain this morning and is set to continue into the afternoon for some areas, causing ‘hazardous driving conditions’ after temperatures plunged to -6C (21F) overnight.

The Met Office warned of disruption to flights, trains and bus services after it issued a 17-hour weather warning for fog which could freeze in some places, covering most of England and eastern Wales until midday today.

Temperatures were widely below 0C (32F) across England in particular at dawn today with the UK overnight low at Benson in Oxfordshire at -6.2C (20.9F), followed by Shawbury in Shropshire which fell to -5.2C (22.6F).

It comes after a bright night thanks to the Wolf Moon which peaked just before midnight and will be visible until tomorrow morning – the first of 12 full moons in 2022 that include the Worm Moon, Pink Moon and Beaver Moon.

The Wolf Moon was named after wolf packs often heard howling outside North American villages in the depths of winter, according to the Farmer’s Almanac, a US periodical which first published moon names in the 1930s. 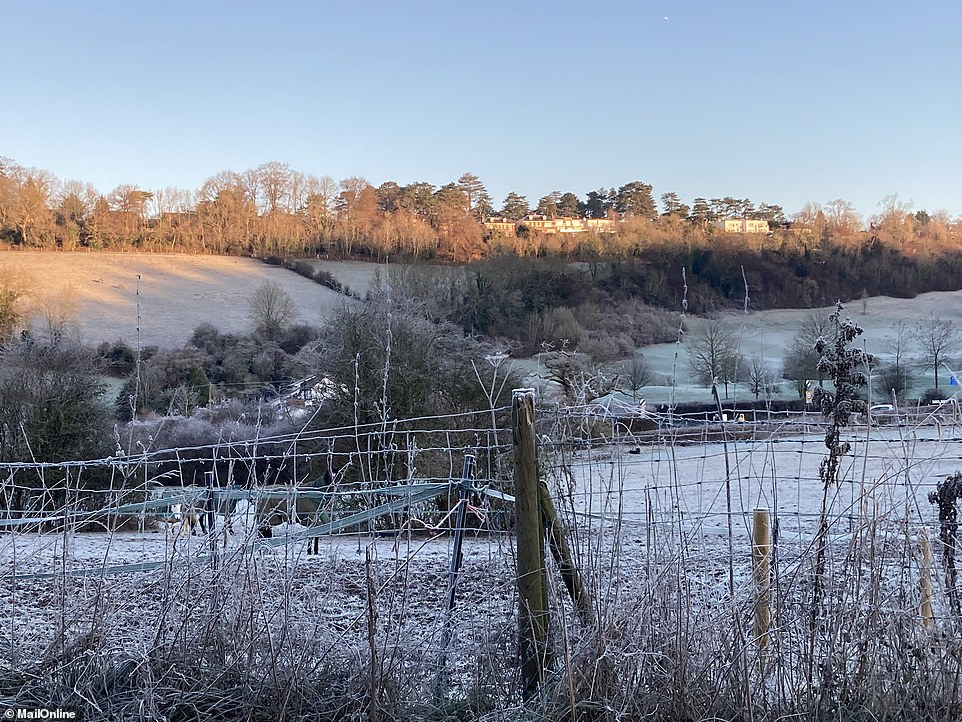 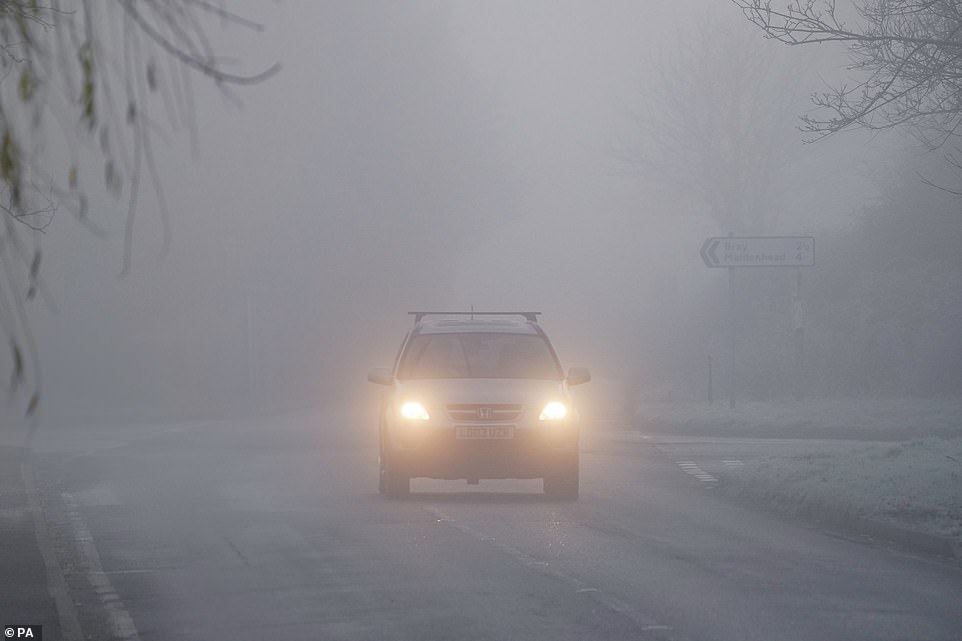 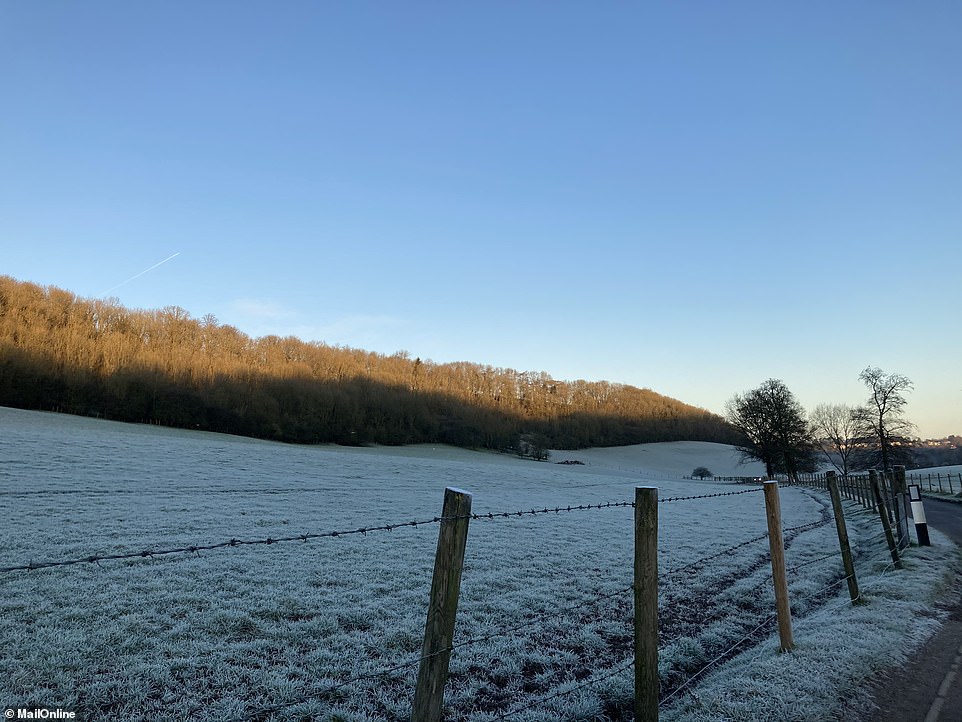 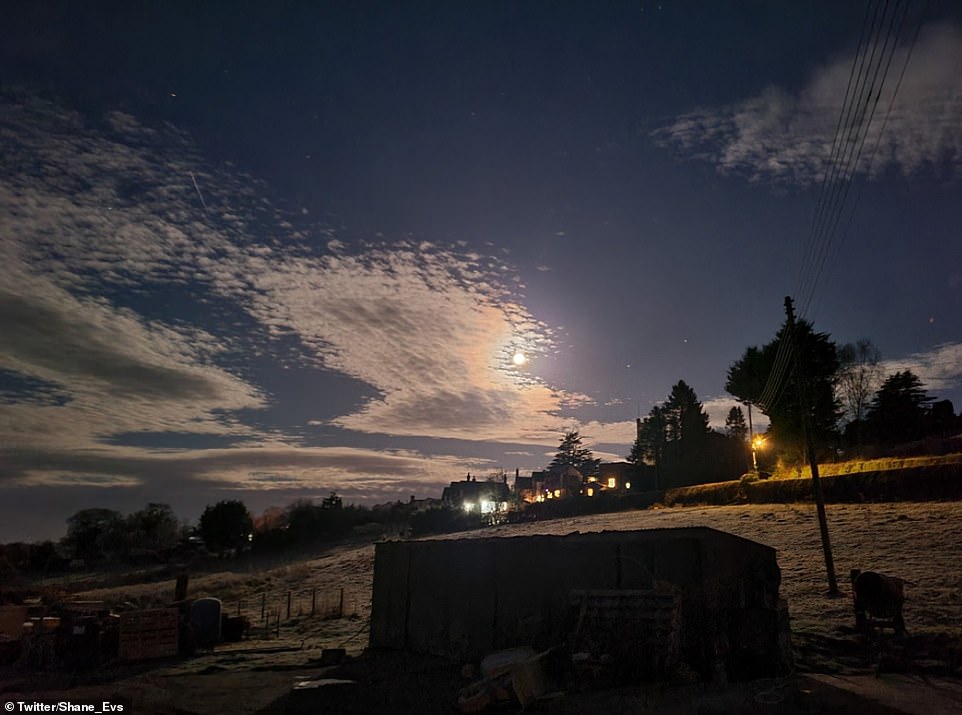 Twitter user Shane from North Wales posted this picture at sunrise today over frost-covered fields, saying it was ‘very cold’ 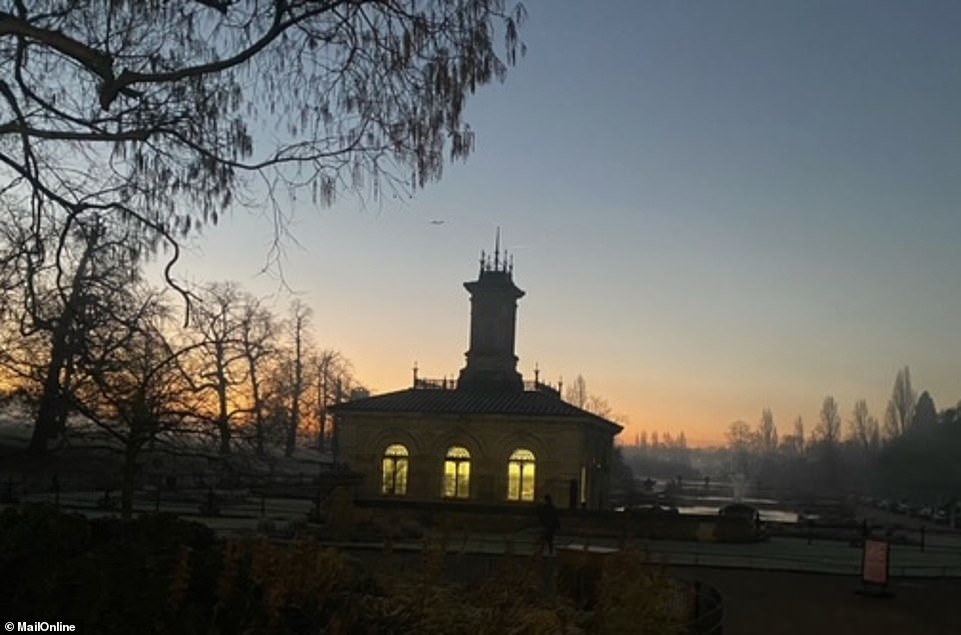 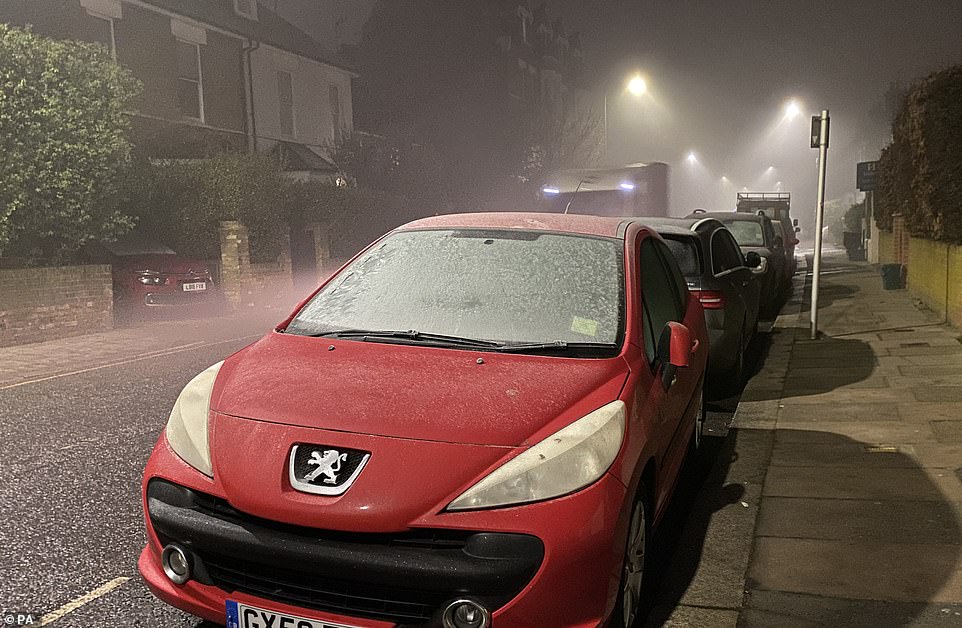 Frost covers the windscreen of a car in Kew, South West London , this morningas the capital wakes up after a sub-zero night 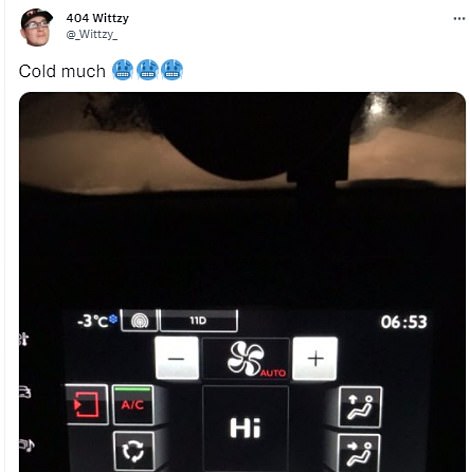 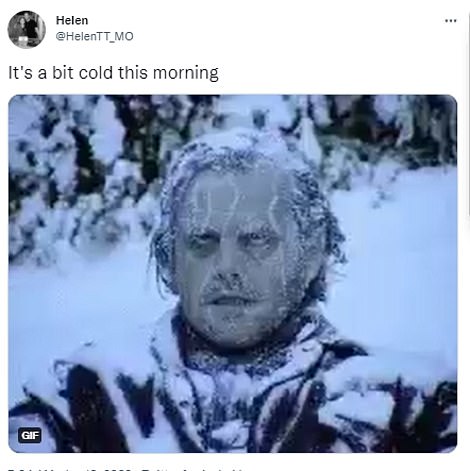 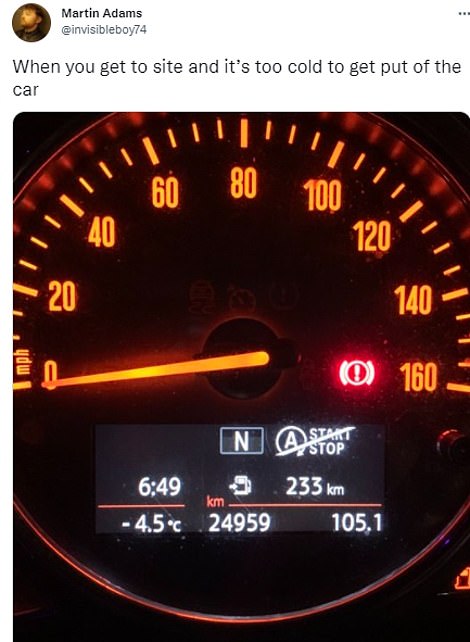 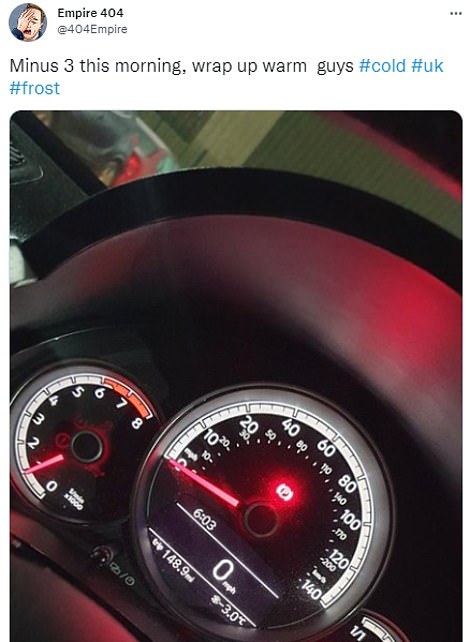 This morning, thick fog blanketed much of the UK and will remain beyond rush hour. The warning encompasses most areas south of Scarborough and east of Manchester in the north, and east of Exeter in the south.

Temperatures dipped to near 0C (32F) overnight for many areas, meaning the fog could freeze on some roads. 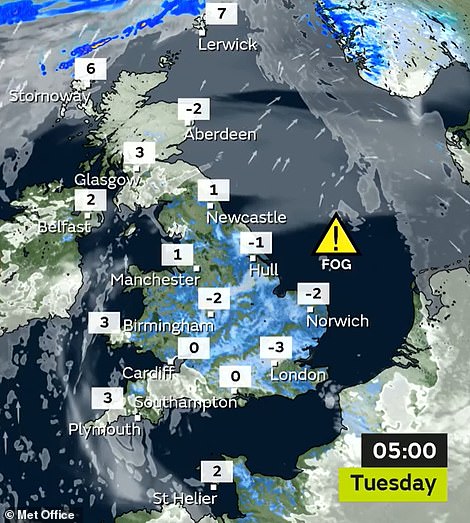 He said: ‘The fog is going to be most widespread in southern, eastern England, into the Midlands and the east side of Wales too.

‘Not everywhere within that warning will be foggy, but the main message to drivers is to allow some extra time for your journey because there could be fog around.

‘It could have a knock-on effect on public transport, so there could be delays to bus journeys and train journeys. The fog will tend to clear as the morning goes on. It may linger on in a few spots, but towards lunchtime conditions should be much better.’

Mr Snell added that a combination of long winter nights, clear skies and still air can cause fog to settle. ‘When the air is quite still, there’s nothing to move the fog around so that’s why it becomes dense,’ he said.

‘This time of year, our nights are long so we don’t have the heat from the sun, and the ground starts to radiate heat from the surface. This creates a long period of cooling. It’s a mixture of clear skies, light winds and long nights.’ 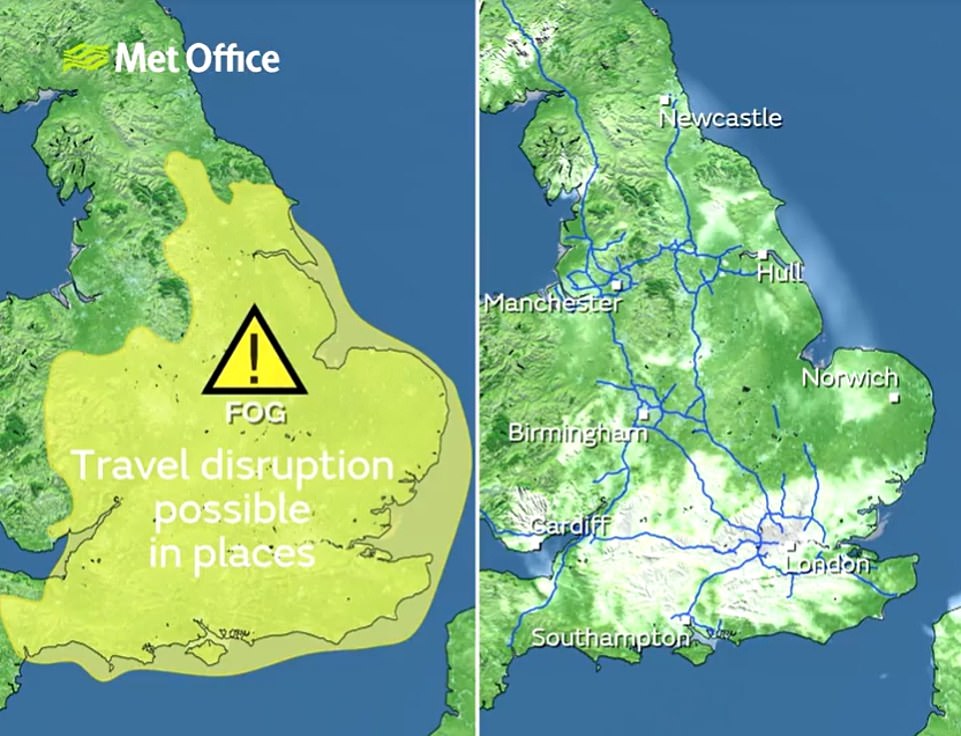 The Met Office warned of disruption to flights, trains and buses as it issued a 17-hour weather warning until midday today 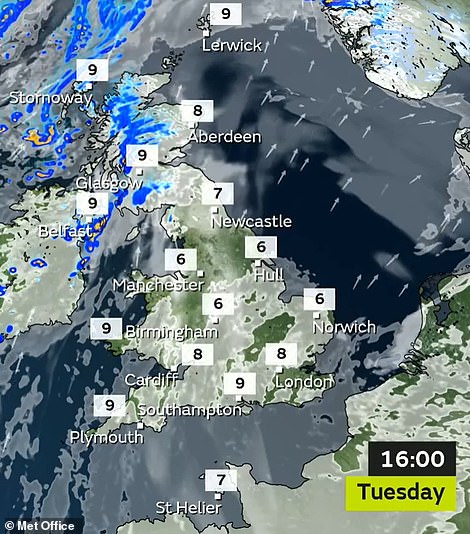 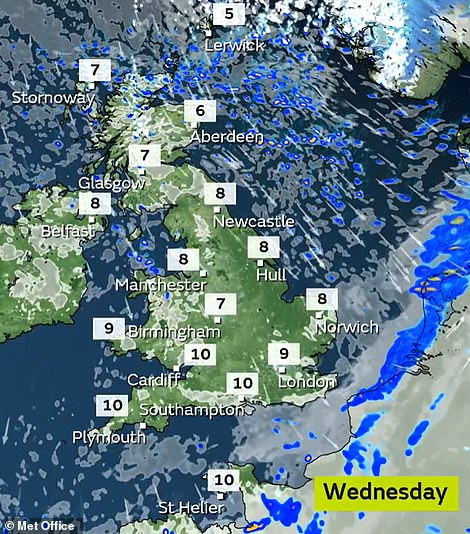 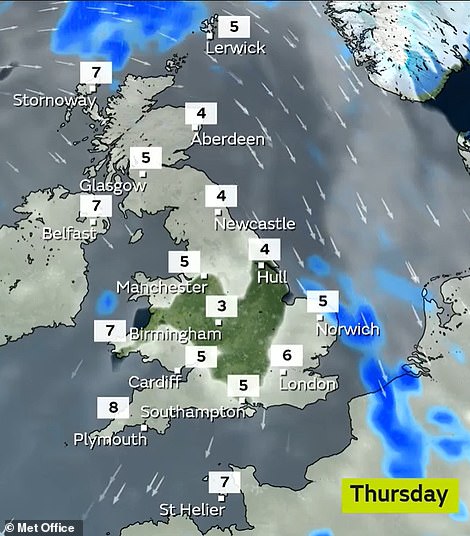 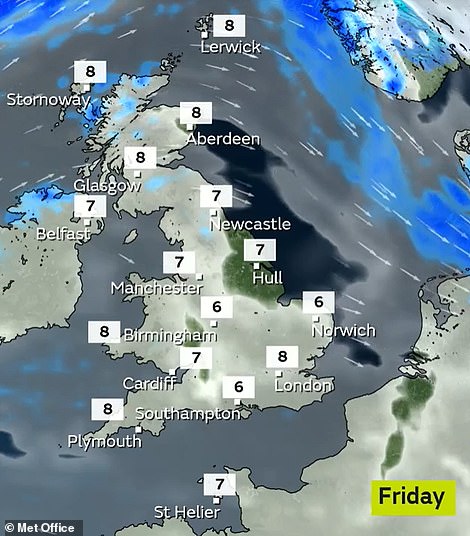 Meanwhile, patchy sunshine and cloud is expected in Scotland and Northern Ireland – and the Met Office said temperatures are around average for the time of year. 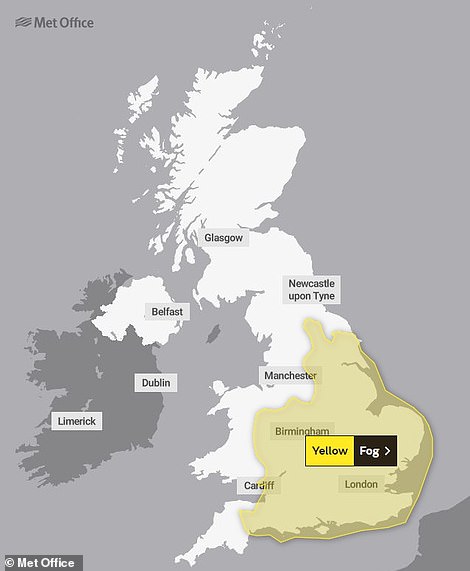 The Met Office issued a fog warning for England this morning

Met Office meteorologist Aiden McGivern said: ‘A cold start to Tuesday across the UK – frost and fog fairly widely in many places, before cloudier skies tend to lift the fog and recover those temperatures later.’

Tonight will be a mostly dry evening however patches of mist and fog will soon reform and there will be large areas of cloud around, with thick cloud cover across northern Britain spreading southwards overnight.

Outbreaks of rain across Northern Ireland and Scotland will track southwards into northern England, before early patches of mist will lift and clear during tomorrow morning.

It will then be cloudy with showers or outbreaks of patchy light rain and drizzle possible during the morning – and cloud and rain will clear southwards to reveal long spells of sunshine during the afternoon.

Early mist on Thursday should clear, then it will be fine during the day with lots of wintry sunshine but cloud will build into Northern Ireland and northern Scotland. Early mist will then be slow to clear on Friday before a dry day.

Need a Gift for Someone Who Never Sends a List? Here Are 25 Gifts They’ll Love