THE parts of England where Covid is spreading fastest among older age groups have been revealed.

Data shows cases in the over 60s are highest in Boston, Lincolnshire, which is currently under Tier 3 restrictions. 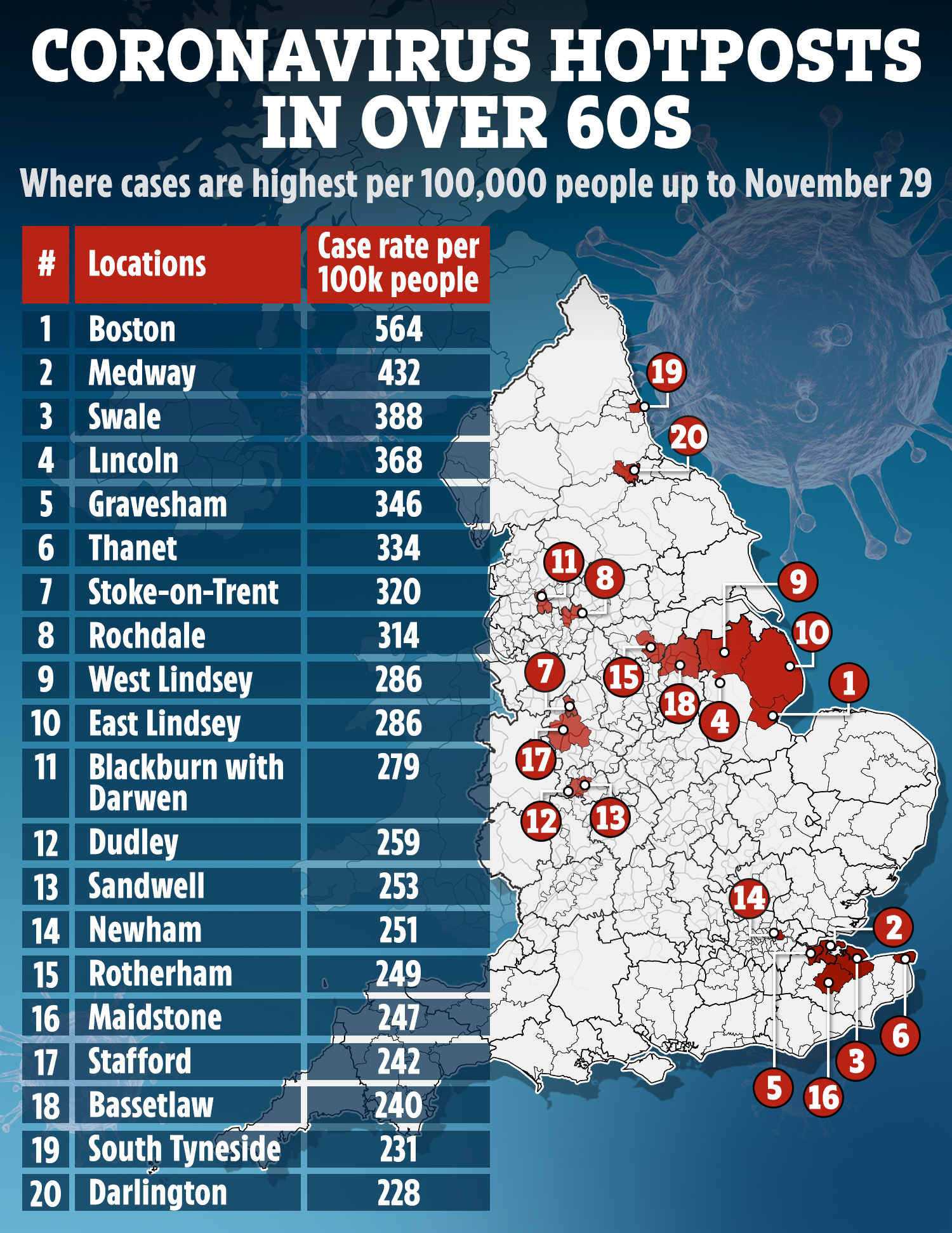 The case rate among older people is a key factor for deciding what tier your area should fall under.

If the virus is spreading in older people, it leads to more hospital admissions, and therefore pressure on the NHS.

Covid-19 is most fatal in older people, but their deaths can be prevented with tougher restrictions.

Sometimes a place with record high cases will not be placed under Tier 3 because figures show it is mostly young people testing positive, who don't typically get seriously unwell.

But once the virus starts spilling out to grandparents or care home residents, it becomes a bigger threat.

Where are the hotspots?

The official data, analysed by the BBC, is based on new coronavirus cases in the week to November 29.

Boston has a case rate of a 564 per 100,000 people – a measurement of how many people have the virus relative to population size.

Boston currently has the third highest infection rate in England, and is under Tier 3 restrictions with the rest of Lincolnshire. 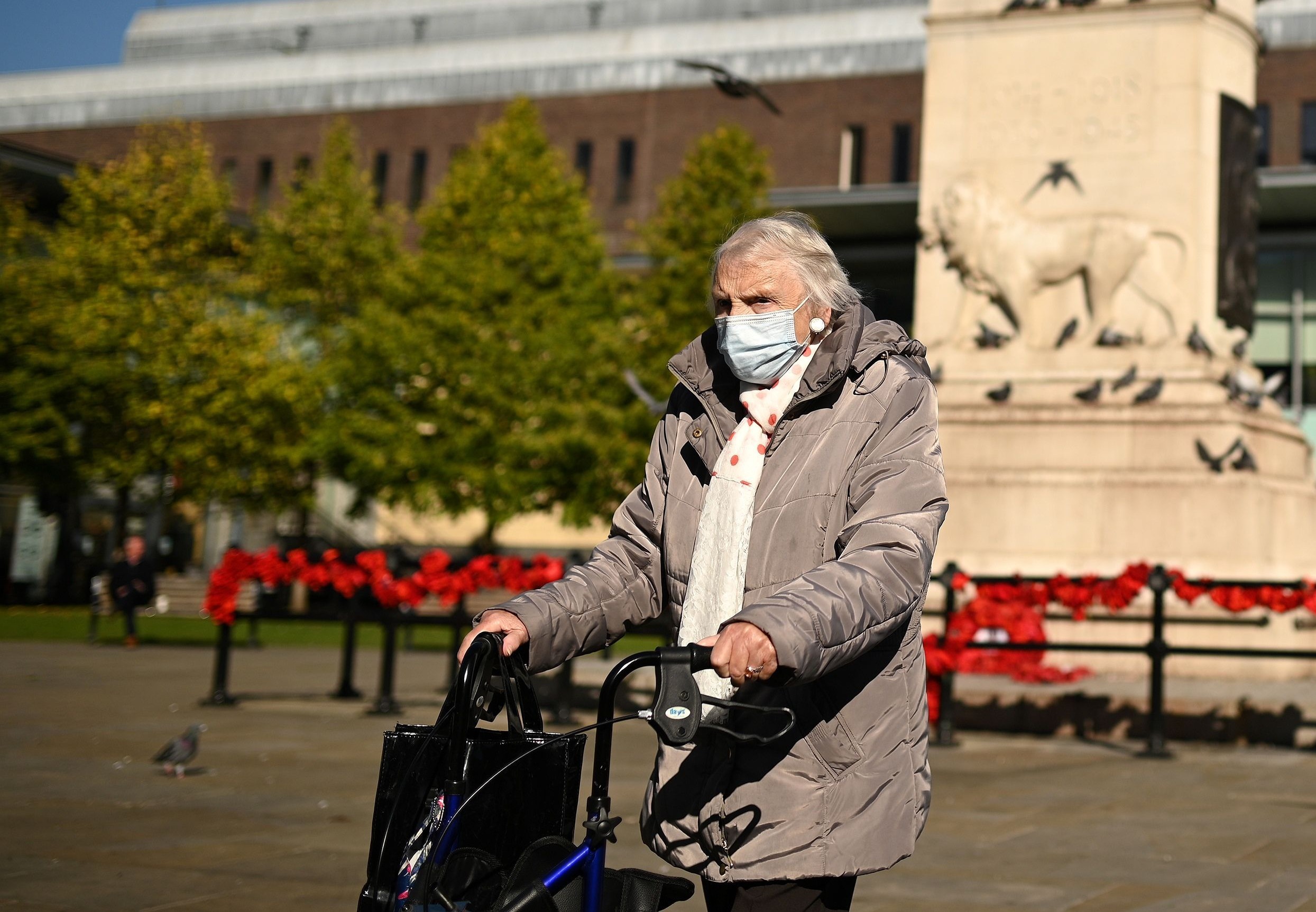 A number of places in Kent are all seeing high infections, which may come as no suprise given the whole county was slapped with Tier 3 restrictions.

Medway has the highest number of cases in the over 60s for Kent, and is second of all places in England, with an infection rate of 432 per 100,000.

Some places in England are recording worrying levels of cases in over 60s, while cases in the young are relatively low.

East Northamptonshire has the largest gap between ages.

In West Lindsey, there was a difference of 82 cases per 100,000 people between those over and under 60 years old.

Fylde, Blackpool, Rotherham and Gosport all had 60 or more cases per 100,000 dividing the two age bands.

One place in London is among the top 20 places with the highest case rate in the over 60s.

How does this affect the tiers?

Officials have always warned that once the virus begins spreading in older generations, its a larger cause for concern.

The government's recent coronavirus impact assessment said: "As with many other diseases, COVID-19 has a more severe impact on vulnerable groups, including older people.

"Allowing the virus to grow exponentially would lead to impacts, in terms of loss of life and ill health, that would be considered intolerable for society."

Not only are there more deaths when older people get the virus, on top of the almost 70,000 so far, but the NHS would come under more strain.

This has a knock-on effect on treating people with other diseases, such as cancer, heart disease and people needing surgery.

Cases in the over 60s is one of the five criteria that the Government consider when deciding on tier alert levels for each authority in England.

When the tiers were announced on November 26, ministers outlined where cases were too high in the over 60s.

Of the 46 county and wider areas used to assign tiers, 23 were highlighted as having "high" or "very high" case rates in the over-60s.

This was based on figures covering the two weeks up to November 19, which may have changed by the time the tiered system came into place on December 2.

Newham is the only area in the top 20 over 60s hotspots that is not in Tier 3.

It's in Tier 2 with the rest of London, as the 32 boroughs of the capital have been lumped together to decide the tier level.

Cases are going down in older age groups

The good news is data shows cases in the older age groups are declining, alongside the rest of the age bands.

In over 60s broadly, cases have gone down to 110 per 100,000 people from 196 four weeks ago, according to the latest flu and Covid-19 surveillance report from Public Health England.

UK to stop funding Save the Children during sexual harassment probe