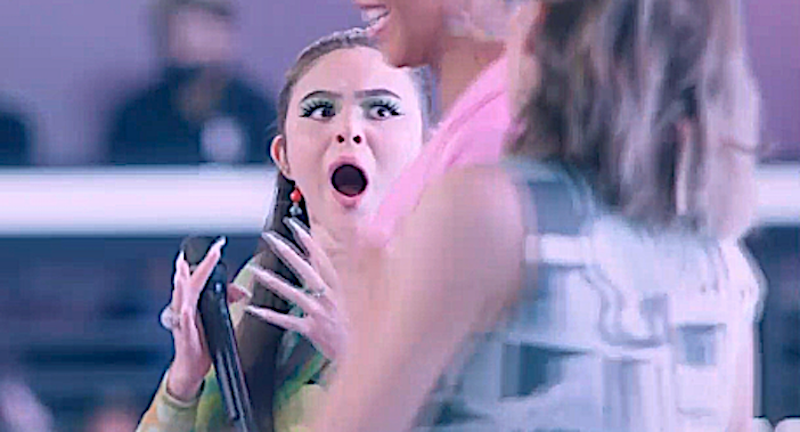 The three-way Knockout Rounds of The Voice Season 22 concluded Monday, and as is typical for the series, it was a nail-biter right down to the end — with the final showdown between Team Gwen teens Alyssa Witrado, Daysia, and Sasha Hurtado yielding a shocker result.

It seemed obvious, at least to me, who’d won this round. Daysia’s “Get Here” was lovely and elegant but old-fashioned and lacking in fire, and Alyssa’s cover of Queen’s “Don’t Stop Me Now” was fun — she wanted her “Freddie Mercury moment,” so she attacked the anthem with gusto — but it was ultimately too “gigantic” a song for Alyssa stay in control or stay in tune. Meanwhile, Gwen Stefani’s own husband Blake Shelton was declaring Sasha the victor, and John Legend described Sasha’s “Make It Rain” performance as “flawless” and a “tour de force.” But Gwen has always had a soft spot for her fashionista mini-me, Alyssa, so she ignored even her adored husband’s advice.

“Sasha, you made it really complicated for me because that was a perfect performance,” Gwen admitted… before choosing to go with Alyssa instead. Gwen even admitted that her connection to Alyssa was “something I can’t put words to.”

Some viewers were no doubt shocked by Gwen’s decision, but no one appeared more flabbergasted than Alyssa herself; her expressive face looked like a living animated GIF as her eyes widened and her jaw dropped. Thankfully for Sasha — who’d already gone through two coaches this season, having started on Team Camila before being stolen by Gwen during the Battle Rounds — there was another surprise during this episode’s final minutes. Sasha got yet another chance — and another coach — when John, who still had a Steal left in play, decided to save her. 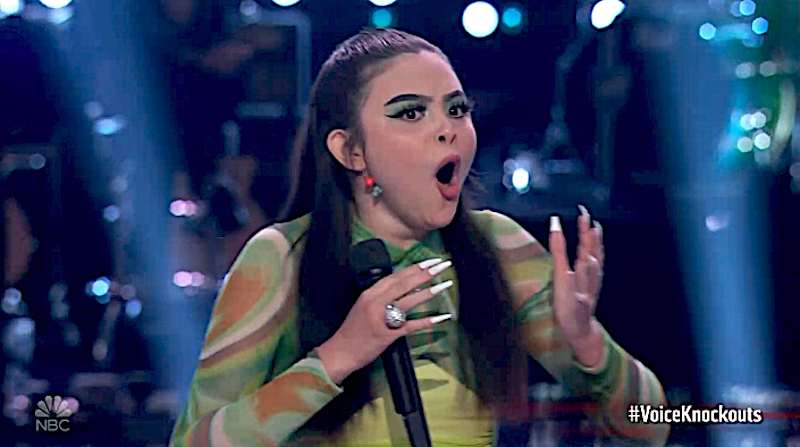 “Sasha deserved it, and I couldn't let her go home,” John explained. “She's been so good throughout these rounds. She's been stolen now twice. And she just hit every note so beautifully and with such precision and control.”

Will the third coach be the charm for Sasha? We shall see, but for now, she has already bucked the odds by making it to next week’s top 16 Live Playoffs. As for whether Alyssa is prepared for the Playoffs remains to be seen, but Gwen seems convinced that the 19-year-old pop starlet is ready for prime time. “With Alyssa, she's just special. What I'm excited to see her do in the Live Playoffs is show what kind of star she really is,” Gwen asserted.

But before we look ahead to the Playoffs, these were the other final Knockouts of the night, some of which also ended with surprising verdicts:

Cara went hard with the early Bonnie Raitt classic “Love Me Like a Man,” playing wailing guitar while also following Gwen’s instructions to be more flirty and animated with her face and body language. This was smoky and sexy, tough but tender, and just all-around fierce. Justin’s cover of Tevin Campbell’s “Can We Talk” was sexy in its own way, but his vocals weren’t quite as silky-smooth as I had hoped, and the verses seemed uncomfortably low for him. Kayla’s “Losing My Religion” was smoldering and quietly compelling, but also vocally unsteady. I thought Cara completely slayed her competition, but once again, Gwen made a choice seemingly based on a contestant’s potential and kept Justin, explaining: “He doesn't really realize how gifted he is.” It’s too bad Camila Cabello didn’t have a Steal left, because she revealed that she would have saved Cara if she’d had the chance.

Blake pitted his three youngest artists against each other “to see which one of them is the most ready for the Lives” — and interestingly, it was the youngest of the three, 16-year-old Brayden, who fared the best. Austin’s quivery vibrato on George Strait’s “You Look So Good in Love” was distracting, and Eva’s “Dangerous Woman” was too tame and simply not dangerous enough. But Brett was so vulnerable and sincere crooning Brett Young’s heartbreak ballad “Mercy” with only sparse piano accompaniment, and he had a moment. “I think Gwen fell in love with you,” Camila giggled, to which Gwen quipped, “Yeah, in a mom way!” Blake told Brayden, “You chose a song that there was nowhere to hide in. That's scary. You get in the zone, and it's so good. And I don't think you've sounded better. Everything was spot-on.” Blake made the right call here, and Camila was right, too: Girls of all ages are going to fall in love with this kid.

TEAM LEGEND: Emma Brooke vs. Kim Cruse vs. the Marilynds

Emma did not choose wisely with Gabby Barrett’s “I Hope”; she just couldn’t loosen up and shake her classical training, so she didn’t bring the attitude needed to pull off this woman-scorned revenge anthem. The Marilynds’ creative and harmony-laden arrangement of Snow Patrol’s “Chasing Cars” was actually exquisite, enough so that John thought this sister duo could follow in the footsteps of Girl Named Tom, the sibling act that won The Voice last season. (Blake actually compared the Marilynds to Wilson Phillips.) But no one could compete with powerhouse Kim and her torchy, bluesy, Tina Turner-inspired rendition of “Can’t Stand the Rain.” Camila told her, “You were a dragon up there. It was just fire. You've always been one of the most gifted and masterful vocalists of the show.” Gwen told Kim, “It's mind-blowing. It doesn't make sense on paper that you can actually sing like that!” So, John did what he had to do. “I had to pick Kim because she's just a world-class vocalist,” he said. “She just commanded the stage and was so intentional with everything she did. America's got to love her.”

I assumed I’d be leaning towards one of Camila’s indie singers — Devix, who did Coldplay’s “Yellow,” or Andrew, who did the second R.E.M. cover of the evening with “Everybody Hurts” — over conservative balladeer Steven. I hadn’t even wanted Camila to save Steven during the Battles in the first place. But this week, Steven floored me, and I thought he’d finally been matched with the right song. Steven’s rendition of Bruno Mars’s massive, emotive ballad “It Will Rain” was positively Michael Bolton-esque; John even gasped, “Whoa!” when he heard Steven belt so passionately. Meanwhile, I thought the other two tepid contestants held back. But once again, we had another surprise judgment. “I had to pick Devix for the Live Playoffs because his voice is just unreal, and he produces and he's a creative force. He's just putting his heart and soul into every performance,” Camila explained. I do think Devix was the most interesting artist of these three, and is maybe even one of the most interesting artists of the season, and I too am excited to see what he does next — but I still think Steven technically won this Knockout.

So, now we have our top 16, who will begin competing live for America’s votes next Monday. In the meantime, The Voice won’t air in its usual Tuesday time slot this week, because there’s another sort of very important voting going on that day. See you next week.

China says its ban on a WHO mission is a 'misunderstanding'