More than 16,000 homes across Victoria are still without power, as the clean-up from last week’s damaging winds and storms continues.

More wild weather is on the way for the state, with rain and winds, gusting up to 50km/h expected early on Wednesday. Power is not expected to be fully restored in all areas affected by last week’s storms until Friday. 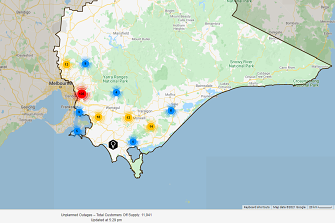 Mobile phone, landline and internet services are also expected to remain severely disrupted for several days in some of the hardest-hit regions, including parts of Mornington Peninsula.

The state government said power had been restored to most of the 518,000 households that experienced a black out on Friday. The ranks of the Victorian State Emergency Services had also been bolstered by crews from NSW as the clean-up continued

Optus told The Age that 22 of its mobile phone towers in the state, including some at Mornington Peninsula, were affected by the storm and a “large number” of its installations had been kept operating by back-up batteries.

NBN Co said on Tuesday that only about 300 of its customers in the area were still without internet coverage, down from 1200 on Monday.

A Vodafone spokesman said all the company’s infrastructure in the region was working normally and Telstra did not respond to questions.

Many homes around the state are still running on petrol or diesel generators or have no power at all while they await reconnection.

Michelle Gallant who lives on the outskirts of Montrose in the Dandenong Ranges in Melbourne’s east said the home she shares with her husband, David Rose, was being powered by a generator the couple bought after their electricity supply was cut for six days following the last disastrous storm that hit the area in July.

“For us, it’s inconvenient,” Ms Gallant said. “It’s costing us about $30 a day in unleaded petrol – I didn’t realise it would run into quite that much.”

Ms Gallant said while the generator was able to keep the fridge and a light going in the evening, there wasn’t enough power to run the washing machine.

She said she was thankful their home hadn’t been damaged in the winds, and said they would keep a close eye on the radar over the coming hours as they remained concerned about trees falling.

Get a daily update on the climate summit that will shape our future. Sign up to our Clear Air newsletter here.

How Natti Natasha Has Evolved for Her 'Nattividad' Era