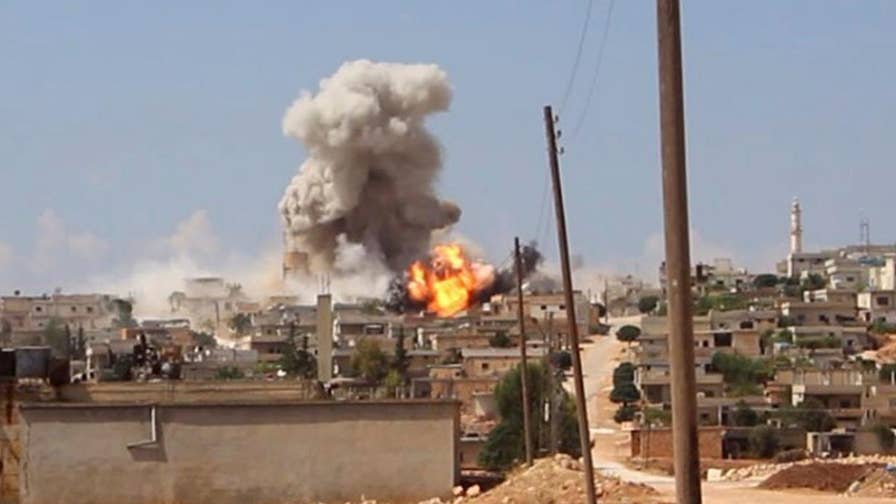 The Trump administration’s stern warnings against plans by Syrian president Bashar al-Assad and his allies – namely Iran and Russia to wipe out the opposition-held stronghold of Idlib have at least temporarily kept the expected attack from moving forward, Syrian opposition activists tell Fox News.

“The offensive is certainly on hold, and that is in large part a result of the renewed commitment from the United States to establish consequences should Russia and the regime continue with reckless bombing of Idlib,” said Kenan Rahmani, Advocacy Manager at The Syria Campaign.

President Trump this week joined the voices of his entire foreign policy team – Vice President Mike Pence, U.N Ambassador Nikki Haley, Secretary of Defense James Mattis, National Security Advisor John Bolton, Secretary of State Mike Pompeo and new Syria envoy James Jeffrey – in issuing grim warnings to the Syrian government and its allies regarding the fate of Idlib, a city near the Syrian-Turkish border, where the remaining forces of Syrian opposition are holding out.

Rahmani on Thursday noted that in the previous 24 hours, air strikes from Russian aircraft in rebel-held areas significantly decreased,  and lowered in intensity, a sign that America’s “renewed commitment” to standing up to powers in Moscow and Damascus – accompanied by the Turkish government’s deployment of more military equipment to the region – has brought a temporary reprieve.

“Russia and the regime have a long history of testing red lines and seeing what they can get away with, but there is a sense this time that this isn’t just rhetoric from the U.S, this is an actual policy,” Rahmani continued. “And the policy is that the U.S will absolutely not allow mass killings and mass atrocities.”

A Pentagon official confirmed the U.S. has seen a recent decrease in Russian airstrikes – though the situation remains dire.

"Last week, despite warnings from the United States, United Nations, and U.S. allies – Russian Forces backing the Syrian regime extensively used airstrikes and barrel bombs, accompanied by regime rocket and artillery fire, in Idlib. In the last two days, however, we have seen some reduction in these attacks, and we welcome and encourage any lessening of violence, particularly in vulnerable civilian areas," said Commander Sean Robertson, a Pentagon spokesperson.

"We have engaged the Russian government and military at the most senior level to make clear that the U.S. and its partners would respond to any verified chemical weapon use in Idlib or elsewhere in Syria in a swift and appropriate manner," Robertson added. "We encourage Russia to make this point clear to Damascus. Syria, Russia and Iran should know that the United States and the rest of the world are watching very closely, and will take appropriate action if there is a new slaughter in Idlib."

Ayman Abdel Nour, founder of the pro-opposition humanitarian aid organization Syrian Christians for Peace, agreed the clear message from the Trump team was not only welcomed, but had a quick impact on regime and Russian behavior.

“The U.S is still the biggest player on the world stage, and when they raise the doors it matters,” he said. “Assad can’t do anything without Russia, and the second day after the Trump tweet warning them the Idlib operation was paralyzed. Russia used to caution that Idlib would be cleaned out by the end of September, now they are saying end of year which at least gives more time for a diplomatic deal.”

Inside Idlib: concerns that innocent civilians will die in an all-out assault by pro-government forces

Jeffrey acknowledged last week the U.S had deliberately started using “new language,” moving from threats that not only would a suspected chemical weapons attack not be accepted, but that the U.S. would not put up with any attack in Idlib “period.”

“Any offensive to us is objectionable as a reckless escalation,” he said, stressing the creation of a refugee flow or attack on innocent civilians would be met with consequences.

U.S defense insiders have said “massive bombing packages” are being drawn up by the Pentagon, should Assad defy warnings and go ahead with a chemical attack in Idlib. One defense specialist, speaking on the condition of anonymity, emphasized that large-scale regime strikes would likely be retaliatory rather than pre-emptive, though adding that Syrian chemical weapons depots have already been identified.

“The U.S. just isn’t going to tolerate it,” the source added.

Retired Col. James Williamson, founder of OPSEC – a non-partisan advocacy organization focused on protecting national intelligence assets – concurred that the tough talk, for now, appears to be forestalling a Syrian offensive, but that warnings will need to be backed up with a potent military response if need be.

US officials have sternly warned against the creation of another refugee flow from Idlib, Syria

“When diplomacy fails, you set a red line and then you act decisively when and if it is crossed. I have no doubt this president will do just that,” Williamson said.

The Syrian government, along with Russia and Iran, have consistently and vehemently denied ever having used chemical weapons in the protracted civil war, despite U.N assertions they have been deployed at least a dozen times.

Hisham al-Skeif, deputy head of the political bureau of the prominent opposition group, known as the Peace Brigades, emphasized that major powers coming together has had a sizeable impact.

“The position of the United States and Trump is very powerful, with Europe standing by their side and Turkey too standing a strong stance has helped postpone the offensive,” he noted. “Turkey and the U.S need to continue their cooperation, they can restrain Russia.”

Turkey, the main international backer of the rebels, has reportedly been working to reach a peace deal with Russian and Iranian officials. Turkey’s own envoy, Feriddun Sinirlioglu, this week appealed to the international community to “vocally and actively” support a ceasefire in Idlib.

MORE IRANIANS ‘BUYING’ PASSPORTS IN OTHER COUNTRIES TO EVADE US TRAVEL BAN, SANCTIONS

However, the fear of both a barrage of chemical weapons and all-out barrel bombing is still very palpable through the overcrowded streets of Idlib.

“Turkey has secured borders; it is very scary. There are more than three million people here with nowhere to go,” Walid Ased, a 31-year-old mathematics teacher in Idlib, told Fox News in a telephone interview. “Trump is time trading with the harsh statements about chemicals, but Assad kills us every day with explosives and barrel bombs and missiles and no one cares for that.”

Former Syrian Brig. Gen. Zaher al-Sakat – once the Assad regime’s chemical weapons chief in charge of such operations before defecting to Europe in 2013 –  concurred it is only a matter of time.

“There will be another chemical attack, it is clear from Russian speeches they are claiming in advance that the rebels have chemical weapons, which means that Russia and the regime will use chemicals and then blame it on others,” he told Fox News. “Even if a group like al-Qaeda had chemical weapons, they don’t have the equipment to use it.”

U.N investigators announced on Wednesday they had chronicled at least three more uses of banned chlorine weapons by Syrian government forces that amounted to war crimes, and called on world leaders to take definitive steps to fend off a “massacre” in Idlib.

“Assad takes Trumps threats seriously that there will be a price to pay. Nevertheless, I don’t think the U.S. will be able to dramatically alter the course of the Idlib offensive and the humanitarian disaster that will ensue,” added Raphael D. Marcus, a research fellow at the Department of War Studies, King’s College London.

Brig. Gen. Zaher al-Sakat, once the military’s chemical weapons chief in charge of such scientific operations for the Syrian Army, says more such attacks are likely.

“But the announcement that they plan to keep U.S. troops on the ground in Syria is an effort to minimize, at least slightly, Iran and Russian influence and attempt to shape the aftermath.”

Hollie McKay has been a FoxNews.com staff reporter since 2007. She has reported extensively from the Middle East on the rise and fall of terrorist groups such as ISIS in Iraq. Follow her on twitter at @holliesmckay