More Victorians than ever are being left waiting for an urgent ambulance response or to be seen at emergency departments, as the state’s frontline health services continue to be stretched by staff illness and increasingly sick patients.

Victoria’s latest quarterly health performance data released on Saturday shows a dramatic increase in the number of people who have been stuck in emergency departments for more than a day, as they wait for a bed to become available at hospitals grappling with COVID, the flu and care delayed as a result of the pandemic.

From April to June this year, 1844 patients had their ED stays stretch out for more than 24 hours, a more than four-fold increase in a year. 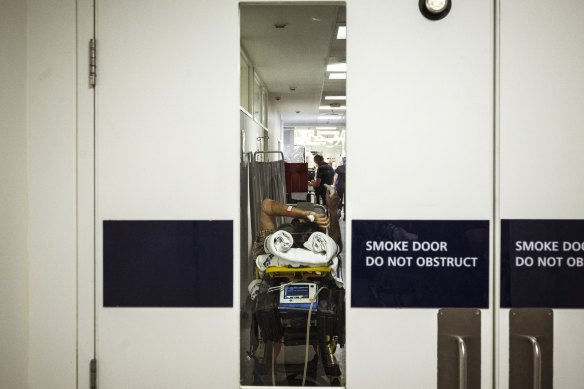 More than 1800 Victorians spent more than 24 hours in an emergency department due to the intense pressure on the hospital system. Credit:Chris Hopkins

Meanwhile, Ambulance Victoria is falling considerably short of its target to reach 85 per cent of the state’s code-one cases within 15 minutes, following a third consecutive quarter where code one demand records have been broken.

In good news, there has been a small improvement in the number of Victorians waiting for “planned” or elective surgeries which now stands at just above 87,000, a decrease of about 1600.

However, the data does not include the peak of the latest Omicron wave, which disrupted elective surgery as beds were taken up by COVID-19 patients or staff fell sick to COVID, the flu or other winter illnesses.

Victorian Health Minister Mary-Anne Thomas said it was not yet possible to say with confidence that the elective surgery waiting list would have continued to decline over the months to come.

“We’re still feeling the impacts of COVID in our healthcare system. In this quarter that we’re in right now, we’ve seen significant hospitalisations with COVID, we continue to see furloughing, but we’ve put in place a series of reforms and I hope to see those continue to deliver outcomes,” she said.

“We are working with all of our health care services to ensure that everyone on a waiting list is being actively managed. If anyone is concerned about increasing pain or they’re worried about their symptoms, please go and see your GP.”

“Every second counts for a code one, and those targets are nowhere near being met. This isn’t just caused because of COVID. It’s years of underinvestment and mismanagement by the Andrews Labor government.”