A Washington state officer who was fatally shot in the head during a gunfight with a suspect was hit by a round fired by his partner, investigators said Friday.

Jonathan Shoop, a 32-year-old officer with the Bothel Police Department, was on duty with his field-training officer, Mustafa Kumcur, on Monday night when they attempted a traffic stop on a black sedan without license plates, but the suspect drove away, Snohomish County Sheriff’s Det. David Fontenot wrote in a probable cause statement filed in court. 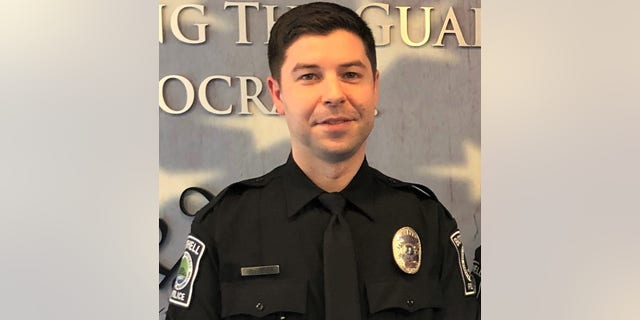 The suspect, Eugene Washington, fled police, initially resulting in a brief car chase. He rammed a 20-year-old man on a scooter and crashed through a median before coming to a stop, authorities said.

Washington then got out of his vehicle and fired two rounds into the patrol SUV, breaking the driver's side window where Shoop was seated. The second shot struck Kumcur's gun and ricocheted off of it, grazing Kumcur in the head.

A witness told investigators that the shooter shouted “Come on, pig” as he fired, Fontenot wrote.

Both officers returned fire, shooting off nine rounds, but a bullet from Kumcur's gun struck Shoop in the head, killing him, investigators said.

Kumcur pulled Shoop from the vehicle and tried to save his life, Fontenot wrote. Medics arrived as well, but Shoop was pronounced dead on the scene.

“This was a chaotic chain of events that occurred over the span of close to only two seconds," Bothell City Manager Jennifer Phillips said in a statement.

"The officers were still in their vehicle and were quickly approached by a suspect with a firearm. Based on the investigation updates, it appears there was a tragic crossfire situation that resulted in the death of one of our officers. Let us be clear, we believe the actions of the suspect led to this tragic event.”

Washington, who initially alluded police after the fatal incident, was arrested early Tuesday morning after hiding out on a roof near the scene of the shooting and then getting stuck in between two buildings.

Casey McNerthney, a spokesman for the King County Prosecutor's Office, said in an emailed statement to The Associated Press, that Washington was legally responsible for the death.

“But for Mr. Washington’s directed attack on the officers, Officer Shoop would be alive today," he said.

Shoop had been with the police department for a little over a year. Police said he is survived by his fiance, his mother, and two brothers.

Why Baking Bread Has Always Been A Feminist Act, According To 6 Female Bakers

Hong Kong officials warn of a new wave of infections.

Buy Low-Tops, Sell High-Tops: A Sneaker Exchange Is Worth $1 Billion