Home » World News » What readers really think about Jeremy Clarkson… so do you agree?

What MailOnline readers really think about Jeremy Clarkson… so do you agree with 20 of the best-rated comments?

The perceived ‘cancelling’ of Jeremy Clarkson over his controversial Meghan Markle column has divided public opinion this week.

Writing in the Sun in December, Clarkson said he ‘hated’ the Duchess of Sussex and wanted to see her paraded through the streets naked while people throw ‘excrement’ at her – apparently referencing a public shaming scene from the fantasy TV series Game of Thrones.

His apologies were this week rebuked by Harry and Meghan and Amazon Prime is set to stop producing the presenter’s shows – Clarkson’s Farm and The Grand Tour – next year.  Meanwhile, ITV bosses said they had no ‘commitments’ to further editions of Who Wants To Be A Millionaire? – fronted by Clarkson – beyond the upcoming, already-commissioned series.

MailOnline readers were asked to give their opinion on the controversy, and in a poll of more than 3,000 people, some 78 per cent backed the former Top Gear host to keep presenting Millionaire, while just 19 per cent thought he should be sacked.

Below are 20 of the best rated comments…. 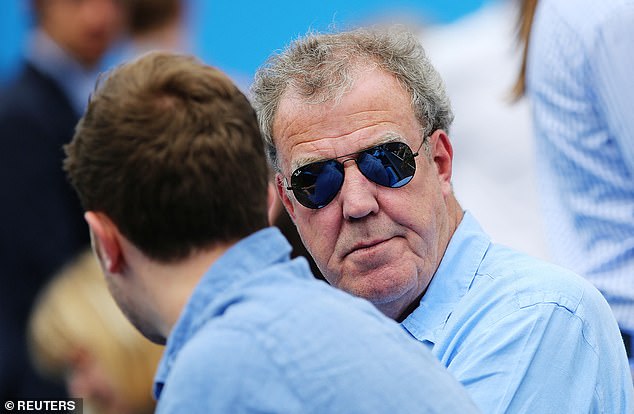 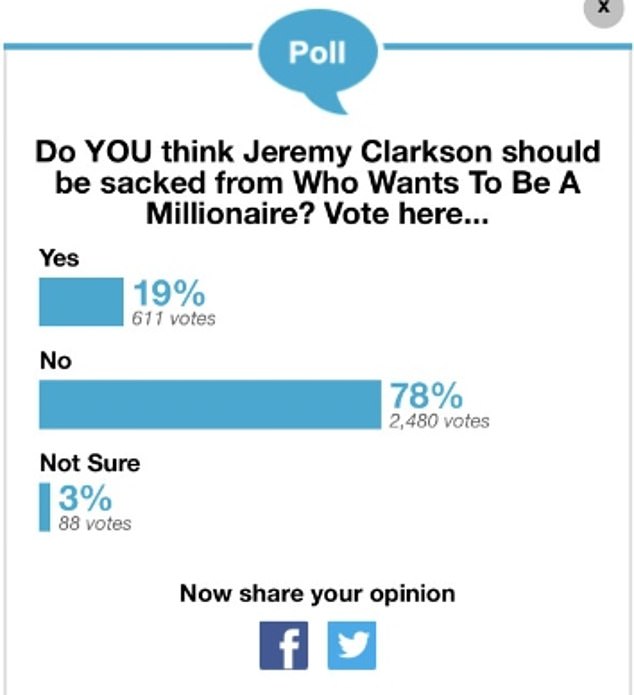 In a poll of more than 3,000 people, some 78 per cent backed the former Top Gear host to keep presenting the quiz show, while just 19 per cent thought he should be sacked. Three per cent said they were unsure

Not a particular fan of his, although I have enjoyed the Farm series, but he apologised, lets just move on. It was gross and over the top what he said, and there was no need, but folk have said and done far worse over the years. We are getting to the stage where we dare not open our moths in public for fear of being cancelled. Suzie, north west England

He hasn’t BEEN cancelled, he has cancelled himself. He has exercised his right to ‘free speech’ and his employers will exercise their right to no longer employ someone with views incompatible to their own standards. Shame, because I enjoy his programmes. Anonymous, United Kingdom

Whether you’re a fan of Jeremy Clarkson or not (I’m indifferent), we should ALL be wary of others’ wish to CANCEL anyone with whom they disagree. Today, it’s Clarkson’s turn, but who next? Maybe YOU! Anonymous, Wakefield

No way he should be cancelled but free speech can’t exist without consequences when you go too far, which he did. We no longer live in a time of logic or balance, he’s not the first and won’t be the last, he’s come back from a few controversies in the past and probably will again. Anonymous, Nottingham

Whatever you think of Clarkson this cancel culture is dangerous. Its being used to silence anyone who goes against the flow of current righteousness. Maybe you support oil or coal. Maybe you don’t like electric cars. Maybe you are interested in our history, warts and all. Maybe you eat meat or maybe you just want to enjoy life your way. But no. You’re wrong and must be silenced. Tbarn, Plymouth

He’s not been ‘cancelled’, he’s been sacked because his behaviour isn’t compatible with the standards required by his employers. However he’s still free to say exactly what he wants. He’s NOT been cancelled! Peter, United Kingdom

In a public rejection of his apologies, the Sussexes’ cheerleader, Omid Scobie, tweeted a statement from a spokesperson for Harry and Meghan (pictured together), accusing Clarkson of ‘spreading dangerous conspiracy theories, and misogyny’

Clarkson is one of our few stand out TV personalities, love him or loath him. Free speech is dead in the UK, while the Woke reign amidst growing strength. Anonymous, Newdigate

Clarkson can be a bit uncouth let’s say, that’s what makes him Clarkson. What he articulated was somewhat heavy-handed. Should he be cancelled for what’s happened here? I’m not sure he should be. By all means drop him if he’s a rubbish presenter, but people like watching him. I don’t watch him myself, and I don’t particularly care for him. This drama shouldn’t bring about the end of his TV work though. Anonymous, London

I will not shed any tears over Clarkson or indeed H&M but do not believe his shows should be cancelled. If people are upset by what he said then they can choose to stop watching his shows. The broadcasters will then have a legitimate reason for cancelling his shows – lack of viewers. Scottie, United Kingdom

Does Jeremy Clarkson even need the money? How presenter has amassed an estimated £55million fortune thanks to lucrative Amazon and ITV deals, books and Diddly Squat

I’m going to go out of my way to stop using Amazon. There are plenty of other alternatives, it just takes a few minutes of searching. I never voted for Bezos, no one did. He’s becoming a woke tyrant. Emily, Westwood, US

Jezza is great, I hope he moves Clarkson’s farm to another streaming platform, I know there will be a lot of takers. As for ITV I don’t now what to say as they are losing out. He was the best host ever. Steven, United Kingdom

Contrary to what many here seem to think Jeremy Clarkson has not been denied his right to freedom of speech. In fact he has said what he wanted to say via the medium of a national newspaper, something many of us never get the opportunity to do. However, having freedom of speech does not exempt someone from responsibility for reactions to what they say, for example the reactions of TV companies that JC presents programs for. Winston, Belfast

He’s been through this rubbish before, was proven right, and will do so again. Storm in a teacup. Mario, London

He said it – he thought it out and now he can’t get away with it. He is arrogant but chose the wrong one to insult this time. Hopefully he will have a lot of time to count his £55 million – Like her or not, no woman deserves comments like that. Winifred, United Kingdom

He deserves to be cancelled. I am no Meghan fan but what he said about her was unacceptable. Anonymous, Dublin

This cancel culture stuff is getting out of hand. Sorry to see all this happening to Jeremy. Anonymous, Texas, US

If I copied everyone at work into an email fantasising about throwing s**t at someone I reckon I’d get cancelled to be fair. Owen, Northumberland

10 years ago Jeremy Clarksons Top Gear was bringing the BBC over 42 million per year as it was being sold around the World – and it carried on doing so. It was the BBCs biggest money maker. ‘Was’ being the operative word. Go woke – go broke. Anonymous, Aland Islands

Clarkson is a liability, which is part of the appeal. What he wrote was over the top and he should know better, but it was done in a newspaper, not in ITV or Amazon. The newspaper can suspend him or sack him, whatever. He’s apologised and did nothing wrong in his TV programmes. He should not be penalised for things he did elsewhere in a completely unrelated context. Alex, Hull

What he said was beyond awful. When you are a public figure you need to be very careful what you say. Yes you can have an opinion and voice it but that does not mean there will not be consequences. This is a lesson celebrities whose incomes are dependent on their behavior need to learn. It is very disturbing for someone to call for violence against women. We see enough of that everyday and don’t need someone to suggest to a lunatic to take it upon themselves to do something horrendous to an individual no matter how much they are hated. Anonymous, US

How Joe Jonas Is Pampering Sophie Turner During Pregnancy, Proving He’ll Be ‘An Awesome Dad’

The 5 Best Drugstore Shampoos For A Dry Scalp