A woman and two children were rescued after finding themselves trapped in quicksand on a beach notorious for its shifting sands.

Fire crews, Coastguards and a hovercraft were called after the trio got stuck at Burnham-On-Sea, Somerset on Saturday.

A fire spokesman said that due to the incoming tide, several teams had been called to enable a swift rescue. 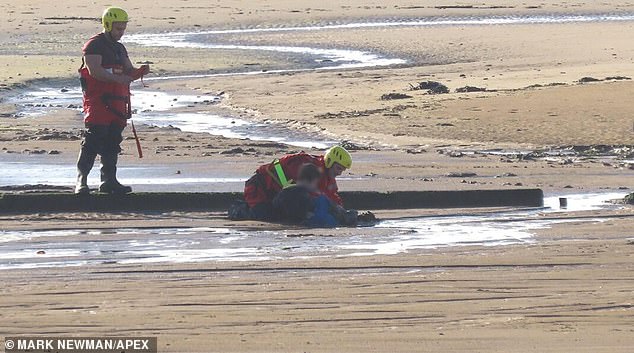 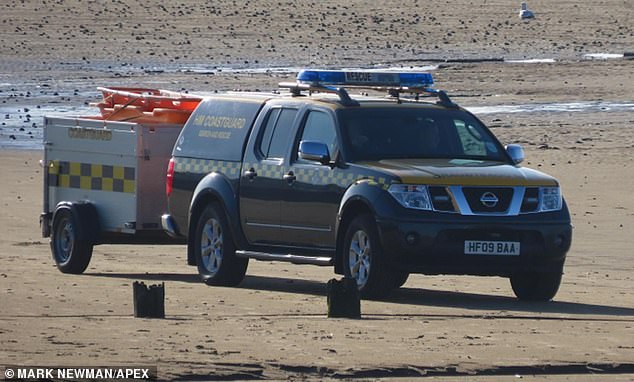 Fire crews, Coastguards and a hovercraft were called after the trio got stuck at Burnham-On-Sea, Somerset on Saturday 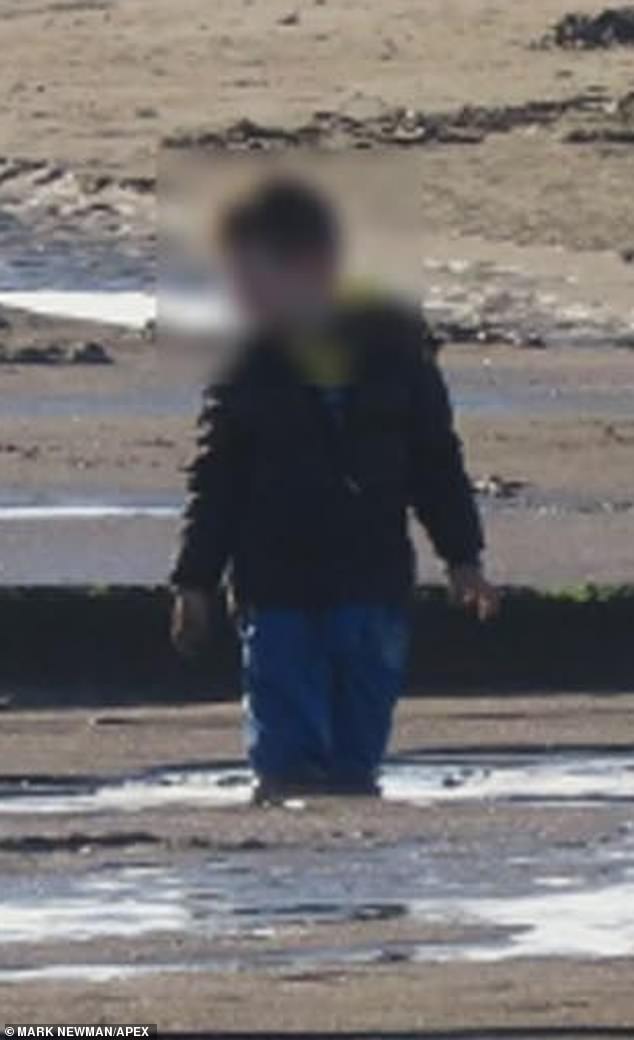 An eyewitness said: ‘The lady and two children just seemed to be unlucky to get stuck in a patch of soft sand and mud in the middle of the beach.’

‘After they raised the alarm, the emergency services were quickly there in minutes to help.

‘The lady was very relieved that it all ended positively.’

The area around Burnham-on-Sea and Weston-Super-Mare has seen a host of similar incidents involving quicksand over the years.

In August last year, a holidaymaker was forced to watch helplessly as his car was -submerged in the sands off Weston-Super-Mare.

Hobbyist photographer Tim Curtis, 61, had been heading down the beachfront when he spotted a seven-seater Ford stuck in the sand and decided to capture the moment on camera.

His images showed all four of the vehicle’s wheels sinking into the sand while the helpless driver stood nearby on the phone and the tide drew nearer.

Just moments later, the van submerged in the depths of the water, with just the top half of the vehicle protruding from the waves. 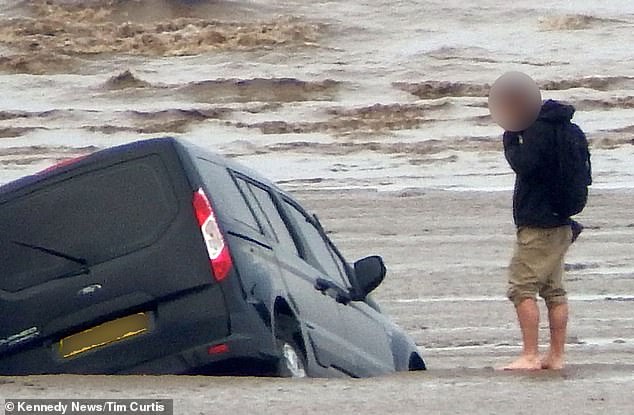 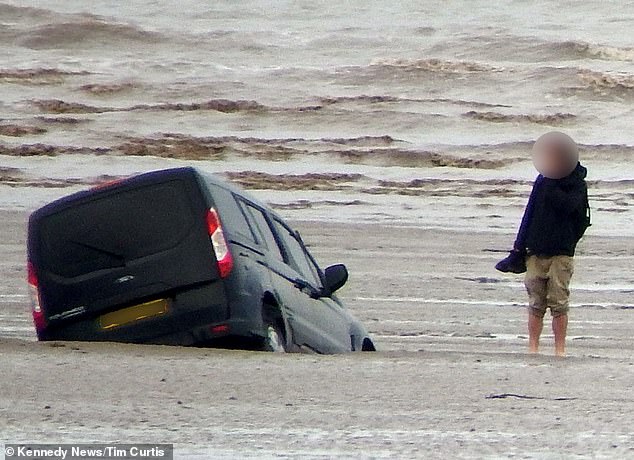 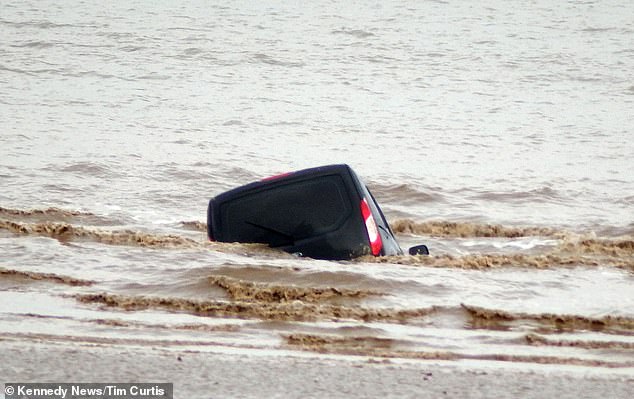 Mr Curtis said he was told the holidaymaker attempted to drive too close to the sea to give his child a closer look.

The disgruntled owner returned the following morning when the tide had gone out, but he was unable to recover the vehicle, which remained there the following night – more than four high tides since it was first stranded.

The construction contract manager last insisted he had ‘no sympathy’ with the driver because he hadn’t read the warning signs about on-beach driving.

In August 2019, a woman and her niece also had to be rescued from quicksand in Weston-Super-Mare after the young girl wandered into the mire.

After following her niece 1000ft out under the pier, the aunt found herself stuck in mud, sinking up to her waist.

Fire and rescue crews were called and arrived by hovercraft to help the pair out of the quicksand. 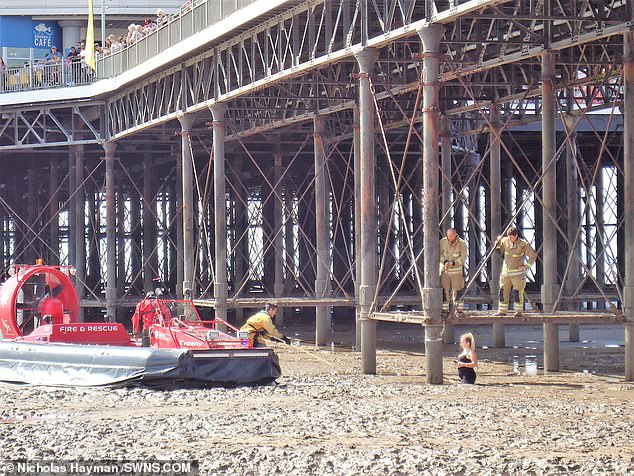 The rescue begins: Firemen begin laying planks of wood to provide a safer pathway to reach the stuck aunt

The fire crew were able to get close to the woman before laying planks of wood to provide a more stable surface to reach her.

One witness said: ‘I was getting a coffee on the high street when I saw the hovercraft going through town and down to the beach.’

‘I followed them to see what was going on, and there was already a crowd of around a couple of hundred as well as an ambulance.’

After 20 minutes the fire crew had managed to get across to the woman and after using the wooden planks to help lever her out, she was freed to a round of applause from onlookers.

Despite being entombed and at risk of sinking further, the woman apparently appeared unfazed, using her phone to keep distracted before crews arrived.

Courtney Love Shares Emotional Tribute to Harry Brant: 'I Know That My Kurt Will Be There for You'