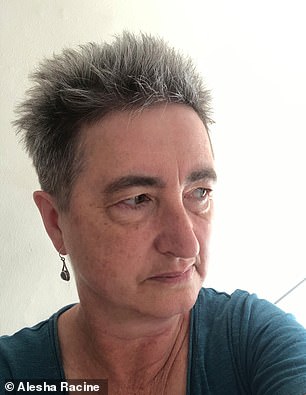 Alesha Racine, now 59, was just 11-years-old when former choir teacher Michael Walsh launched his campaign of abuse against her

The Church of England has paid out a six-figure compensation fee to a victim of historical sex crimes after she was targeted by a lay vicar as a schoolgirl.

Alesha Racine, now 59, was just 11-years-old when former choir teacher Michael Walsh launched his campaign of abuse against her.

His crimes quickly escalated from flattering remarks and physical touching to unwanted kissing and indecent assault as Alesha was told ‘this is what grown-up friends do’ and that his actions were the ‘will of God’.

Walsh, who was convicted of a string of indecent assaults against multiple children in 1990, was later allowed to rejoin his local church following his release from prison.

The convicted sex abuser and ex-teacher was invited to play music and sang in choirs in Churches across East Sussex shortly after his release in 1992, before he was later promoted to a senior position within the Guild of Church Musicians charity.

Ms Racine says she repeatedly warned church leaders – including prior Archbishop of Canterbury, Lord Carey – of Walsh’s prior conduct, and was told he would be banned before later learning they were powerless to stop him volunteering with the church.

After seeing a photograph of Walsh in front of a choir containing young girls as late as February 2020, she told the BBC: ‘I feel extremely angry that that can still be going on after all of this and after everything the church says publicly.

‘It’s astonishing. I can only assume that the authorities don’t care.’

Walsh, who continued to work as a freelance church organist, told the BBC that his role had been ‘administrative’ and he had not been near children in 30 years. 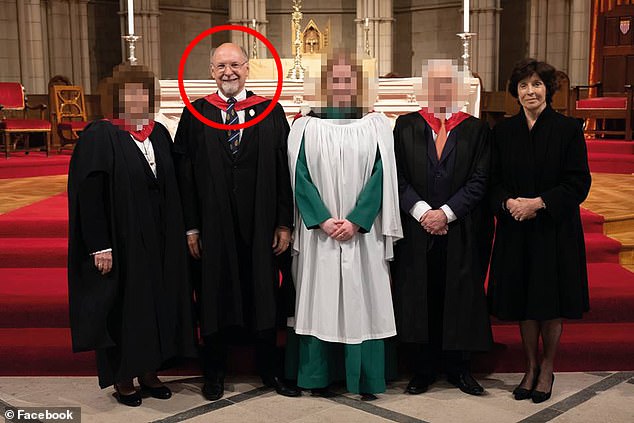 Walsh, who was convicted of a string of indecent assaults against multiple children in 1990, was later allowed to rejoin his local church following his release from prison. He is pictured here at Arundel Cathedral in 2018 with Dame Mary Archer (furthest right) after being made Honorary Fellow of the Guild of Church Musicians

Having moved from London to Chichester in the 1970s, the schoolgirl began piano lessons with Walsh’s wife, before being requested to arrive at the local church earlier than others to help set up.

As an 11-year-old she was subjected to vile abuse, including repeated unwanted advances.

Walsh even went as far as to convince Alesha’s parents to transfer her to Bishop Luffa Church of England School due to her musical talents, where he further preyed upon the vulnerable schoolgirl.

She claims the abuse persisted well into her adult life, and even after she had moved away to university to pursue a career in teaching.

Upon his release and having served just 18 months behind bars, Walsh was then allowed to rejoin his local church where he became part of the choir.

Alesha claims Walsh told her that if she rejected his advances he would force the schoolgirl to live with him and would kill her pet cat.

On one occasion where she did rebuff him, Alesha says she came home one afternoon to find her cat dead on the driveway with its throat cut.

Despite his criminal past, Walsh attended churches and cathedrals across Sussex in his capacity of General Secretary of the Guild of Church Musicians, before resigning the post in 2020.

In 2018, he was made Honorary Fellow of the Guild of Church Musicians by its president Dame Mary Archer in a ceremony hosted at Arundel Cathedral.

Ms Racine even wrote to the-then Archbishop of Canterbury, Lord Carey, telling him that her abuser had returned to the same church where she had been sexually assaulted.

Speaking at the time, Alesha said: ‘I was very concerned that my abuser had just come out of prison and it appeared that he’d just gone straight back into the parish church where he’d originally worked, and was again in a position of authority in the choir there where young children – specifically girls – sang.

‘I was really worried that these girls were at a huge risk. I felt it was inevitable that children would be abused.’ 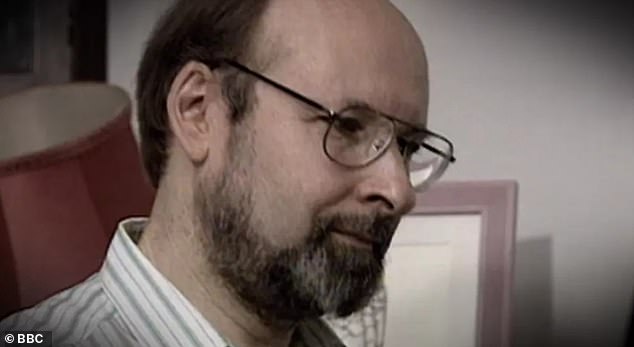 The convicted sex abuser and former teacher (pictured in 1990) was invited to play music and sang in choirs in Churches across East Sussex shortly after his release in 1992, before he was later promoted to a senior position within the Guild of Church Musicians

In 2019, she instructed Slater and Gordon’s specialist abuse team to recover damagesf or the trauma and psychological injury she had experienced as a result of her abuse and ensure Walsh was no longer able to access potential victims.

Richard Scorer, head of abuse at Slater and Gordon, said: ‘There have clearly been very serious safeguarding failings in the Diocese of Chichester with multiple convictions of clergy and other church officials for abuse of children.

‘The fact that Michael Walsh was able to leave prison, guilty of abusing children, and walk into another job at the church highlights just how lacking the safeguarding practices were within the diocese.

‘It now appears that these failings have continued to the present day.

‘This disregard for the multiple victims of Michael Walsh is shocking and this acknowledgement of responsibility from all parties involved is the least Ms Racine deserved.

‘The settlement will not change the past for Alesha. Whilst it may help her move forward, the continuing failure of church institutions to protect children from Michael Walsh has a devastating effect on Alesha and other survivors.

‘Despite the Church of England’s claims to have improved safeguarding, it appears from this case that serious breaches are still occurring.’

A spokesperson for the Church of England said: ‘Alesha Racine has shown great courage in speaking out and shining a light on important questions about managing risks presented by ex-offenders.

‘The crimes committed by Michael Walsh were abhorrent and have had a lifelong impact on the victims and survivors.

‘Since his release in 1992, he has been involved in a number of independent organisations, including the Guild of Church Musicians.

‘After a number of requests, Lambeth Palace contacted the Guild in 2019. He stepped down as role of General Secretary in 2020.

‘At present playing an organ in services, without other responsibilities, does not provide a legal basis to conduct a criminal record check.

‘Unless the law changes it will continue to be impossible to conduct such checks on organists. We continue to believe that the Government must change the law.’

Bachelorette’s Brandon: I Didn't Pull Michelle Young Aside for a Rose

Will poppy seeds really show up on a drug test?