Desperate to entertain teenage relatives visiting from Townsville last week, to even attempt to distract them from playing games on their phones for just half a day, we caught the Williamstown ferry from Southgate, chasing lunch and an ice cream. We found a lot more than gelato.

The Yarra River is not the Loire nor the Danube, and the Port of Melbourne is neither Sydney nor Vancouver harbour, two of the most breathtaking on the globe. But the flowing gutter that used to be our ugly brown “upside down river” is belatedly starting to show its potential.

Floating bars and restaurants line the busy riverbanks around the CBD – although it is astonishing that Ponyfish Island, a niche bar nestled under the Evan Walker pedestrian bridge, does not offer coffee. Surely that is treason in this city, the most caffeinated of metropolises. 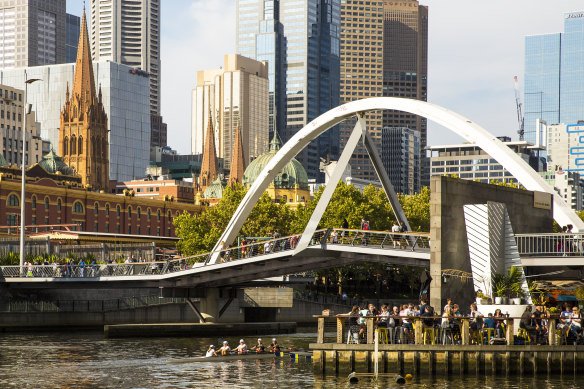 Thankfully, there are many options nearby. Busking acrobats draw an admiring and hopefully generous crowd, music wafts along the subway, a helicopter interrupts with mechanical chattering overhead. Electric hire boats glide along the water, heading up to the tennis or the Botanic Gardens with a picnic onboard. It’s a stunningly beautiful day.

Sadly, the only option for the trip downstream and across to Williamstown presently is the large glass-encased, barge-style ferry. The historic open boats no longer operate, depriving us of the

favoured option of sitting outside to enjoy the sunshine.

Classic steamboat cruises are on offer on the Yarra in heritage-restored, vintage wooden boats – but they do not venture across the bay as far as Williamstown; instead restricted to the calmer river waters around the city. The sooner we embrace the tourism potential of historic vessels the better, from this nostalgia-stricken customer’s point of view. Wherever you travel around the world, the story-telling power of vintage machinery – horse and carriage, trains, trams, ferries – makes for a compelling premium-tourism option. 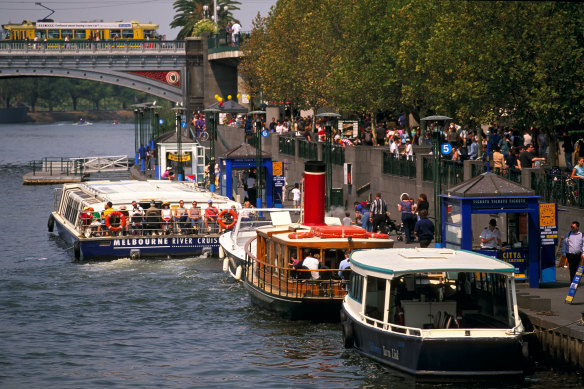 Yarra cruises have long been a great way to see another side of Melbourne.

Helped along with some classic dad jokes peppering the informative commentary from the captain, the 45-minute ride down the river and through the docks passes quickly and offers a radically different perspective on a rapidly changing and overlooked slice of Melbourne. The lessons to be learned from its history are just as relevant today.

Not long ago, visitors would have been greeted by an altogether different scene. It is only 35 years since the eyesore Allen’s Sweets factory on the southern banks of the river was demolished, triggering the domino-like demolition and gradual redevelopment of all the derelict industrial sites along the lower Yarra. 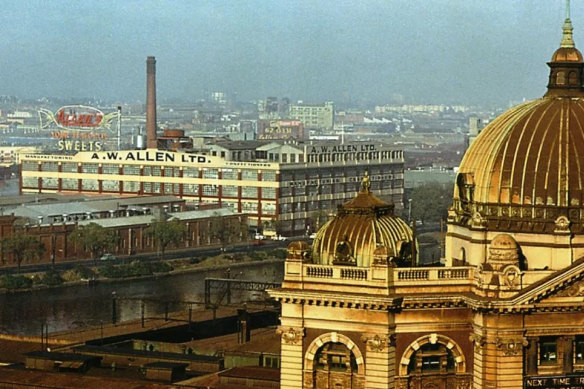 The Allen’s Sweets Factory before it was demolished.

Just a few years later, in 1990, the first stage of the Southgate restaurant and shopping complex appeared opposite Flinders Street station. But the bold vision of a linear riverside cultural and arts precinct for Melbourne was predictably interrupted by crass over-development and the politics, economics and questionable ethics of the world of real estate.

A new Melbourne Museum was under construction on the southern riverbank when Jeff Kennett was elected premier in October 1992. He ordered that works to be abandoned and the project moved to its present site adjacent to the Exhibition Buildings, compromising the remnant Carlton Gardens. Instead, the prime waterfront land was prioritised for commercialisation, and the vacated museum site and adjoining land were allocated for the eyesores that are the Exhibition Centre and adjacent monolithic casino. This irreversible vandalism of the civic vision for the river precinct must never be forgotten – it is the legacy of prioritising profit over culture. 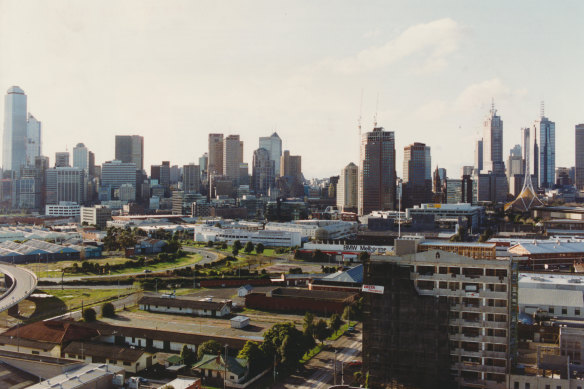 A view of the city from Southgate Tower, Sturt Street, South Melbourne, in 1993. Credit:Joe Sabljak

In the intervening years, as the adjacent Docklands redevelopment weathered its own planning storms, the riverfront slowly spawned new residential and commercial buildings all the way to the Bolte Bridge. Thankfully, many of the architectural mis-steps of the late 20th century were not replicated and some appealing structures grace the water all the way to the river mouth.

Against the wishes of the developer lobby, high-rise development has been pushed back to avoid a wind tunnel effect and the terraced and layered approach to planning has kept the sight lines along the river clean and open. Swooping bike paths float on the water or are sometimes suspended on flying buttresses to provide both a recreational and commuter option. The “eel trap” inspired Webb pedestrian and bicycle bridge stands out as much for its sculptural as its functional offering.

Compared to Docklands, the river development celebrates its available space rather than being exploited to cram in as much as possible. Rescuing Docklands from itself may take some time yet, starting with re-imagining the space to be vacated by the white elephant that is the soon-to-be dismantled, stupid giant wheel.

The developments under way at the Seafarers Mission are visually interesting, featuring balconies and open space down to the water. The newer, very expensive homes on the southern side, all the way along the promenade almost to Fisherman’s Bend, often offer both water views and boat moorings. I know little about big cruisers, but have some Russian oligarchs tried to hide their super yachts on the Yarra?

It is a busy three quarters of an hour to Williamstown and after the obligatory ice cream, there is the option of the St Kilda ferry instead of returning to Southgate. Either way, it is an eye-opener.

Bryson DeChambeau Cries as He’s Surprised by His Parents After U.S Open Win: 'I Did It!'

London studio flat available to rent for £1,083 a month has a bed up a ladder

A Very British Scandal: Who is the ‘Headless Man’ in the photos?