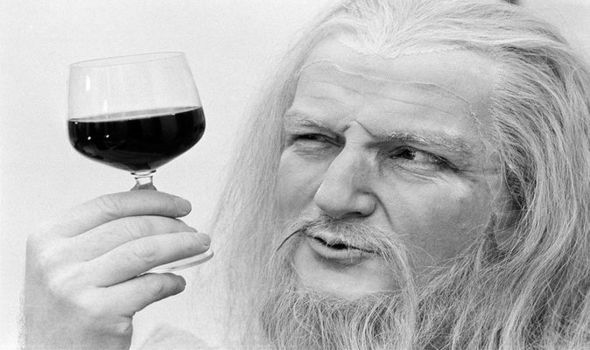 Then there was the time Oz was chatting to a pensioner on a train outside Halifax. The man told him: “When I was working at t’mill, I thought, ‘Wine’s not for the likes of us.’ Now I’ve retired, me and the wife have a bottle of wine every weekend. We enjoy a nice chaah-don-ay. It’s fruity.”

Back then, Oz and Jilly were everywhere.

The pair were TV gold and, as Oz puts it, riding the Eighties and Nineties wine boom “like a great big wave heading towards the shore”. Often mistaken for a couple, in part thanks to Jilly’s bossy (and hilarious) treatment of her larger-than-life co-star, they cut a swathe through the stuffy British wine establishment. Oz chuckles: “I was the henpecked husband. She would literally put her hand over my mouth and push me off screen while I was talking. Or steal a gag I’d rehearsed and do it before me.

“My mother hated the way Jilly treated me but I didn’t mind. People thought we were married but we never, EVER had a fling. We were very good friends and very fond of each other and still are. I was talking with her only yesterday.”

Their double act not only helped draw in some of BBC2’s biggest ever audiences, they popularised wine drinking, helped encourage the supermarket drinks boom of the late Eighties and championed the early English wine business.

Now 72, Oz, who lives in west London, retains an incredible, vigorous and passionate enthusiasm for his chosen subject.We are having lunch with – perhaps needless to say – plenty of wine at Andrew Edmunds Restaurant in Soho, central London, to talk about his new book, part memoir, part guide, Oz Clarke On Wine. Several diners wander over to pay their respects.

But for a man who helped bring about real change in the nation’s drinking habits, he modestly describes himself as phenomenally lucky. Growing up near Canterbury, Kent, where his father was a coal mine doctor, Robert “Oz” Clarke enjoyed an idyllic existence. “We had our own chickens, a pigsty; we had ducks, geese, apples, pears, plums, cherries. We had rows and rows of soft fruit, a greenhouse, every sort of vegetable. My older brother John was off at school so I was my mother’s little helper,” he says.

“At least until I was six. My dad came home one day and my mother announced, ‘I’ve found a school for Robert – St Anne’s Convent’. My dad said, ‘But isn’t that a girls’ school?’ She said, ‘Yes, but it’s a Catholic girls’ school’.

“So I went to a girls’ school. It was wonderful. You can imagine how much attention I got.

Of course, when I was 16, they wouldn’t talk to me.” His first taste of alcohol came during a picnic when, aged three, he sunk a bottle of damson wine while his parents were saving his brother from drowning. He was held upside down and whacked until it came back up.

Later, at his sister Janet’s christening, he finished off the sherry – prompting another whacking and a sore head. After that, he stopped drinking until he was 18.

“People forget how completely awful wine was in the Seventies,” he says.

“My parents drank two bottles of wine a year at home. Hungarian Egri Bikavér “Bull’s Blood” red for Christmas and Laski Riesling from Yugoslavia at Easter.

The wine we drank as students was completely filthy. It was probably Cypriot or Greek or Spanish.”

At Oxford, he studied theology and psychology and became Common Room President. More importantly, he captained the wine tasting team after being drawn to the club as a way of meeting girls.

“I thought it might make me attractive – it didn’t – but I found it easy to talk about everyday flavours in wine because I was surrounded by them during my youth.

“Back then most wine writers wrote complete rubbish. Wine almost never tastes like grapes, so you have to borrow the language from everyday life. We’d sit around a table and I’d make everyone tell me their first impressions. The flavour is there, because you found it. It’s your palate, not mine.

“If I tasted apples, I didn’t mean off the shelf from Sainsbury’s. I would be thinking of a Lady Henniker or Cox or Bramley, plucked from the tree, cut open and eaten or made into a crumble or puree by my mum.

“All those flavours are there if you can find them. Don’t tell me it’s got a ‘verdigris’ or a ‘filigree’, I’m not interested in that – and nor should you be.”

Under his tutelage, the university wine tasting team began thrashing their opponents.

“We started winning competitions all over the place and it gave me the idea of democratisation.”

But having also become interested in drama through his friend Mel Smith, his last show was a starring role in Twelfth Night. It was another stroke of good fortune.

Several leading agents and critics turned up – leading to job offers with the Royal Shakespeare Company and NationalTheatre. In the event, he became a strolling player at Northampton Rep. Yet such was his reputation in wine tasting circles, he was also offered several jobs in that industry.

“I didn’t want any of them,” he smiles. “I just thought, ‘You’re a bunch of pinstriped suits with your noses in the air and your old school ties talking about a tiny world in your cobwebby way.'” Yet as his fame as an actor grew – co-stars included Patrick Stewart and Glenda Jackson – wine continued to delight and fascinate him. He became the youngest ever British Wine Taster of the Year in 1973 and was talent-spotted by the Sunday Express magazine to launch its first ever popular wine column – aimed at demystifying it. It was a watershed moment – he was embarrassed when “they gave me more money than I was earn- ing playing Sweeney Todd in the West End” – and remains grateful to Ron Hall and Charles Wintour, the two veteran editors who taught him to write.

“We’d do it together in the editor’s office at the Sunday Express over a couple of bottles of wine. Dear old Ron, God bless you chap, you were a wonderful influence.”

Oz pauses, then continues: “I’ve always had a bit of a Peter Pan complex. I wanted to be classless, irresponsible, ageless. If you’re an ‘actor’ you can be a failure and people still respect you. You can’t be an actuary and a failure. With the wine, it’s the same. You say to yourself, ‘I’m frightened of ageing, I’m frightened of being thrown aside by society’.

“Wine renews itself every year.The vintage comes in and it starts again. If wine never gets tired, I don’t have to grow old either.”

Oz’s first book, published in the early Eighties, included just two or three pages on NewWorld wines and English wine – in those days awful – was “probably three or four lines”. He says: “I’ve got all my notes on every English wine tasting I’ve ever been to. I started thumbing through them recently, thinking, ‘God, I remember that day at Leeds Castle or Alfriston’. It would be raining and everyone would be in gumboots and raincoats and we’d be tasting these wines and saying to ourselves, ‘These are all mostly foul.They’re acidic, sulphurous and vomity’.

“Then once every eight or nine glasses, you’d think, ‘Ah, now that’s still acid but it’s got a purity, a freshness’. Even then I was seeing flickers of the English style, that hedgerow freshness we now know.”

Back in the Eighties, growers simply weren’t planting the right grapes.

“Two Americans, Stuart and Sandy Moss of Nyetimber said, ‘We didn’t come 3,000 miles from Chicago to plant apples. We came to make the best sparkling wine in the world’. They came up with those astonishing wines.

“They were followed by another producer, Mike Roberts at Ridgeview. That’s what broke the dam. It was one of those lightbulb moments. I thought, ‘I’ve never had a wine like this before.'” When he was offered Food and Drink, alongside Jilly, he was playing General Peron in Evita in the West End.

“I presumed I would go back to the theatre but somehow it never happened – wine took over. Then I wrote a book called Sniff, Gurgle and Spit.” He laughs: “It’s never been published!” But many more successful books were to follow… and he still sings with an amateur group.

Oz had first met Jilly on a flight to Australia for a wine tasting.

“I was put next to this dizzy, batty blonde with crinkly hair, great big eyes and enough energy to power a plane. We started ordering wine and drank Jacob’s Creek all the way to Australia. She was my kind of woman. I don’t know what she thought of me!”

A year later he got a call from Peter Bazalgette, a young BBC producer who would go on to create Big Brother and reality TV: would he fancy joining a new food and drink show?

“Baz was a very important person in my life. You’ve got to have them, people who believe in you. He said, ‘TV is about telling a story and having a relationship. Wenormally have one or the other but you’ve got both’. Jilly had an extra determination the show needed. I was standing there thinking, ‘I can’t believe this, I’m on telly, hello Mum!'” Aided by the rise of Australian and New Zealand wines, then those from Chile and Argentina, they talked about the subject in a revolutionary way.

“Jilly used bonkers language: nappies, hamster’s cages, hot tarmac, grease spots. People lapped it up! No one had ever tasted anything like Australian shiraz or chardonnay before. Affordable wine before the NewWorld was basically filthy. Then the supermarkets realised they were missing a trick. People would buy their Sunday roast but not their wine and I’m sure M&S and Sainsbury’s thought, ‘Hang on, why are they going down the road to buy their bottle of wine?'”

Today Oz sees the British drinks industry as best in the world and believes, post- Brexit, it will play a huge role. “Brexit has “kicked a lot of people in the a***. Now we’ve got to get on with it. I didn’t want it but it’s fundamental we stop moaning. For the brewing industry, the cider makers, the cheese makers and obviously the winemakers, this is our chance to wave our flag.”

He is concerned about tribalism in politics and on social media, and understands the “woke world” but doesn’t agree with all of it. “Friendly disagreement is one of the most fundamental pleasures of life,” he says.

As for his own career, it’s to be regretted we haven’t (so far) seen Oz and Jilly reunited and heading round the vineyards of the south-east in a camper van celebrating English fizz. (TV commissioning tastes have changed, he says).

But Oz remains happy to be tasting, talking and writing about wine as much as ever.

“We definitely set out to give people a bit more pleasure in their lives; that sense that wine is not something to be frightened of,” he adds. “You only need to know about 12 words, six countries and six grape varieties, and you know more than our parents: New Zealand, Australia, Chile, Argentina, France and Italy; sauvignon, cabernet, pinot, shiraz, merlot and chardonnay. Merlot is soft, cabernet is tougher, which do I like? Pinot noir is always light. You don’t have to read a wine book…!”