Prince Harry has shared several insights into the royal family in his new memoir, Spare, which went on sale in Spain and HELLO! has been able to access.

During one sweet moment, the Duke of Sussex speaks about how his brother, Prince William, and sister-in-law, Princess Kate reacted when they learned that he was to go on a date with Meghan Markle. The royal couple were ‘mega fans’ of Suits and they couldn’t believe that Harry was about to date one of its major stars.

He joked that he hadn’t realised they were such big fans of the show and revealed their shocked expressions at the woman he was seeing, all while telling them stories about their early dating life.

The Duke also explained his desires to be seen as equal to his brother and having a partner, hoping that they would be viewed as a foursome, something that William had tried downplaying his hopes around.

However, they ended up upsetting the Duke as they both cautioned him not to get his hopes up over the potential union. Thankfully their fears were unfounded and Harry and Meghan have been married since 2018.

Harry also shared details about Meghan’s meetings with members of his family, including his brother and father. 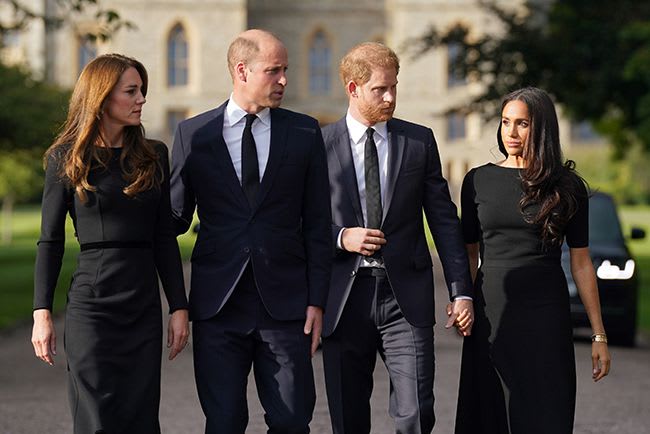 Harry wanted them to be seen as a foursome

Despite being such a fan, it appears that Kate wasn’t present when Meghan first met William, instead being out with the children, but Harry revealed the general meeting went well.

He also revealed how Meghan managed to impress King Charles and the late Queen, as she wore her hair down, a style that the pair both approved of.

Harry touches on all aspects of his life in the book, including the moment that he learned about the death of his mother, Princess Diana.

All you wanted to know about Royalty and more! Listen to our brand new podcast all about the royals.

The Prince, who was 12 at the time, reveals that his father Charles sat on the end of his bed, calling him “dear son” and explaining that there had been a car accident and that Diana had not recovered from her injuries.

PHOTOS: Prince William and Prince Harry’s relationship through the years in pictures

Harry says that he did not cry and that his father did not hug him, but instead put his hand on his knee and told him that it would be ok. He realised that Charles had already broken the news to William.

Make sure you never miss a ROYAL story! Sign up to The Royal Explainer newsletter to receive your weekly dose of royal features and other exclusive content straight to your inbox.

HELLO!’s selection is editorial and independently chosen – we only feature items our editors love and approve of. HELLO! may collect a share of sales or other compensation from the links on this page. To find out more visit our FAQ page.

How old is Nigella Lawson and is she married? – The Sun

Mario Dedivanovic Debuts Cosmetics Brand, Makeup by Mario — and His First Launch Is All About Eyes