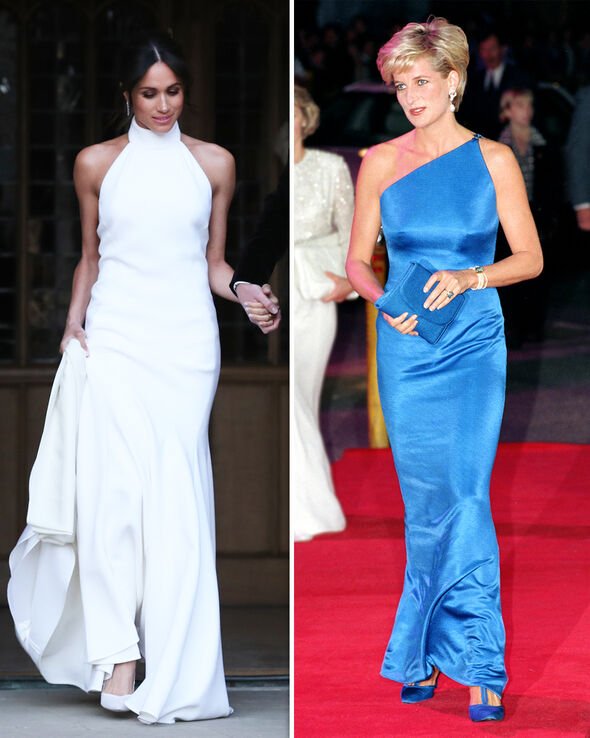 Princess Diana apparently replaced her iconic sapphire engagement ring with a beautiful aquamarine jewel which was then inherited by Prince Harry. He then gifted the ring to his new wife Meghan Markle, who wore it for their wedding reception. But why did Princess Diana choose an aquamarine jewel?

Following her divorce from Prince Charles in 1997, Diana stepped out wearing an emerald-cut aquamarine flanked by small solitaire diamonds set in 24-carat gold on her wedding finger.

The ring was made by English jeweller Asprey in 1996 and Diana was given it by a friend, Lucia Flecha de Lima.

Royal experts have read into that fact in many ways; one of which being Diana losing access to the crown collection she wore so magnificently during her marriage, and another being she probably wanted something new to bolster her own collection.

The Adventurine experts surmised: “I think, she also made the self-purchase for at least one of the same reasons we all buy something special.

“It could have simply been a pick-me-up or an amulet to mark an occasion, like a new beginning.”

The design of the ring is rather unusual; the sunshine metal isn’t a colour usually paired with aquamarines, but most are mounted in white metal to highlight the cool colours of the stone.

It is believed Diana chose the yellow because she wanted the piece to coordinate with her multi-strand pearl bracelet centring on an aquamarine mounted in yellow gold.

Diana was famous for her love of blue – the colour that matched her eyes, and over the years, she wore many blue outfits and gems.

Her choice of aquamarine most likely also carried some symbolism, and while jewellers at Asprey haven’t shared any specifics about Diana’s ring, the gem has many meanings.

“In ancient times, aquamarine was thought to protect those at sea. It was believed to make sailors fearless and safe from adversaries on the open waters.

“Today, aquamarine is still thought to bring protection to those at sea and is a popular gift among ocean travellers.

“On land, it is believed to have soothing effects on couples, helping them to work through their differences and ensure a long and happy marriage,” the experts said.

The Princess only wore the engagement twice before her death; the first appearance of the ring came when Diana attended the Victor Chang Cardiac Research Institute Fundraising Dinner in Sydney, in October 1996 – a few months after the finalisation of her divorce.

The ring was paired by a coordinating pearl bracelet with a massive aquamarine clasp.

The following year, Diana was photographed wearing the ring at Christie’s pre-auction Party in London.

The jewel was then inherited by Harry who gifted it to Meghan for their wedding reception as her “something blue”.

Later that year, the Duchess of Sussex wore Princess Diana’s aquamarine ring again for a dinner hosted by the King and Queen of Tonga.

Maxwell Stone, Creative Director at jewellers Steven Stone spoke about the value of the ring.

He said: “Aquamarine is one of the most visually beautiful gemstones. With an enchanting pale blue colour, the ring complemented Diana’s skin tone perfectly.

“Now having been passed down to Meghan Markle from Harry, it’s interesting to know that the Aquamarine’s light blue colour symbolises feelings of sympathy, trust, and friendship.

Nurse with rare form of psoriasis shows off her leopard spots