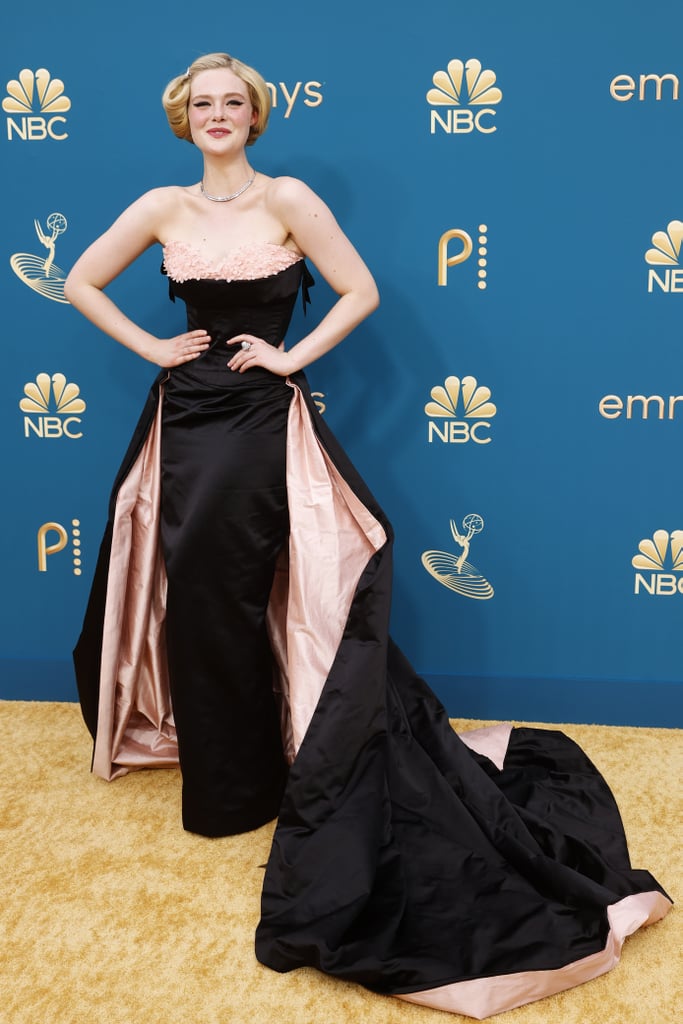 Elle Fanning walked the Emmys red carpet on Monday in a look that paid tribute to her fellow colleagues on the set of “The Great.” The 24-year-old actress wore a custom bustier dress handmade by Catherine Shaw, who is the primary cutter and seamstress on the show, and designed by the show’s costume designer, Sharon Long. “I wanted to pay homage to the creatives on our show because the world that is created on ‘The Great’ — of course, the writing but also the way it looks — is so important, and I’m very proud to wear this dress tonight,” she said during her Emmys red carpet interview.

Fanning channeled vintage glamour, styling the ensemble with a tucked bob that showed off the sweeping black gown, which featured accents of powder pink along the lining of the dramatic train. “I’ve always been inspired by the Old Hollywood glamour of the ’50s, and specifically when costume designers would design actresses gowns — like Edith Head would always design Grace Kelly’s Oscar’s dress,” she added. “It’s so special and you can see those dresses are made with love.” In addition to the thick fabric and dramatic train, another highlight of Fanning’s gown — which she had fitted while filming season three of “The Great” — was her bustier, which was overflowing with baby-pink flowers in a nod to 18th-century extravagance. On the accessory front, she chose a silver necklace, a diamond ring, and a crystal bowtie hair clip.

Why Did Brendan Leave ‘The Bachelorette’? Tayshia’s Frontrunner Shocked Fans