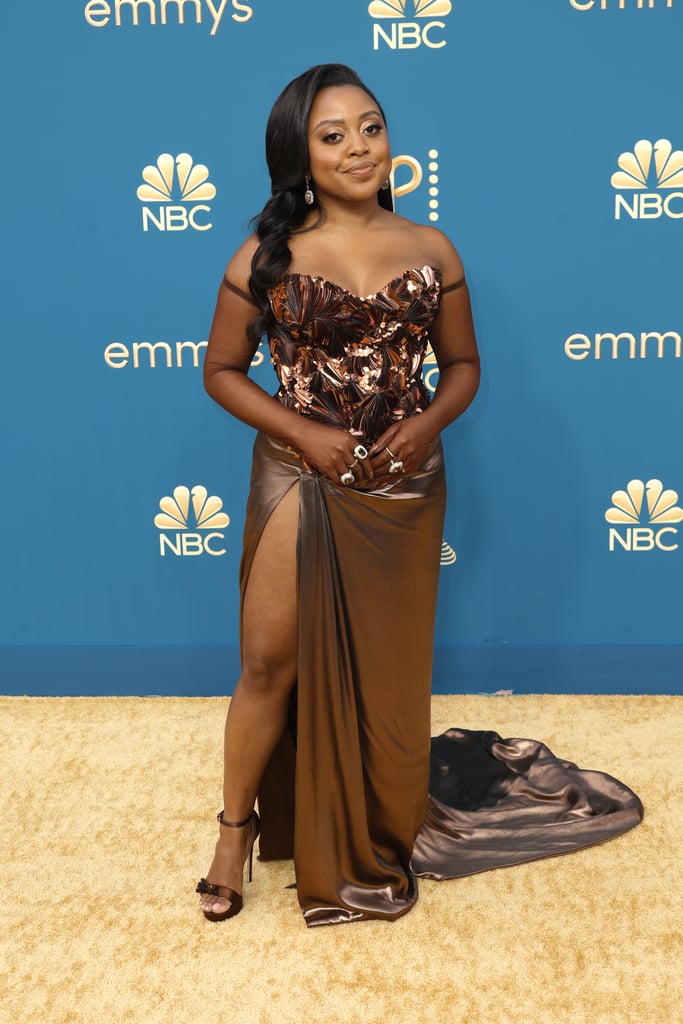 With season two of “Abbott Elementary” slated to premiere later this month and a host of Emmy nominations now under her belt, Quinta Brunson came to the 2022 Emmy Awards with a lot to celebrate. The creator and executive producer of the series stepped onto the carpet in a custom gown that featured a shining copper bustier top and metallic skirt with a small train. Brunson, 32, showed off her matching heels with a daring thigh-high slit and completed the dramatic ensemble with sheer brown gloves and an assortment of sparkling rings. Staying true to the theme of classic glamour, she wore her hair styled in side-swept, Old Hollywood-inspired waves, ready as ever for her moment in the spotlight.

Win or lose, Brunson has already made history as the first Black woman to be nominated across all three major comedy categories, including outstanding comedy series, outstanding lead actress in a comedy, and outstanding writing for a comedy series. Her Emmys red carpet look pays tribute to how far she’s come as a performer. Brunson’s metallic ensemble conveyed a sense of power and strength on the red carpet — although she’s been spotted in several stylish outfits before, including a colorful feathered number and a full gold lamé gown, this Emmys dress is among her most glamorous wardrobe choices yet. Whether or not she takes home a statue for herself, she certainly won on the fashion front. Check out all the details behind Brunson’s look from the 2022 Emmys below.

Rampaging cow rams motorcyclist off his bike in Brazil