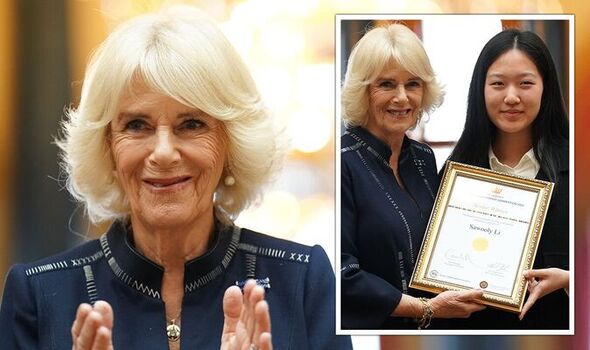 The Queen Consort held a reception for winners of The Queen’s Commonwealth Essay Competition at Buckingham Palace today (November 17). Camilla wore a dark navy dress with a plunging v-shaped collar as she welcomed people to the monarchy’s London HQ.

She kept her jewellery minimal, opting for a small pendant necklace.

Ever a fan of a brooch, Camilla donned a small blue one and she wore her go-to bracelets.

The jewel has a four-leaf clover design, and a floral motif that primarily symbolises good luck.

A classic jewel, Camilla’s bracelet can be purchased by royal fans for a hefty price tag.

The agate yellow gold version with five motifs retails for £4,250, but other versions are available for different prices.

For her outing today, Camilla also wore a pair of dangling pearl earrings.

The Queen Consort is thought to wear clip-on earrings as she doesn’t have her ears pierced.

She also wore her wedding band and stunning engagement ring from King Charles. An Art Deco emerald-cut diamond is flanked by baguettes, and it previously belonged to the Queen Mother.

Today’s reception was likely a source of great pride as reading is hugely important for the Queen Consort, and she championed reading as part of her charitable work as the Duchess of Cornwall.

The Daily Mail’s Royal Editor Rebecca English tweeted: “The Queen Consort is holding a reception for winners of The Queen’s Commonwealth Essay Competition 2022 at Buckingham Palace to recognise young and talented writers from across the Commonwealth.

“She is expected to pay tribute to the power of literacy in bringing people together.”

But as well as promoting reading and writing at today’s function, Camilla paid tribute to her late mother-in-law, the Queen.

Roya Nikkhah, Royal Editor for The Sunday Times, said on Twitter: “Queen Camilla has paid tribute to ‘my dear mother-in-law, Her late Majesty who is much in our thoughts today and who is so greatly missed by us all’ in her first speech as Queen Consort at a reception for winners of The Queen’s Commonwealth essay competition”.

The Queen Consort has worn today’s dress before for a previous tribute to the late Queen.

The caption read: “The Queen Consort is pictured with some of the 1,000 teddy bears that were left in tribute to Queen Elizabeth, and will shortly find new loving homes with @barnardos_uk children’s services.

“The bears have been scrubbed up to look their best, before they are delivered to their new home.”

One in six Brits don't know the signs of financial abuse

Next, River Island and TKMaxx shut down websites after closing stores to keep staff safe during coronavirus – The Sun

Davido Back on Instagram One Week After Son’s Death