You probably already know this, but just in case, let me preface this post with the following: there is nothing, I repeat, nothing Rihanna cannot pull off. If you disagree, I’m willing to to provide a detailed Powerpoint presentation featuring her most daring and iconic looks, many of which she’s #blessed us with in just the past few months. Rihanna’s gold nails on the cover of Garage magazine, for example, just made every basic gel manicure I’ve ever splurged on seem basic as heck. I’m not mad, though — I respect a style queen when I see one.

I think the reason so many are drawn to Rihanna’s sense of fashion is that it combines inspiration from a variety of styles, so there’s literally something for everyone in each of her looks. When she rocks a sporty, athleisure look, her face is usually beat to the gods with a sick contour. When she’s dressed in a gorgeous gown on a red carpet, her accents and accessories are usually edgy and tough, from heavy, metallic clutches or jewelry to super-sharp, fierce, winged liner. The balance of feminine and tough is what creates her air of cool-girl chic, which so unmistakably Riri.

Exhibit A: Riri pairs simple, straight hair and understated, natural makeup with the blingiest of jewels and geometric, statement shades: 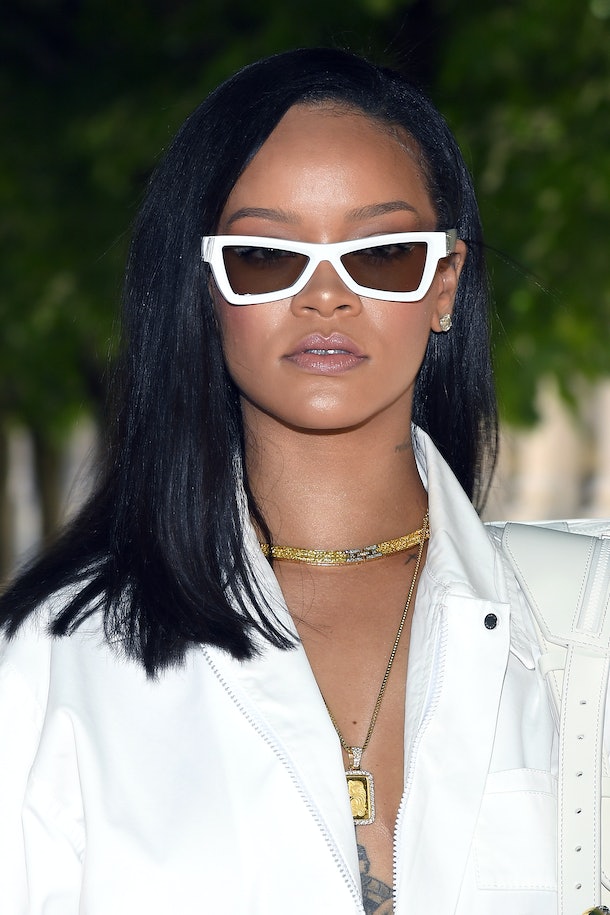 Exhibit B: To the Oceans 8 New York premiere, Rihanna rocks a super femme pleated, purple gown, but pairs it with a Vampire-chic lip and super-slicked hair to edge it up and ensure the dress doesn’t overpower her. 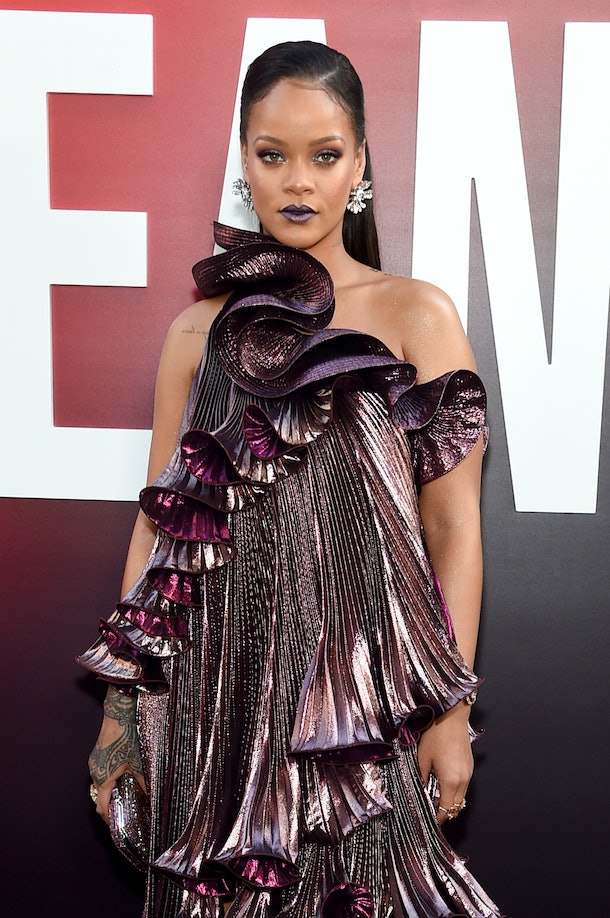 And of course, Exhibit C: Rihanna’s new Garage magazine cover, on which she contrasts a frilly, floral, pink top with the longest metallic talons the world has ever seen grace a cover:

I mean, we’re talking about a big mood here, people:

So whats the scoop on these gold nails? Jenny Longworth, a London-based nail artist, is the mastermind behind the look, and she’s got me thisclose to hitting up a craft store and gluing every teeny tiny gold object I can find onto a pair of press-ons. The effect won’t be half as glam, but after seeing this detail shot, can you blame a gal for trying?

When you make sure they can’t fit gloves over those nails? @badgalriri behind the scenes for @garage_magazine ????????? Nails by Me Make-Up by @lisaeldridgemakeup Hair by @yusefhairnyc. Also special thanks to my right hand man @hannahbondnails

Longworth captioned her Instagram post, "When you make sure they can’t fit gloves over those nails," alluding to her previous work with Riri for that iconic thin-browed British Vogue cover, on which her handiwork was hidden by a pair of orange knit gloves.

New Work!!! @badgalriri for the September issue of @britishvogue, styled by @edward_enninful and shot by @nick_knight, on newsstands Friday August 3.  Wearing a @prada dress and gloves @savagexfenty lace body. Hair by @yusefhairnyc, make-up by @isamayaffrench using @fentybeauty, floral artistry by @azumamakoto, nails by @jennynails and set design by @tomotattle

There’s also been a few instances of nail embellishment, and I will never say no to a little bedazzling (peep the pointer!):

#TBT Repost @hk_details When you finally find that close up of a nail look u were searching for ❤️?❤️ @badgalriri #jennynails #jennylongworth #nailart

With Rihanna serving some of her most daring looks to date recently, it’s no surprise that she felt the need to keep her nail game equally strong. Tons of celebs have been showing off their tips as of late — please see Kylie Jenner’s monochrome ombre moment if you need further convincing (and then head directly to my apartment with five varying shades of pink nailpolish, thx.)

Maybe this is a "wild thought" (Rihanna song reference, get it?), but perhaps Riri’s recent nail game alludes to future Fenty Beauty releases. Would a metallic gold nail kit not be the pièce de résistance to a festival holiday collection? Give the people what they want, Rihanna! You can’t serve us these ~lewks~ and then not help us recreat them!

Maybe we’ll see some nail goodness from Fenty Beauty soon, but until then, I’ll have to live vicariously through Rihanna’s epic looks. After all, if only one of us can look incredible, it might as well be her.

Elon Musk wants to make (some) people pay to use Twitter

21 Best Slimming Spring and Summer Dresses on Amazon — Under $40!

When is Februrary half term? School holiday dates 2021 explained