Home » Lifestyle » A Legendary Photographer Breaks Down His Images Of Missy Elliott, Aaliyah, Eve And More

These days, there are endless resources to shed light on important moments and figures excluded from schools’ lesson plans. But before the ‘gram, photographer Eric Johnson was doing the work to prevent our stories from being written out of history.

Most recently, Johnson photographed Chloe x Halle for the cover of ESSENCE’s 2022 September/October issue. Like for all of his images, went beneath the surface to tell a story. Johnson was sure to depict the sisters’ bond, an idea that came to them while watching a video of the sisters dancing.

Johnson also kept the environment—even the elements that wouldn’t quite make it into the frame—top of mind. After photographing the duo in Atlanta, their hometown, he said, “The place and the pairings of people and everyone on set ended up being such a natural vibe that you’ll see the vibe in the photos.” 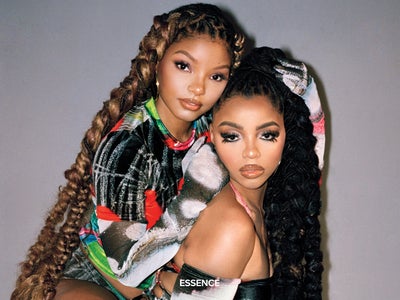 At 16, Johnson discovered his connection to photography at a performing arts high school in Newark, New Jersey. Following his high school graduation, he attended New York City’s Fashion Institute of Technology and began his professional journey of assisting other photographers and capturing the NYC scene.

“I just feel like no one’s going to know your story or your friends’ stories better than you and your friends,” he tells ESSENCE when reflecting on the importance of documenting Black experiences “So I feel like in a way, that gives you an edge in regards to that the one thing you can do better than anyone is tell your own story.”

Johnson, widely known for capturing some of the most famous musicians of the last three decades, details many of the opportunities have been organic. “It was great being a kid in New York City and going to clubs and meeting other quirky characters throughout the city, and hip-hop and everything just started coming up at the time when I was coming up as well,” he remembers. “It was a great exchange, and I feel it’s very telling through my personality. I’m just so chill to bob and weave through different stories in a way but still be true to myself. That’s why I’m still here doing this.”

To celebrate Johnson’s first ESSENCE cover, we looked back at some of his most iconic images as he shared backstory for each.

At that point, there were big budgets to make videos and everything looked so stylized, so I was like, “Oh, it would be great to just get photos of them that look more indie and spontaneous.” And the record company, the art department, was just like, “Oh my God,” they still tell me, “That’s my favorite shoot of all time.”

It was such a casual approach to photography – especially for an artist that was platinum. So, yeah, the art department, everyone was just really living. Then it was like some of the suits were just like, “Yeah, no. I’m not into it. Whatever.” But I was just so comfortable in my skin and I could tell this is what it was supposed to be.

Then all these years later, the internet comes and this photo becomes so huge. You know what I’m saying? So, I’m like, “That is so interesting.” And then for the whole culture and everyone to be like, “Yo, look how important that photo is.” So, that’s a nice feeling when that happens.

I feel like she was just so official. The ideas she came with, like the references and everything were so tight, especially for a young music artist. To see a Black musician, that age, be so detailed about the aesthetic, and the story, and everything was so cool. I knew this was going to be the hottest project. We all just knew it.

We shot it in Newark at her high school as well. She’s one of my favorites.

At this point, we are all just finding out about Missy Elliott, you know what I’m saying? With the “Supa Dupa Fly” video and just all the guestings. Everything she did was definitely blazing. I’m young, too, at this time. Her music’s getting played in the video. She’s showing up for shoots for Rolling Stone. I’m shooting the shoots for Rolling Stone. It’s such a hot time for everybody and we were all bumping into each other and creating great stuff. It was a really hot group of people and I was lucky enough to get connected to a lot of it.

I was not trying to be edgy – neither of us were. For people who’d done darker photos, herself and myself, too, I feel like something about our connection was a certain way with each other, which is what this was. I shot this around the time when there definitely was a classic beauty and clearly, that was our story to tell. We didn’t know each other before then, but we read each other’s vibes really well.

Outkast is just Outkast. They’re from Atlanta, so I never crossed paths with them before, but I was into their music. I think they asked me to shoot them. This is just one photo, but at this photo shoot, I shot Andre, Big Boi, that’s Outkast, and then I shot Bootsy Collins with them, as well. Then I shot them all individually.

The entire Dungeon Family was there. That whole day we had this big loft downtown – my friend Roger’s studio – it was just full, everybody from that whole crew. It was a really fun day, too. I’ve got photos of them just hanging out in the studio. If you look this way, you’ll see these studio photos, but just turn around, and it was just chaos, and just all of these people. That always, I think, contributes to why the photos look this way too.

I was quick to bring someone outside and bring them onto the street, because I love when I look back at classic photos, and you’ll see a photo of Marilyn Monroe or Bob Marley or someone in the street, and they’ll say it represents that moment. There’s something that I never get tired of seeing with that. Because of the way that I shoot, I could shoot in a studio, and we can come downstairs for 10 minutes and shoot on the street.

I love this particular photo. I think Foxy was just so beautiful. Every time she came over, I was just like, “Wow, I don’t think people are talking about your beauty enough.” Those eyes… I was like, “Wow, you are breathtaking.” She was so chill, as if she didn’t know if you were playing or trying it..

You just organically catch people at certain times. In this case with Eve, I remember she was working with [celebrity stylist] Kithe Brewster and she was aware of what she could do with fashion. I feel like not only were they pulling these looks at the shoot, I hadn’t seen her with the looks like that yet. I was like, “Oh, she’s ready for that.”

It was really great to be a part of that, without even being initially in on the plan. Sometimes that’s how it goes. They tell you to show up, and you show up. If you’re good with working on the spot and reading the room, that’s cool, too. It all just really made sense.

There’s another great photograph of her on the street, black and white photo. These kids are following her around, and it was on the Lower East Side, and she’s wearing a strong look. We got lots of good things from that shoot.

I went to New Orleans and I really think that the first time I went was for, I think Juvenile, because Juvenile blew up first from that group. I’m going out to New Orleans to photograph them and shoot all the Hot Boys, all of them together.

Then by the second time I’m going out there, Lil Wayne is really hot. He’s blowing up. I think this time, basically what we were doing was it was just a bunch of us. We all had cars, and we all spent the day driving from one place, to the next place, to the next place, and I photographed it all. This was sneaker shopping, we went to the record store, went to the barbershop and went to get food. I just spent the day with them and at each place, we jumped out and took photos.

This was going to be their first single. Apparently Puffy wanted me to do it, so I did their first shoot. It was for their single, “Can’t You See.”

So I’m in this alleyway, and they keep changing positions and then they’re like, “Yo, what you got for me, Mr. Photographer? What you got?” It’s like something about that is very telling when you look at the photos. And my personality, once again, is going to be cheeky with them too to be able to capture the moment. They had such a fun entourage. We were just playing music, moving and rotating positions.

Stacey Abrams Wants You In The Census Fight With Her

Bristol Palin on Brother Track: ‘He Makes His Own Decisions’