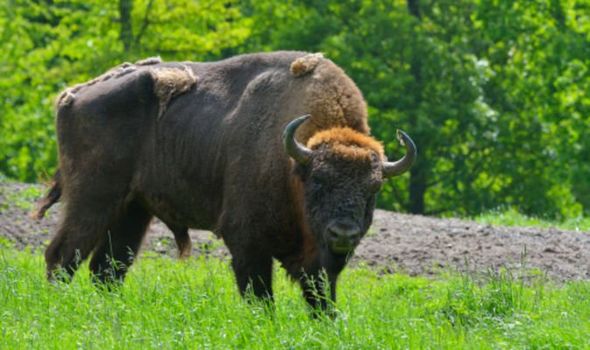 It is thought to be the first time the animals have been introduced to a UK nature reserve to help wildlife. The move is part of a £1million project led by Kent Wildlife Trust and the Wildwood Trust to help manage Blean Woods near Canterbury, Kent. European bison, the continent’s largest land mammals, are the closest living relatives to ancient steppe bison which would have once roamed Britain and naturally managed the habitat, conservationists said.

A herd of four European bison will be introduced into a fenced enclosure away from public footpaths.They will be within a wider 500-hectare (1,200-acre) area that will also use other grazing animals such as Konik ponies to create varied habitat.

Despite their size, with adult males weighing up to a ton, bison are peaceful, the experts say, and no other species can perform the job of engineering the habitat in quite the same way.

They fell trees by rubbing up against them and eat bark, creating space and light and providing dead wood that will help fungi and insects such as stag beetles. Bison releases have helped boost wildlife in other countries and give people a wilder experience in the countryside, according to conservationists.

The project is funded by £1,125,000 from the People’s Postcode Lottery Dream Fund, created to allow charities and good causes to deliver their dream project over a two-year period. Kent Wildlife Trust, which owns several woods in Blean, one of the largest areas of surviving ancient woodland in England, will be responsible for the overall management of the project.

Wildwood Trust, a native species conservation charity, will be looking after the animals and ensuring their welfare.

Paul Whitfield of Wildwood Trust said: “The partners in this project have long dreamt of restoring the true wild woodlands that have been missing from England for too long.

“This will allow people to experience nature in a way they haven’t before.”

Paul Hadaway of Kent Wildlife Trust said: “The project will prove that a wilder, nature-based solution is the right one to tackle the climate and nature crisis we now face.”

It's About Time We Saw Those Rainbow Cs! Coach Launches Its First-Ever Full Pride Collection

Natalie Morales is leaving NBC News for The Talk

Are You the One? Is Back — and a Potentially Explosive Love Triangle Has Already Formed