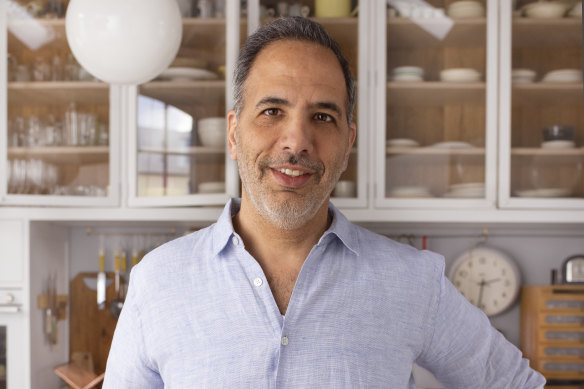 Israeli-born, London-based chef Yotam Ottolenghi says we need to be playful with food.

Authenticity is one of the big issues of our time. Stories and who gets to tell them, the real or authentic voices movement, and concern around cultural appropriation are a significant focus in publishing, particularly when it comes to food. But who gets to decide what is authentic?

For Yotam Ottolenghi, it’s not black and white; the discussion is far from straightforward. “If you ask me, I think the word authentic is really misused a lot because … in the general understanding, the word means very little,” he says. “Before you say authentic, you must ask authentic to whom?

“Authenticity assumes that there is a basic line from which we draw inspiration, that every culture has a particular set of recipes that are cooked in one particular way, and this is just not the case. Every family has a different way of cooking certain recipes, and traditional dishes are played around with, and they change and evolve.”

The Israeli-born, London-based chef is responsible for spearheading the vegetable revolution, placing them centre stage in his sumptuous recipes rather than sides; he has two restaurants and five delis across London. Together with Bahraini-born chef Noor Murad, he has just released his 10th book, Ottolenghi Test Kitchen: Extra Good Things. 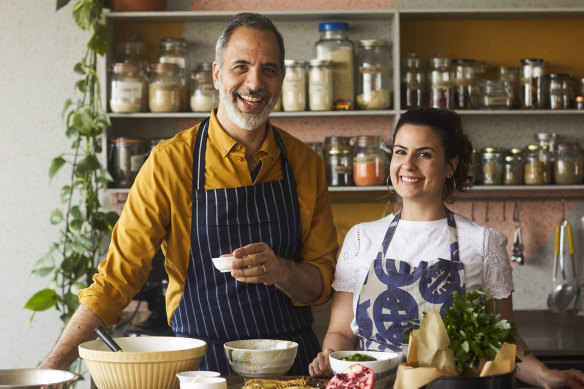 <i>Extra Good Things from the Ottolenghi Test Kitchen</i> was written by Noor Murad and Ottolenghi.Credit:Elena Heatherwick

Speaking ahead of a visit to Australia later this month, he argues it all depends on perspective, “on how and what you choose to see”. Traditionalists might look at a dish and say there’s only one way to make it, others would argue it’s absurd to think food – like all other fashions – would not evolve and change over time.

“Jamie Oliver got into terrible trouble when he added chorizo to paella. I think this is just petty,” Ottolenghi recalls, referring to the outcry over Oliver’s variation on the classic dish in 2016. “I don’t think anything is really at stake if someone wants adds chorizo to paella. If they want to eat it that way, there is no harm in this interpretation of one version of a Spanish dish. I think these conversations can become quite circular, and they are not very helpful.“

For him, it’s all about being playful. We should be playful with food and cooking and each should be authentic to a person rather than a culture or a group. “Authenticity should be relevant to what you’ve gone through, what is relevant to you.”

Context is significant though, says the 54-year-old chef, who argues it’s important to tell the story of a dish. “If you do draw inspiration from somewhere, if something has a particular origin, if it’s from a particular part of the world, it’s really good to tell that story, so nobody feels hard done by when you talk about it. It’s about measure and how you convey.”

There is that sense that food has been relegated to … a necessity rather than something sensual that needs to be celebrated.

Growing up in Israel, Ottolenghi was born into and influenced by several cultures; his parents were both Jewish, his mother from Germany, his father Italy. Then there were the particular Jewish and the Palestinian cultures of his hometown Jerusalem. His first food memories – visits to the fruit and vegetable markets in West and East Jerusalem, which he describes with palpable excitement – have coloured his vision for food in the long term.

“These are the markets that we know in our minds how they work. There’s incredible, beautiful produce, fruit and vegetables piled up, incredible herbs like dill and coriander and mint, eggplant and beautiful fruit like peaches, strawberries, you know, everything that grows in the country is presented and beautiful.” 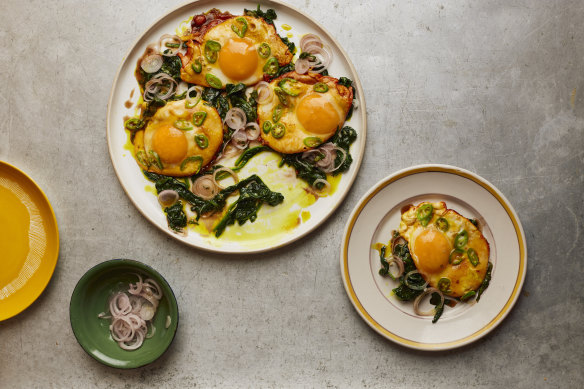 Turmeric fried eggs with tamarind dressing from ‘Extra Good Things, from the Ottolenghi Test Kitchen’, by By Noor Murad and Yotam Ottolenghi.Credit:Elena Heatherwick

The pungent aroma of the herbs, intensified as they were often sprayed with water by the stallholders to keep them fresh, stays with him today. Jerusalem then and now has really good produce, cheeses and meat, halva and tahini, he says, seeming to savour the idea as he pictures it in his mind. “The Jerusalem of my childhood and still today is divided into west and east; the west is mostly Jewish, and the east is mostly Palestinian and these two communities often don’t get on, but the food in both sides is quite incredible.”

At that time, not long after the 1967 war, Jerusalem was “slightly more peaceful”. “In the 1970s and 1980s, the realities of the occupation and the conflict had not really fully been realised,” he says. “It was before the Israelis took over the West Bank… I’m probably of the last generation who felt that there was a chance it was going to be OK.

“We spent a lot of time visiting wonderful places in the West Bank like Bethlehem and Jericho, those were fantastic places both in terms of the landscape and the food and the people who we met were incredibly open, hospitable and friendly. It wasn’t like people lived together in harmony side by side but it was a relatively peaceful reality and when it was like that it was pretty magical.”

“You could go to East Jerusalem and get wonderful Palestinian mezze, fried cauliflower and labne, and eggplant dishes like babaghanoush, and in West Jerusalem, you would have restaurants for Jews who had just recently arrived from all over the world – Iraqi, North African, Eastern European, Moroccan, a really incredible array of food. All of that was the food I grew up within the wider community.” 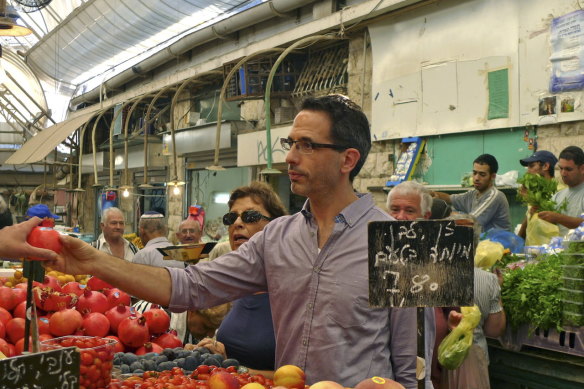 A young Ottolenghi at a market in Jerusalem.

At home, meals were mostly European. His dad loved making fresh polenta, salads and pasta dishes, cooked in the northern Italian way, with minimal intervention. It’s interesting that’s what he grew up with, when his food is almost the opposite. He laughs, agreeing his preferred MO is definitely maximalist.

Why are some cultures so into food and others not, I wonder. Some approach food as sustenance and necessity whereas for others it is inherently celebratory. “It’s a really good question. I think deep down inside, all cultures are into food. In the modern world, unfortunately, there were historical reasons for which some cultures forgot their food, or [for which] cooking has become less important,” he says.

“In the Anglo-Saxon, English-speaking world – it’s a gross generalisation – but there is that sense that food has been relegated to … a necessity rather than something sensual that needs to be celebrated as all the sensual things we can experience in the world.”

To Ottolenghi’s mind, in industrialised countries people often forget the importance of sitting down to eat. “You’re in the office, you’re busy, you go grab a sandwich, whereas in France, it’s the opposite, every meal is a meal. It is a very cultural thing and I would really love it to come back as a family ritual.”

My kids in the last few years have become more willing to try different things. I don’t even take credit for that.

That said, the pandemic has helped many people rediscover the importance of sitting down to a meal. It was one of the few things we looked forward to, that provided punctuation and interest in our day. “We had to replace our modern rituals with older rituals and people discovered how wonderful those older things are,” he says. “You had to divide the day and food and meals are so fundamental in that.”

Together with husband Karl Allen, Ottolenghi has two young boys – Max, 9, and Flynn, 7. Does one of the most famous chefs in the world have issues getting his kids to eat good food? How do they respond to his vegie-forward feasts?

TAKE 7: THE ANSWERS ACCORDING TO YOTAM OTTOLENGHI

“It’s always tricky, it comes in waves; it’s never what you think it would be. So one time you think you’ve mastered it and your kids are super-adventurous and then, something changes, and they are not quite as adventurous as they were the other day,” he says with a laugh.

“My kids in the last few years have become more willing to try different things. I don’t even take credit for that, I think it’s just part of the normal process of opening up to the world and being more adventurous.

“My kids are full of contradictions; they love mussels but they won’t touch raw tomatoes. You never quite know. It’s all fun in the end if you don’t take it too seriously.”

What he does is create meals that work for adults and children alike, not making what he sees as arbitrary distinctions between the two – apart from toning down spices a bit. “One thing I hate is the kids’ menu – could someone not have been more creative, and are kids as boring as all these menus read all over the world? You know with that perennial pasta and pizza and burger… I do think you do need to do something with food for kids, but sometimes I think people take off their thinking hats and just throw whatever at them.”

Despite spending much of his time in the restaurants and test kitchens around food, Ottolenghi still loves to cook at home. “I do love cooking on the weekend when we’ve got friends or family over. I cook very much in the same way as we cook in the restaurants and in the books, I like to serve big platters; it’s all very informal,” he says. “Spending all Saturday or Sunday around the dining table, for me, it’s the best way to be with other people – with food around, it’s just so enjoyable.”

Farmer and his GOAT babble at each other in hilarious 'conversation'