‘I married Giles for his humble 2002 Ford Fiesta’: As Britain’s most popular car faces the end of road after 46 years, ESTHER WALKER looks back at her memories of the iconic motor and admits her ‘bottom lip begins to wobble’

My  passion for cars is an unlikely one. Having not even passed my test until I was 27, I’d never go misty-eyed over pulse-racing acceleration or a seamless gearbox. And yet . . . mention the first car I shared with my husband, Giles — a dark blue, manual Ford Fiesta Zetec that he bought new in 2002 for £10,000 — and my bottom lip begins to wobble. It was the first car I ever fell in love with, and in no small part why I fell in love with Giles. So it is with fierce, unquestioning loyalty and something akin to devastation that I hear Ford is potentially discontinuing this British institution — the most popular car in this country ever — next year. I was introduced to Freddie the Fiesta in 2007. Giles dropped me home in it after our first date and I distinctly remember thinking it said something really good about him that he owned such a modest car. I have always thought men who care a great deal about what they drive are vain and weird. 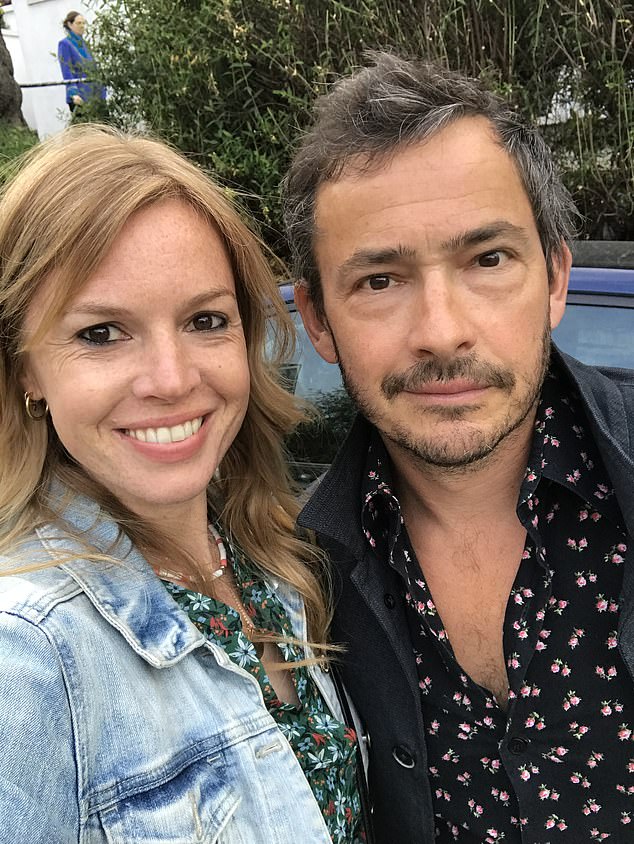 A few months later, he was driving me to interview the civil rights lawyer Michael Mansfield KC when we got a flat tyre near Buckingham Palace. Unruffled, Giles calmly changed the tyre on his own, chatting amiably to a policeman who hustled over to see what on earth we were up to.

I think that was the moment I knew I would marry him. That sheer multi-tasking ability alone made him a keeper.

While dating, we tootled all over the country in the Fiesta. It wasn’t quite the mini-break car of dreams — the Fiesta tended to rattle a bit at any speed over 50 mph and looked ridiculous next to the Range Rovers and sports cars in posh hotel car parks, but that just made us laugh.

When we met, I couldn’t drive, even though I was 27. I grew up in London and hadn’t ever felt I needed to. But I took it as another good sign that Giles and I didn’t kill each other while he helped teach me (though I did my best to kill the poor Fiesta, once ramming her so hard into a kerb, the tyre blew again — lucky Giles was so good at changing them).

My first solo voyage was to take rubbish to the council tip in Kentish Town. It felt thrilling, bordering on illegal, to be driving around on my own. That sense of freedom was something I hadn’t experienced since I learned to ride a bike. 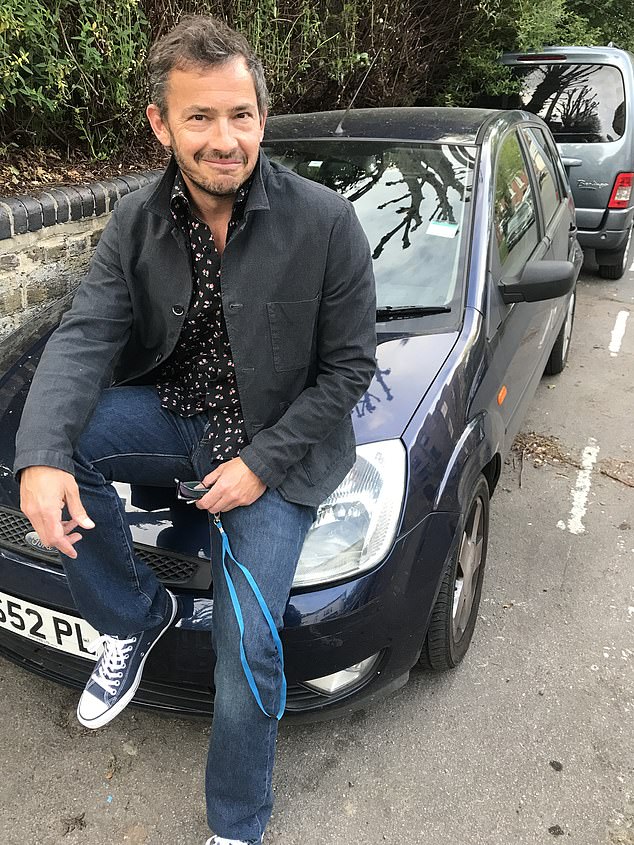 Giles and I got married in 2010 and our first child arrived the following year. On a dark evening in early February, he drove me to the hospital and I remember bracing my hands against the Fiesta’s spongy grey ceiling fabric as I gasped in pain at a contraction

Driving, I quickly discovered, was the best thing in the world and something I was good at. I have never had an accident and I can parallel park any car into the tightest of spots. (Just don’t ask about the parking tickets.)

Giles and I got married in 2010 and our first child arrived the following year. On a dark evening in early February, he drove me to the hospital and I remember bracing my hands against the Fiesta’s spongy grey ceiling fabric as I gasped in pain at a contraction.

We drove to the hospital as two, but returned as three, with baby Kitty looking absolutely tiny, like a prawn in a blanket, slotted into her car seat in the back.

The Fiesta took on new significance once we had children. When I did have a few hours off from nappies and bottles, the thing I most wanted to do was get in the car and just drive off. Often, I would find myself setting off for Brent Cross Shopping Centre 20 minutes away, even if I didn’t really need anything. However jangled and tired I was, my shoulders had come down from around my ears by the time I pulled into the car park.

A two-year-old Kitty christened the Fiesta ‘Freddie’, and the name stuck. Freddie became like a fifth member of the family.

Both children spent hours having impromptu naps in Freddie, lulled to sleep by her easy motion and familiar, slightly musty smell.

As a family, we sometimes wondered what Freddie would look and sound like if she were a person (we also do this with our two cats). Would she be a tough old lady who had seen a thing or two? Maybe a rebellious posh girl?

About 2017, when Freddie was 15 years old, she started showing signs of age. The air conditioning was long broken, but now the steering wheel was peeling, too.

Despite regular cleaning, the inside was stained and everything was scuffed.

As Freddie pre-dated smartphones, I kept a portable Bluetooth speaker in the glovebox. 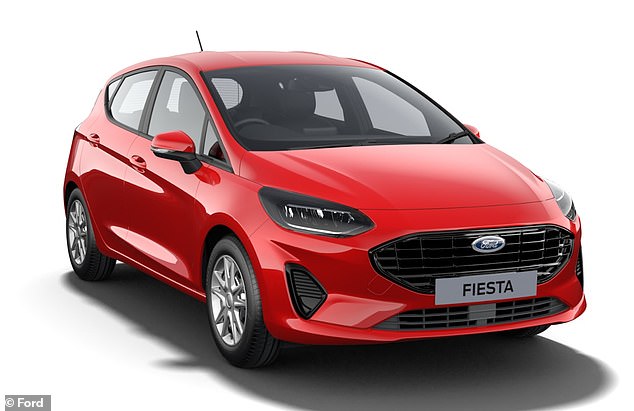 Pictured: 2022 Fiesta. The five door hatchback is likely to be withdrawn from sale in the coming years, with the three-door vehicle already scrapped in Spring this year 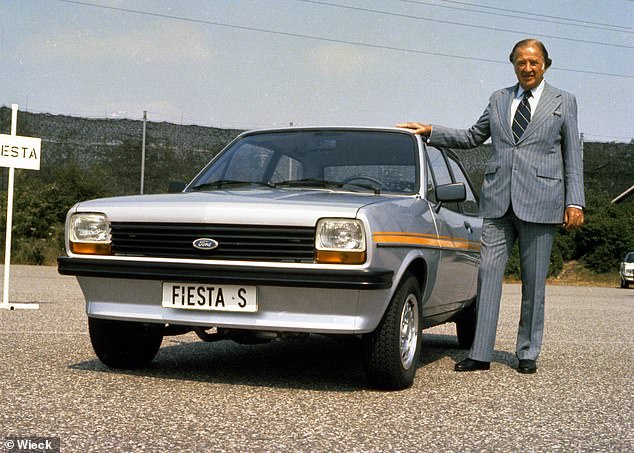 Henry Ford II pictured standing alongside a Fiesta S in 1976, the year the car was first launched to the market

Her slight shabbiness never mattered to me and I rather judge people who keep their cars super-neat — the idea of motors as status symbols has always struck me as inherently naff.

Freddie was tough and practical, she was quick off the lights, slipped through small gaps in heavy London traffic and could park on a sixpence. What more could you want?

When in the same year Ford announced its scrappage scheme, which paid out £2,000 for any Ford vehicle registered before 2009, there was no question of our taking part in it.

But clouds were gathering. The following year, Giles said: ‘Freddie needs a new gearbox and it’s going to be £700. Perhaps it’s time to . . .’

Giles felt great affection for Freddie, but she wasn’t his first car — it wasn’t the same. I also knew Giles was hankering after something a little smarter, a car that didn’t have a small dent in every single panel, that could do more than 50mph on the M4.

I was hugely relieved when our mechanic, Andrew, agreed with me. ‘£700 is more than she’s worth,’ he said. ‘But not more than it would cost to replace her.’

So Freddie got a smart new gearbox and, shortly afterwards, a new battery when hers conked out on a rainy Tuesday morning in 2018. 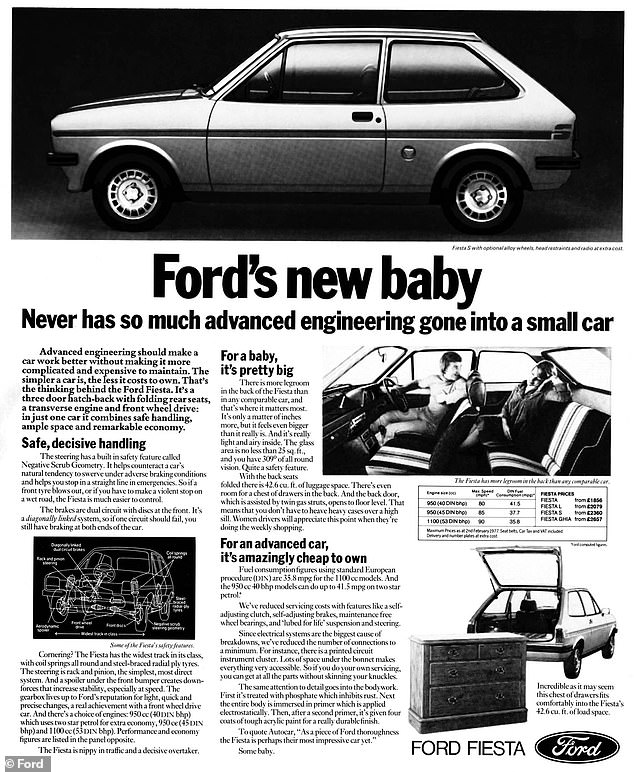 A 1977 advert for the Fiesta. One of the biggest selling points to potential customers was the fact it could carry a chest of drawers if you lowered the rear bench seat 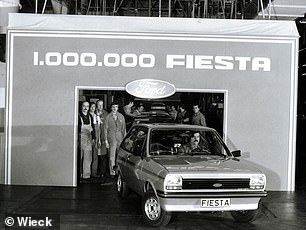 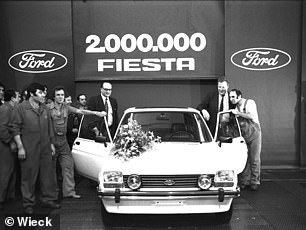 by 1979, Ford had produced its one millionth Fiesta for worldwide sales. The two millionth example followed well before the second-generation Fiesta arrived in 1983

In 2019, Freddie’s electrics began to fail and she started randomly turning the volume on the radio rapidly down to zero, which made it seem as if she didn’t like the song being played. But she soldiered on. In the same year, to celebrate our wedding anniversary, Giles and I drove in Freddie to our favourite restaurant.

And then, one afternoon in early 2020, as Giles was driving Kitty and Sam home from a friend’s house in Queen’s Park, the end came. Freddie spluttered, coughed and then ground to a halt and could go no further.

Andrew, this time, couldn’t provide any comfort. Freddie was 18 years old, so despite just 56,000 miles on the clock, she was just too old and had to go.

When she was loaded on to the flatbed truck in our street where she had lived her whole life, I couldn’t watch. The children cried.

We replaced her with another Ford Fiesta, which was a great car, but this new and slinky model had none of Freddie’s early-Noughties charm.

I wasn’t sad when it was stolen six months later. (The Ford Fiesta was the most stolen car of 2021.)

After that, Giles finally got to buy the car of his dreams, an electric Jaguar. It’s fantastic, don’t get me wrong (though good luck changing a tyre, darling), but it’s not the same as Freddie.

No car ever will be.